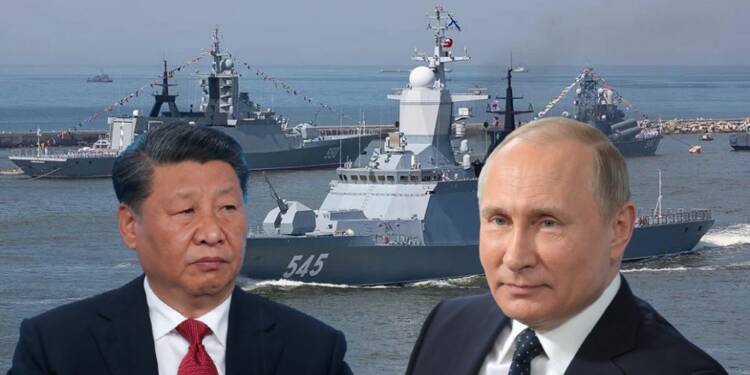 The situation of Chinese geopolitical gameplans is in tatters, and the situation is getting even worse. While Beijing has tried to increase its presence in the Indo-Pacific and offset the traditional powerhouses of different parts of the whole Indo-Pacific, the efforts have backfired. Now, not only the western powers, but even Russia has entered the Indo-Pacific tug of wars. According to a source close to Crimea’s security forces, a detachment of Pacific Fleet ships and submarines has reached the Indian Ocean as part of a shift from the Baltic to permanent deployment locations.

“A Pacific Fleet detachment led by the corvette Gremyashchiy is now sailing in the Indian Ocean after crossing the Bab-el-Mandeb Strait and going through the Gulf of Aden,” the source said. The Black Sea Fleet’s Captain Guryev rescue tugboat is escorting the Pacific Fleet’s corvettes and submarines. All the while, China has been trying to chip away Russian influence in Russia’s neighbourhood and zone of interest, but now Russia has brought the challenge right into the Chinese arena.

The Gremyashchiy is a Project 20385 lead corvette that was laid down on February 1, 2012, at the Severnaya Shipyard (a subsidiary of the United Shipbuilding Corporation), floated out in June 2017, and given to the Navy on December 29, 2020. The Gremyashchiy joined a detachment of ships led by the Northern Fleet’s big anti-submarine ship Vice-Admiral Kulakov in the inter-fleet changeover in August. Later, the latter was assigned to the Russian Navy’s Mediterranean Squadron.

The diesel-electric submarines Petropavlovsk-Kamchatsky and Volkhov of the JSC Admiralty Shipyards’ modified Project 636.3 are members of the detachment (a part of the United Shipbuilding Corporation). In early August, they arrived in the Mediterranean. The Petropavlovsk-Kamchatsky submarine is the first of six Project 636.3 submarines built for the Pacific Fleet. On July 28, 2017, it was laid down, and on March 28, 2019, it was floated out and transferred to the Navy. On July 28, 2017, the Volkhov submarine was laid down, floated out on December 26, 2019, and handed over to the Navy on October 24, 2020.

Russia cancels China in the Arctic

The Russian Federation under the leadership of Vladimir Putin has been looking at ways to make use of melting ice in the Arctic and by doing so, it wants to create a trade route dominated by Russia. Now, Russia’s top admirals are apparently considering forming a new branch of the Navy to focus on the battle in the icy Arctic, where diminishing sea ice has provided merchant ships with unparalleled chances. “The subject of establishing the Russian Arctic Fleet as a new structure is being looked into,” a source told Moscow’s TASS on Thursday. It would be a separate naval unit tasked with guaranteeing the safety of the Northern Sea Route and the Arctic coast, which are currently under the control of the Northern and Pacific Fleets.

This development has literally shattered China’s dreams of building an Arctic Nuclear Base. The new detachment, according to the anonymous official, will be able to focus on the increasingly tense region, freeing up other forces to focus on their combat missions. It would be made up of ships transferred from other locations at first, but “in the future, it would be supplemented with ships and unique equipment for Arctic performance.”

Russia brings the challenge to China

Russia has now had enough of Beijing and Xi Jinping double-crossing it and chipping away Moscow’s interest zones. And now, it has started actively engaging in the Indo-Pacific region and after conducting drills in the Far East, the pacific fleet of the Russian Federation entered the Indo-Pacific region, the Fleet’s press service said on 28th September.

In Kamchatka, Russian Pacific Fleet planes carried out bombing raids and missile launches as part of a training exercise. According to the Fleet’s news department, bombing and missile strikes were carried out in the region of Khalaktyrsky beach in Avacha Bay against a fictitious opponent by Il-38 anti-submarine warfare planes and Ka-29 helicopters.

And as the entry becomes officials, this is a nightmare situation for China, as it means, Russia’s engagement in South East Asia and other parts of the Indo-Pacific will increase. This will surely be at the expense of China and make it harder for Xi Jinping to browbeat the regional players in Moscow’s presence among all other powerhouses.

Amid power blackouts and factory shutdowns, China is bracing for a massive Corona wave