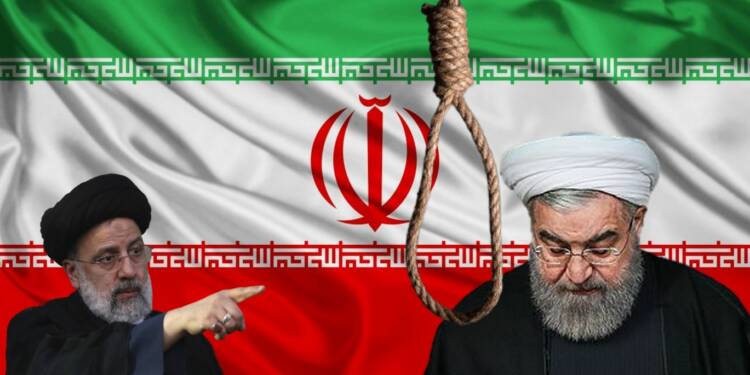 Former Iranian President Hassan Rouhani could very well be sent to the gallows soon. Iran’s parliament has effectively put its weight behind an influential committee, which has recommended to the Shi’ite nation’s judiciary that Rouhani be prosecuted for treason, Iran’s economic woes, compromising the country’s national security and several other counts which could very well rest in the former President being hanged to death. The influential committee has demanded that the former President be put on trial, and needless to say, this seems to be the handiwork of Ebrahim Raisi, since all those who have suggested that Rouhani be brought to book are Islamic hardliners.

Listing 18 counts, the petition accuses Rouhani of “deception of the public about sanctions removal” as well as “destroying Iran’s nuclear technology.” It further levels “treason” allegations, punishable by the death penalty under Iran’s strict judicial laws. According to AL-Monitor, the parliamentary committee has also implicated Rouhani in the “deaths of over 200 Iranians” in the November 2019 unrest triggered by fuel price hikes.

The AL-Monitor report also reported that enclosed with the parliamentary committee’s report was an online petition signed by over half a million “university students, young clerics and people from different walks of life.” The document urges the “revolutionary parliament” to pursue the matter until a “firm judicial verdict” is issued against the former president for “devaluing Iran’s national currency,” “destroying jobs,” and “appointing spies and dual nationals” to sensitive positions.

Former Iranian President Hassan Rouhani is a moderate leader in Iran. He has had a fallout with Supreme Leader Ayatollah Ali Khamenei and was replaced by a hardliner like Ebrahim Raisi by the Ayatollah in elections held a few months back. Raisi, also known as the “butcher of Tehran” is an unforgiving Islamist who will not blink an eye before having Hassan Rouhani executed. Rouhani is being blamed for all of Iran’s woes – from its economic crisis to the failure of the country’s nuclear programme – which has suffered setbacks mainly due to Israeli covert operations.

Ebrahim Raisi is not accountable to the people of Iran. In an election where the turnout was just 48 per cent, only Iranian hardliners voted for Ebrahim Raisi. And those who voted for him are fanatics in their own right – who are least interested in the economic revival of their country. This makes it easier for Raisi to exercise power without any accountability, as long as he enjoys the support of the Supreme Leader.

And for now, he does – which is why there is a high chance that Hassan Rouhani might just be found guilty of the crimes he is being accused of, thereby clearing the path towards his execution. Ebrahim Raisi has the distinction of being a hardline judge, who during the 1980s was one of four judges who imposed death penalties on thousands of political prisoners. So, putting Former Iranian President Hassan Rouhani to death would not really be something new for the Iranian President.

In August, for the first time in two years, Rouhani acknowledged that Israeli agents stole Iran’s nuclear secrets and gave them to Donald Trump. Trump then withdrew from the nuclear deal, officially known as the Joint Comprehensive Plan of Action. This was done just before he left office and was aimed at making life difficult for Ebrahim Raisi.

Rouhani actually used the opportunity of his last speech as a moment of vindication. He used the unrest in Iran to show that he was right all along, whereas the Conservative-Islamist regime’s influence was the one pushing Iran into anarchy. Rouhani subtly told Iranians that he has been scapegoated by the hardliners and that he is the one who held the country together for the past nine years. As a matter of fact, the hardliners in Iran have had a target on Rouhani’s back all along, which became more pronounced after the selection of Raisi as the new president in a shoddy election that saw the lowest voter turnout amid mass boycotts.

Ebrahim Raisi and Supreme Leader Khamenei are actually sending a message to all Iranians – if you are not hardliners, you are not safe in Iran. Moderates are considered as expendables in Iran these days. Moreover, Raisi is also telling the Shi’ite nation’s populace to desist from speaking against the regime, failing which, they could be incarcerated and punished in the cruellest of ways imaginable.

Given the fact that Iran’s judiciary is just as hardline as Raisi and Khamenei are, there is nothing to suggest that Former Iranian President Hassan Rouhani will be let go. Iran’s judiciary has traditionally been a conservative entity whose chief is directly appointed by Supreme Leader Ayatollah Ali Khamenei. The post is currently held by hardline cleric Gholam-Hossein Mohseni Ejei. Therefore, the Shi’ite nation’s judiciary is controlled by Khamenei’s stooge. Rouhani has indeed landed himself in a tough situation. His execution, if and when done, would mark a turning point in Iranian polity, and the country will take an even more radical turn thereafter.