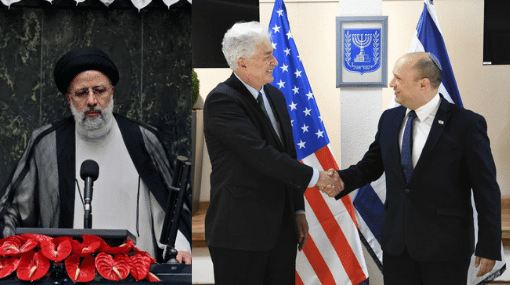 Tensions are at an all-time high in the Middle East. With Ebrahim Raisi now firmly in office as the Shi’ite nation’s president, hostilities are rising in the region at an unprecedented pace. Iran has stepped up activity across the Middle East. Its militias are enthusiastic about the change of guard in Tehran, while Israel and the Arab world led by Saudi Arabia are equally concerned. Israel faces an immediate existential threat from Iran, especially now that an ultraconservative like Ebrahim Raisi has risen to power. So, Israel is canvassing global support against Iran and its rabid president, beginning with the United States. Israel’s intelligence inputs have historically always proven to be on point, and the CIA chief would be a fool to not pay heed to them.

Take the case of Israel stealing Iran’s nuclear secrets and supplying them lock, stock and barrel to then US President Donald Trump. Subsequently, being the tough man that he was, Trump walked out of the Iran nuclear deal, thereby rendering it null and void. Iran lied through its teeth and claimed that its secrets were never stolen, because there were none. However, recently, former Iranian President Hassan Rouhani admitted that Israel indeed stole Iran’s nuclear secrets and supplied them to Trump, based on which the United States walked out of the JCPOA.

Joe Biden, on the other hand, after becoming President thought he could push for the nuclear deal and that the world would never know about how Israel supplied critical intel to the US back in the days of Trump which led the man to walk out of the deal. However, Hassan Rouhani’s candid admission in the affirmative jeopardised such plans of Biden, and emboldened Israel to supply another tranche of crucial intel to the US – publicly so.

Israel hosted US CIA Chief William Burns and discussed Iran on Tuesday. Walla news reported that Burns had met with Israeli Prime Minister Naftali Bennett, head of Mossad Spy Agency David Barnea and other senior intelligence figures. According to Channel12, the Mossad chief presented Burns with information showing that Raisi is untrustworthy and incapable of negotiating a new nuclear deal or sticking to his commitments. The dossier, given to the CIA director, also portrayed Ebrahim Raisi as an exceptionally extreme, cruel, corrupt and unstable man who has definitive “mental disturbances”.

The visit by Burns comes amid what analysts have called a “shadow war” that has seen a spate of attacks on facilities in Iran and maritime vessels linked to Israel. As the CIA chief was visiting Israel, the Jewish nation’s new government, currently led by Prime Minister Naftali Bennet gave the go-ahead for settlement construction in the West Bank, apart from also authorising construction in Palestinian areas. Next week, Israel is expected to formally authorise the construction of some 1,000 homes for Palestinians. At the same time, Israel plans to authorize the construction of 2,000 new settlement homes.

This is a message to the US government, led by Joe Biden and Democrats, that while Israel is willing to go soft on Palestinians, it will also push forward with its own settlement plan in the West Bank, apart from continuing its campaign against the Shi’ite nation of Iran. The Biden administration knows that the information supplied by Israel is not disrespectful towards Raisi, but is, in fact, the reality.

Read more: The Middle East is gearing up for the most decisive war between Israel and Iran

If the CIA chief is sane enough, he would accept the findings of Mossad, go back to his country, and ensure that the US cuts all remaining ties with Iran, puts an end to nuclear deal revival talks and handles Tehran in a manner which it best understands.

If not, Israel will happily deal with the Iranian menace all by its own. This is perhaps the last chance which Tel Aviv has given to Washington to course-correct, failing which, nothing will remain an impossibility in the Middle East – a region central to the United States’ interests. Israel’s stand on Iran is abundantly clear. The Jewish nation is in no mood to even appear conciliatory towards Iran. Iran is proving to be a threat for Israel which must be immediately neutralised, using military means if necessary. This renewed vigour on the party of Israel to deal with the Iranian threat all on its own if required is bound to raise temperatures in the Middle East, which could very well spiral into a full-blown conflict.

The nuclear deal revival talks which were being held in Vienna between the West and Iran are currently stalled. The Ebrahim Raisi government is in no mood to resuscitate the Joint Comprehensive Plan of Action (JCPOA). Instead, by stalling the negotiations rather indefinitely, Tehran is narrowing its breakout time – which means that the Shi’ite nation is getting closer to a dirty bomb with every passing day. Israel knows this very well, and soon, there might be a point where Iran might just surprise the world.

The Iranian threat has remarkably risen after Ebrahim Raisi assumed the presidency. The man, better known as the “butcher of Tehran” is leading Iranian foreign policy towards added hostility. Raisi, who oversaw the executions of as many as 30,000 dissidents in 1988 and has been sanctioned by the U.S., for human rights violations, has been a major critic of engagement with the West and the JCPOA.

The CIA chief must convey to his country’s political leadership the urgency with which the Iran threat needs to be dealt with. This is not the time for dillydallying. This is the time for decisive action, and Washington will be well advised to take the cue from Israel and teach Iran a lesson it so desperately requires.