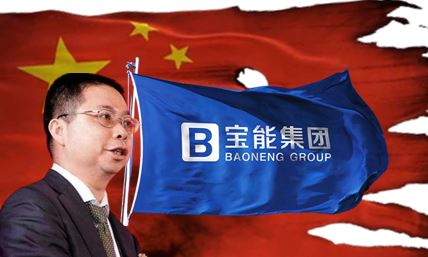 Even before the dust could settle over the Evergrande crisis, another Chinese conglomerate, Baoneng Investment Group, has fallen prey to the burgeoning debt crisis in China. Overshadowed by the collapse of the Evergrande, Baoneng’s fall is no lesser clamoring.

Read More: The politics behind the fall of Evergrande and why Jinping won’t save it

Baoneng Investment Group is a Shenzhen-based private property and financial services company founded by the Yao brothers in 1992. The elder brother, Yao Zhenhua always aspired of taking over the country’s financial and capital markets; while his younger brother, Yao Jianhui insisted on maintaining a low profile status.

Initially, the will of the elder brother prevailed when Baoneng made its way into the financial market via life insurance and wealth management business. In 2015, Zhenhua caught the regulators’ attention when Baoneng launched a highly leveraged hostile takeover attempt against Vanke, then China’s largest real estate giant.

Baoneng managed to become the biggest shareholder of Vanke with the credit support worth 45 billion Yuan; however, it was forced to relinquish its holdings after regulatory intervention. Later on, Yao was banned from the insurance industry for ten years owing to the massive violations.

The brotherly business partnership started to fall apart with the two brothers splitting on how to run the company. The younger brother Yao Jianhui took over the property business, while the elder brother started managing other businesses. Later on, Zhenhua shifted his attention towards the auto and phone manufacturing sector. He believed that the company needed to expand in these sectors because Baoneng’s fortunes in the real estate sector had taken a massive hit.

So, in 2017, Zhenhua founded Baoneng Motors and went on a spree of acquiring major stakes in local automakers. The same year, Baoneng took over majority stakes in a small Shanghai-based automaker named Qoros Auto. Later in 2019, Baoneng took over French automaker PSA’s joint venture with Changan Automobile. As per a Nikkei Asia report, Yao Zhenhua vowed to invest 10 billion yuan annually in the five years starting in 2018 to develop new vehicles and launch 26 models by 2022.

Despite investing around a whopping 50 billion Yuan in the auto industry, Baoneng motors never really took off. It invested heavily in industrial parks and in acquiring lands, but all remain non-operative as of now, with the sights of overgrown weeds and a few construction workers.

Zhenhua’s gamble in the unfamiliar sectors

But Zhenhua has an impeccable trait of overlooking the alarming signs. He kept marching ahead in the phone manufacturing sector and even tried his luck in the industrial real estate sector, despite all setbacks faced by Baoneng motors. Baoneng invested 1 billion Yuan in its mobile manufacturing unit while poaching top talent from Huawei and even Samsung.

While Yao Zhenhua kept treading ahead on the perilous path of building a vast empire of his own, his younger brother Yao Jianhui declared this year that he won’t be a part of the group anymore. He didn’t join any of the new companies that Zhenhua founded under the umbrella of Baoneng; instead, he exited from 30 subsidiaries that he was already a part of. Risking the debt crisis, even Zhenhua exited from tens of companies.

The blistering relinquishment of stakes at Yao brothers’ part left the creditors astonished and worried over the fact that the company might be in big trouble. In February, China Zheshang Bank dispatched officials to Baoneng’s Shenzhen headquarters asking the company to either repay billions of yuan of outstanding loans tendered back in 2015 during the failed Vanke takeover attempt or put up more collateral against the same.

Some fear even the collaterals could be overvalued, stoking concerns that creditors won’t be able to cover the principal amount and interests on the debt even after disposing of all of the collateral.

Baoneng is also facing a massive cash crunch of late. For instance, Shenzhen Jushenghua is facing a short-term interest-bearing debt of 87.3 billion yuan, but the cash on its books is less than 4.6 billion yuan. Baoneng had more than 150,000 employees across all its businesses during the peak but is today struggling to pay even salaries of those still working for the companies.

Local government staves off the misery

The company has been facing massive protests along with the wrath of the pandemic and the CCP’s “common prosperity campaign.” Resultantly, the fate of the company’s creditors, which includes even some provincial governments, hangs in balance. Thanks to Zhenhua’s close ties to the Guangzhou Development District, the local government has agreed to provide 12 billion Yuan of strategic investments to Baoneng.

Baoneng has been struggling to stave off its financial woes by selling its assets. “All its land and office buildings have been used for collateral on its loans, and the interest rates are not low,” one person familiar with the matter was quoted as saying by Nikkei Asia. The only liquid assets are Baoneng’s holdings of listed companies’ shares.

Forget about materializing Zhenhua’s ambitious dreams of ruling over China’s financial and capital markets, Baoneng’s current goal is to keep itself afloat and functioning. The company is offloading a large number of its shares in the secondary market to keep its wheels turning, but given the burgeoning debt crisis that the company is facing, it would soon be facing the fate of the Evergrande in no time.