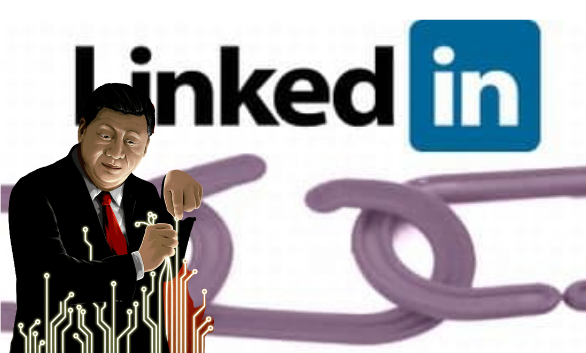 China has forced Microsoft-owned career networking website LinkedIn to exit China. With this, the last hope of opening up the Chinese society too has died. Microsoft’s LinkedIn was the lone major American social network allowed to operate in China. The Microsoft-owned service for professionals censors the posts made by its millions of Chinese users.

LinkedIn was facing increasing pressure from Chinese authorities to take down profiles of China critics who were using the social networking features of the website to voice their opinions against the CCP. This is why the CCP perceived LinkedIn as a threat. The pressure being piled by the Communist Party seems to have become unbearable for the career networking website.

LinkedIn senior vice-president Mohak Shroff blogged, “We’re facing a significantly more challenging operating environment and greater compliance requirements in China.” The career networking website has stated, “While we are going to sunset the localised version of LinkedIn in China later this year, we will continue to have a strong presence in China to drive our new strategy and are excited to launch the new InJobs app later this year.”

Shroff explained, “While we’ve found success in helping Chinese members find jobs and economic opportunity, we have not found that same level of success in the more social aspects of sharing and staying informed.” These are the reasons that forced LinkedIn to close its operations in China and plan a new venture called InJobs. The new venture will not have a social networking feature rather it will be a pure job search platform without any ability to share articles, ideas, and opinions.

Why was China afraid of LinkedIn:

While all Western social media websites had been shunned by China, LinkedIn decided to stay there in 2014 and made up its mind to follow the Chinese internet regulations.

On its part, the CCP would have thought that there was no harm in letting LinkedIn operate within the Communist nation. After all, LinkedIn wasn’t a political discussions forum like Twitter or a pure social media portal like Facebook. Initially, the CCP didn’t perceive LinkedIn as a major threat and assumed it to be a mere job search website.

China however seems to have been taken aback after it realised that idea-sharing features of LinkedIn could be used to instigate discussions about CCP’s crimes. The primary purpose of LinkedIn may be to ensure career networking but for an Uyghur Muslim in Xinjiang, a Buddhist monk in Tibet or a pro-democracy activist in Hong Kong, LinkedIn could easily become the only source of venting their frustrations against the CCP in mainland China.

Effectively, China felt that Microsoft-owned service could fill in the vacuum of Western-styled open discussion forums in China.

How the China-LinkedIn rivalry unfolded:

While deciding to set up operations in China, LinkedIn had specifically agreed to follow the Chinese censorship regulations which involve filtering out the politically sensitive material, either by deleting posts, curtailing searches or by taking down user-profiles themselves.

Since LinkedIn was ready to follow such controversial guidelines, China itself had no problems with the career networking website. However, things went South after Microsoft exhibited a keen interest in purchasing TikTok and taking up the US operations of the Chinese video-blogging app. A vindictive China even tried to take revenge with an attempt to use Microsoft-owned service to recruit Chinese spies in the UK.

Ultimately, China’s internet regulator rebuked LinkedIn executives this month for failing to control political content, according to the New York Times report. The regulator said it had found objectionable posts circulating in the period around an annual meeting of China’s lawmakers.

As a punishment, Chinese officials also asked LinkedIn to perform a self-evaluation and offer a report to the Cyberspace Administration of China, the country’s internet regulator and the service were also forced to suspend new sign-ups of users inside China for 30 days.

Last month, LinkedIn also banned profiles of several American journalists from its China-based platform. Similarly, in June, it was reported Chinese authorities had asked LinkedIn to take down 42 profiles, out of which 38 were taken down.

An indictive and paranoid China was forcing Microsoft-owned service to censor everything under the sun. It was becoming impossible for the career networking platform to operate in China, as the CCP deliberately forced it to quit the Communist country.