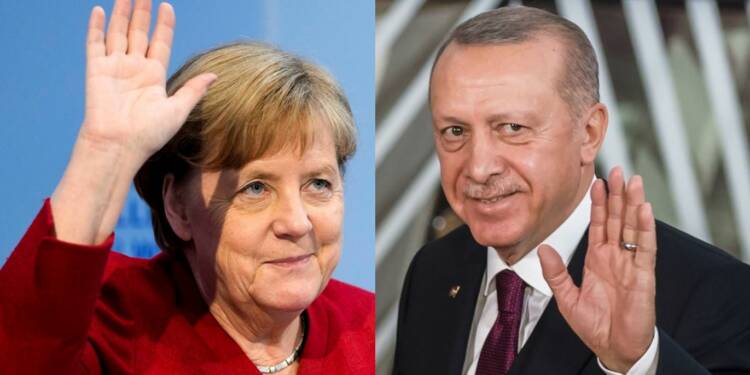 The economic catastrophe that is underway in Turkey is hidden to no one, and at a time when the European Union can push Ankara to fall in line, Angela Merkel has instead provided relief to Erdogan. According to Anadolu News Agency, the head of the German Turkish Chamber of Industry and Commerce stated that a German pharmaceutical giant plans to invest in Turkey and form a joint venture with a famous Turkish pharmaceutical company.

According to the report, Markus Slevogt revealed that Boehringer Ingelheim, a German pharmaceutical company, aims to invest in Turkey and form a joint venture with Abdi Brahim, a famous Turkish pharmaceutical player. This development is coinciding with the visit of German Chancellor Angela Merkel before her retirement, making it her last visit as the head of state.

This is like providing a lifeline to Turkey’s dwindling economy, which is desperate for any foreign investment. This is entirely contrary to the strategy that the majority of the EU members would have preferred. Anyone with the slightest knowledge of the EU politics knows that Merkel has time and again shielded Erdogan and Turkey.

According to Anadolu Agency, German Chancellor Angela Merkel arrived at the Huber Mansion in Istanbul on Saturday to meet with Turkish President Recep Tayyip Erdogan. Merkel and Erdogan rode in a golf cart around the mansion’s beach area. The two leaders greeted local and foreign journalists in the area while standing next to the Turkish and German flags.

Erdogan expressed his wish for a strong working relationship with the future German government during a joint press conference held after the presidents’ meetings. Merkel, Erdogan claimed, has always taken a “reasonable and solution-oriented attitude.” The Turkish president expressed his desire for the two countries’ collaboration to continue. “Any new government and its chancellor would have my best wishes,” Erdogan stated.

Agenda of the meeting

Merkel is a co-author of the European Union’s refugee deal with Turkey, which provides financial assistance to the Turkish government in exchange for a reduction in the number of asylum seekers and refugees crossing the Aegean Sea into EU territory. Merkel also urged Erdogan to work with her in dealing with the Taliban in Afghanistan to avoid a new migration catastrophe.

In recent years, the topic of refugees and migrants has dominated discussions between the two countries, with millions of people passing via Turkey on their journey west to seek asylum in the EU. Turkey has stated repeatedly that it wants European governments to do more to stop the migrant flow. It was Merkel who pushed through a deal between the EU and Turkey in 2016 that promised 6 billion euros (about $7 billion) in exchange for Turkey accommodating the influx of refugees and migrants, instead of working with other EU countries to reprimand Turkey.

Historically, Germany supported the Ottoman empire. With Erdogan aiming to revive the said empire, Berlin seems to be enthusiastic about getting into bed with Turkey, now more than ever. It would not be surprising for Turkey to be at the centre of a third World War. Germany, needless to say, seems more than eager to support Ankara. During World War I, when the state of Prussia was still around, German Emperor Wilhelm II (Kaiser) sided with the Ottoman Empire and was among the first leaders to have initiated a chain of declarations of war in July 1914 which ultimately led to the First World War.

Given this background, there is no doubt that the deal coinciding with the visit of Angela Merkel is no matter of sheer luck, but a parting gift from Chancellor Merkel to her friend Erdogan, at a time when he is cornered. While it may seem pointless, but the pointless gift does possess a danger, and that is giving Erdogan enough legroom to restart his dangerous policy of destabilising the region. By doing this, Chancellor Merkel, before leaving office is stamping her image as the enabler of the coming dark times in the Middle East and North Africa (MENA) region.