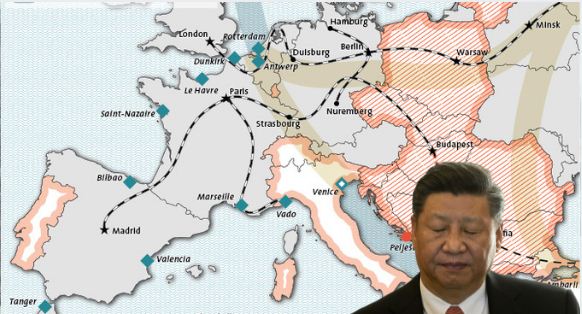 Chinese President Xi Jinping had announced his ambition to dominate the global infrastructure map with his Belt and Road Initiative (BRI) that was launched in 2013. Initially, the BRI made massive inroads in Europe, Africa, Central Asia and South Asia. But now, the BRI is being rejected by one region after another.

Due to growing concern over usury and exclusion of locals, the BRI hit a roadblock in Central Asia recently. Ultimately, China had to cut its role in BRI projects in Central Asia to make it acceptable for the region. And now, Europe is rejecting the BRI. Chinese investments in Greece’s Piraeus Port are now facing a major backlash in the European country and this could as well trigger the end of Chinese BRI projects in the Continent.

Why the Piraeus port is important

Well, it is the fourth-largest container port in Europe and China wants to position it as the point of Chinese trade into the Mediterranean and the rest of Europe.

Chinese shipping firm Cosco, a Chinese State-controlled shipping group, took a majority stake in Greece’s Piraeus port that serves as a link between Asia and Europe in 2016. The Chinese State media celebrates the Piraeus port in Greece as “an example of a BRI success story.” China, therefore, values its BRI investments in Greece.

Recently, Cosco also purchased a further 16 per cent stake in the Piraeus Port Authority in a bid to consolidate its control over the Greek port.

For China, the port is critical to its Belt and Road Initiative, which seeks to build infrastructure linking Asia, Africa and Europe. More than a dozen EU member states have signed up to the BRI, with China looking to make the Greek port a regional distribution centre and stimulate trading activity between Beijing and Europe. During a visit in November 2019, Chinese President Xi Jinping said, “I have seen in the port today that the [BRI] is not a slogan or tale, but a successful practice and brilliant reality.”

The latest deal between the Piraeus Port Authority and Cosco has left the EU worried over increasing Chinese control in European infrastructure. There is growing frustration over social and environmental issues linked to Chinese projects, which is hurting the public opinion regarding BRI.

Vassilis Kanakakis, President of the Greek Shipbuilding and Ship-repair contractors’ Union, said, “I want the Chinese, but I want them to invest in the right way.” Vassilis added, “Stay in Greece but work with us.”

In fact, even purchasing the extra stake in the Piraeus Port Authority wasn’t a cakewalk for Beijing. Diplomatic tensions and pushback by the Greek bureaucracy as well as local groups kept delaying the transfer of additional shares to Cosco.

On its part, Cosco was required by the preliminary agreement in 2016 to complete 11 investment projects worth about €300 million by 2021 as a precondition for receiving the extra shares. The investment projects included expansion in port capacity to receive more cruise ships and improving its shipbuilding infrastructure. However, most of such investment plans remain incomplete.

Meanwhile, China blames local opposition in Greece and the Greek bureaucracy for the delays.

And it is, in fact, true that Piraeus residents aren’t happy with Chinese investments. They have launched a series of lawsuits, alleging Cosco of having failed to follow environmental protocols and damaging the marine environment. Anthi Giannoulou, a lawyer and one of the citizens involved in the lawsuits, has been quoted by FT as saying, “I was born and raised in Piraeus, and this investment is going to destroy my city.”

Meanwhile, the EU is making an example out of the Piraeus project to suggest that Chinese investments can be risky. Raphaël Glucksmann, a member of the European Parliament who chairs a committee to assess foreign interference in the EU’s democratic processes, said, “This deal with Cosco is concerning. Not only do we now have a much clearer view of the risks that such Chinese investments in strategic infrastructure entail for the EU, but we also know that Cosco is not living up to its contractual obligations.”

Relations between Greece and China are not at their best with a conservative government coming to power in Greece a couple of years ago.

Greece is now treating cautiously between the US and China, instead of falling prey to Beijing’s usury.

The US itself has managed to exclude China from Greek projects like the development of 5G networks and investments in ports in the north of Greece.

Greece too has eased out Chinese State-owned enterprises from public tenders in a bid to maintain a safe distance from Beijing. Meanwhile, Greece has refused to host a summit in 2022 for the “17+1” grouping of China and Central and Eastern European countries.

Meanwhile, Cosco has been given a period of five more years to complete all expected projects. This may not be an easy task given frosty diplomatic relations between Athens and Beijing, and local opposition to Chinese investments. In any case, Greece will reclaim the shares if Cosco cannot complete expected projects by the end of five years.

Any disruption to Chinese BRI investments in Piraeus port is bound to have unintended consequences for Beijing. The entire region will grow sceptical about the investments and further the connecting link between China and Europe via Greece would be in danger of getting severed.