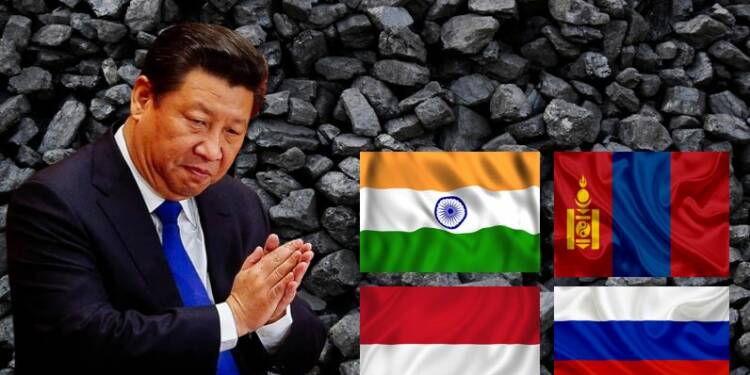 China is a textbook bully that uses everything in its control to hurt others. It uses control over key inputs to hurt its trade partners. It even used a Pandemic to hurt its rivals only last year. However, the bully that used to capitalise upon other countries’ woes is now set to get bullied itself as other countries capitalise on China’s coal crisis. Coal producing countries are now turning China’s coal crisis into an opportunity.

China stopped importing coal from Australia in November 2020. The unofficial ban on Australian coal imports continued in China for around one year. The ban resulted in a severe China’s coal crisis that has caused power outages, blackouts and factory shutdowns all over the country. Coal has suddenly become a hot commodity and four countries – Russia, Indonesia, India and Mongolia, are making big profits out of China’s miseries.

Cargoes of coking, thermal and brown coal have crossed 21 million tonnes in September, which is roughly around a 23.5 percent jump from the 17 million tonnes of coal exported to China in August.

Within India, Coal India, a government-owned coal mining and refining corporation, has come into prominence. While China’s coal crisis triggered a global surge in energy prices, doubts were being raised by global media about India’s ability to manage any scarcity in domestic coal supplies.

However, India has managed to avoid any coal crisis or power outages. Coal India shares meanwhile have become one of the top money-making shares in the Indian stock markets. The stock has been performing well, and is also showing a pattern of consistent and healthy growth.

Russia and Mongolia selling record quantities of coal to China

Meanwhile, Russia and Mongolia are also making merry at China’s expense. Russia, in particular, is getting the best of both worlds – Europe, which sources almost half of its all natural gas supplies from Russia, is asking Moscow for more coal. At the same time, China too wants more coal. So, Russia is also turning China’s coal crisis into an opportunity just like Indonesia.

Also read: Putin is playing a game of Coal and Stick with Jinping and it’s extremely amusing

In January-August 2021, Russian coal exports to China went up by a whopping 43%. In fact, Russia’s coal export capacity has got maxed out. Natasha Tyrina, a principal research analyst at Wood Mackenzie Ltd. in Houston said, “If all the European utilities switch to coal, it will result in a huge spike in coal demand that Russia alone cannot provide for on such a short notice.”.

Also read: Just as China prepared to extract coal from its own mines, heavy rainfalls sealed them shut

China’s coal crisis is being turned into an opportunity by many countries who are making big gains out of China’s coal miseries. This is only appropriate given how China has been fuelling its own growth for past several years by weaponising its trade relations and critical supply chains with other nations.