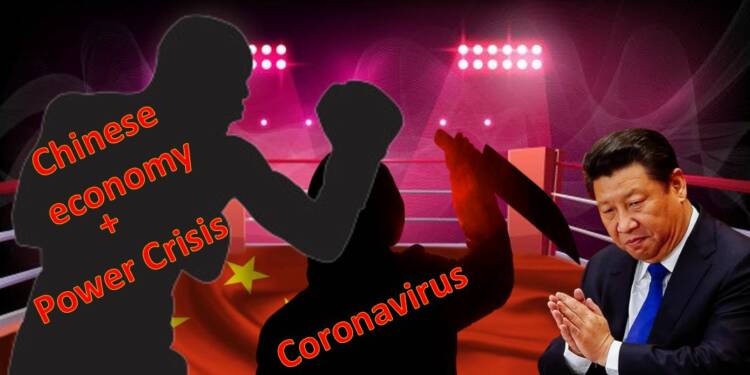 Amid crippling energy and economic crisis, China is staring at a massive pandemic surge in front of its eyes. Weighing down on the pandemic is extremely crucial for China for two reasons: For steering its economy back on track, and for keeping its ambitions of organising the Winter Olympics afloat. China has so far adopted its “Covid-Zero strategy” to rein in the pandemic; however, it has started to backfire now.

The world has learnt to live with the Coronavirus, except for China, which continues to implement its “zero-tolerance” strategy. The cities are sealed shut, communities are asked to lock themselves up in their homes, and economic activities in the region are vehemently discouraged even if a single case is registered. However, the outbreaks are now emerging more frequently, raising doubts over the viability of China’s Covid strategy.

An Indian Express report quotes a Chinese official as saying that “the burst of infections had already reached 11 provinces and regions, and warned that it could spread further.” “Most of those infected have been involved in inter-regional tourism activities, and the risk of further spread is still growing,” Mi Feng, a spokesperson for the National Health Commission, said. “Areas that experience outbreaks must rapidly enter a state of emergency.”

A large part of the capital city of Beijing also remains under lockdown, prompting organisers of the “Beijing Marathon” to postpone the programme. The event managers said that the run would be postponed until further notice “to prevent the risk of the epidemic spreading (and) effectively protect the health and safety of the majority of runners, staff and residents.” Similarly, the “Wuhan Marathon” also got restricted without prior notice.

Read More: After Coronavirus pandemic, all of China’s diplomatic outreaches have been a massive failure

This has spurred a great deal of uncertainty among the Chinese masses. They hardly get to know when their cities will be sealed shut and when  the normalcy will usher in again. And that comes with a gigantic economic cost for the already-sinking Chinese economy.

With Covid-19 outbreaks scattered throughout 11 provinces, travel and economic restrictions have weighed down China’s economic growth. Not only the consumer spending is plummeting, but Chinese industries are also producing far less than usual, owing to the low demand and immense energy crisis. With Chinese factories gasping for power and the pandemic burning a hole in the consumers’ pockets, the economic activities in China are currently faring in red.

The Chinese GDP growth is expected to stay lukewarm in the ongoing quarter and even next year. There are structural problems in the Chinese economy:

Xi’s footprints are visible in every structural problem, and they are affecting China. To start with, Xi was extremely short-sighted when he imposed unofficial bans on Australian coal in October 2020. Chinese thermal power plants were accustomed to working with Australian coal that has a high calorific value. Soon, Chinese towns started facing blackouts and Chinese factories had to scale down production due to power outages. By the time Xi decided to restart importing Australian coal, it was simply too late.

Chinese markets are facing a severe coal crisis today and Beijing is compelled to import coal of lower quality from countries like Russia and Mongolia, apart from importing more coal from Indonesia. Shrinking industrial production in China has been characterized by a drop in the manufacturing Purchasing Manager’s Index (PMI) to 49.6 in September from 50.1 a month earlier. Xi simply cannot digest the fact that the decline in Chinese exports is directly attributable to an energy crisis created by his own policy failures.

Not only that, China is also reeling under an immense diesel crisis, further worsening the energy crisis in the country. In May, Beijing imposed heavy taxes on imports of light cycle oil (LCO), a blending component for diesel, in a bid to reduce fuel oversupply. At that time, Xi didn’t consider that there will be a likely shortage of oil supply in the future, which could lead to a tight supply of the critical energy resource to China. Lack of foresight and not stocking up enough supplies are reinforcing the diesel crisis in China.

China’s miseries that even threaten the country’s status as the global economic powerhouse, stem from its President Xi Jinping’s miscalculated economic policies. The Chinese economy now stares at a crisis that may undo the economic developments garnered over the past two decades.