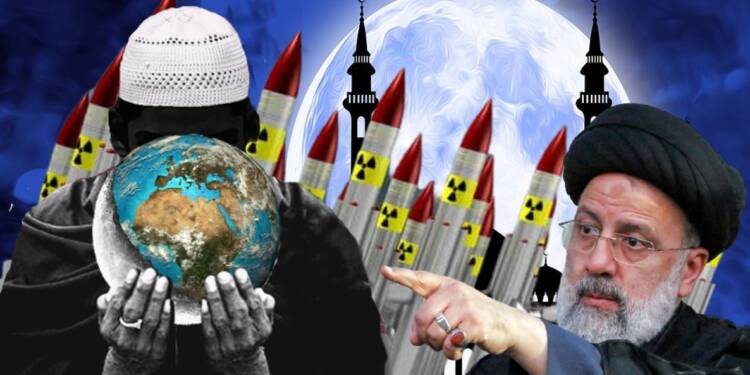 The world was left stunned last week when China threatened humanity, with a brazen demonstration of its hypersonic missile program. A mere week later, China’s foul-weather friend Iran has now brought another surprise to the world – an offer to nuclearise the entire Islamic world. Yes, you read it right!

Iran puts its nuclear tech up for sale:

Iran has called on the entire Muslim Ummah to be the benefactor of Iran’s nuclear technology “for the welfare of the people and Islamic societies, so that it can pave the way for a new Islamic civilization.” The spokesman for the Atomic Energy Organization of Iran, Behrouz Kamalvandi, announced this bombshell offer on Saturday, expressing Iran’s willingness to share its nuclear technology with Islamic nations for “civilian purposes.”.

Kamalvandi further said that “We have made every effort here to reach the pinnacles of nuclear science and technology, and in spite of all the opposition and hostility in the international arena, in the nuclear industry, we have achieved great achievements. We have invested everything in the path of achieving these great achievements and we have dedicated our scientists, each of whom was a great man and scholar, to the promotion of Islam and the Islamic Ummah.”

Simply put, Iran has now put its nuclear technology up for sale, to shore up its plummeting economy and ratchet up its cachet in the Islamic world. This also means Iran has now advanced its nuclear program up to a level from where it can easily help other countries go nuclear as well.

Read More: The Biden administration is stripping Arab nations of missile defence systems as a bargain for the Iran nuclear deal

Iran’s nuclear program traces its roots back to the 1950s era of bonhomie with the US:

It all started in the 1950s when Iran used to be an American ally. Washington’s auspices were instrumental in the launch of Iran’s nuclear program. But, western cooperation ceased to exist following the Iranian revolution, and it was in the early 2000s when the US accused Iran of seeking nuclear technology for “non-peaceful purposes”, for the very first time. Later on, Russia helped Iran by sending its nuclear experts to Tehran and played a key role in building Iran’s first nuclear power plant, the Bushehr I reactor.

In 2016, Iran’s entry in the Joint Comprehensive Plan of Action (or the JCPOA) deal ostensibly reined in the Iranian nuclear program, but Israel had always looked askance upon the deal, claiming that Tehran was pursuing its clandestine nuclear program even after getting all the sanctions removed at the behest of the Obama administration. Trump’s withdrawal from the JCPOA deal and ensuing crippling sanctions indeed weighed down Iran’s nuclear program. However, Biden’s presidency helped it steer back on track with loosened sanctions and lesser restrictions.

And today, not only Iran has armed itself with devastating nuclear technology, but it is also threatening with arming the entire Islamic world with the same, purely for political reasons.

Iran is desperately looking for political support in the Islamic world. The signing of the Abraham Accords and the ensuing bonhomie between Israel and the Arabs have severely hampered Iran’s regional ambitions. Iran is now banking upon its advancements in the nuclear arena, to seek support from the nations disgruntled with the new political order in the Middle East. For instance, the nations like Turkey and Qatar have always shared bitter ties with Arabs and Israel, now Iran would like to cash in on those differences to challenge Saudi Arabia’s undisputed leadership of the Islamic Ummah.

Iran’s political ambitions are quite similar to Turkey’s Ottoman-styled adventurism in the region. The only difference is that Iran is offering its would-be allies the sought-after nuclear technology, in return for their allegiance towards Tehran.

Iran’s nuclear program is a crisis in the making, viewed as an existential threat by Jerusalem and Riyadh. Israel has already allocated a $1.5 billion budget for carrying out an operation against Iran’s nuclear apparatus, whereas Riyadh is also believed to be ramping up its defenses. A Times of Israel report also reveals that the Israeli Defense Forces will soon begin practicing for a strike on Iran’s nuclear assets. In the beginning of this year, IDF Chief of Staff Aviv Kohavi had announced that he has instructed the military to begin drawing up fresh attack plans against Tehran. So, if Iran starts arming Israel’s more rivals with deadly nuclear technology, Israel will highly likely launch an all-out war against Iran without having a second thought.

A bad news for Pakistan and the Taliban:

On the other hand, a nuclear-armed Tehran would also set alarm bells ringing in Pakistan and the Taliban, who share ambivalent ties with Iran’s Shi’ite rulers. Pakistan shares a border dispute with Iran. Also, Tehran has accused Pakistani-based terrorists of carrying out terrorism-related activities on Iranian soil, on several occasions. Similarly, Iran is believed to have readied its Fatemiyoun Brigade to take on the Taliban menace at its border with Afghanistan. And, even the Taliban would find it perilous to overlook Tehran’s reservations over Afghanistan’s treatment of its Shia minorities.

So, when the world thought that nothing could be worse than Iran getting hold of the nuclear weapons, Tehran managed to astonish the world with another jaw-dropping announcement of arming the entire Islamic Ummah with nuclear technology. This will also kickstart a notorious race for nuclear arms in the Middle East, carrying the potential of driving the entire region towards an era of unending wars and constant turmoil.

Remember! This all started back in the 1950s when Iran used to be an American ally.