China is headed for its own lost decade, but this time it will be worse than Japan’s 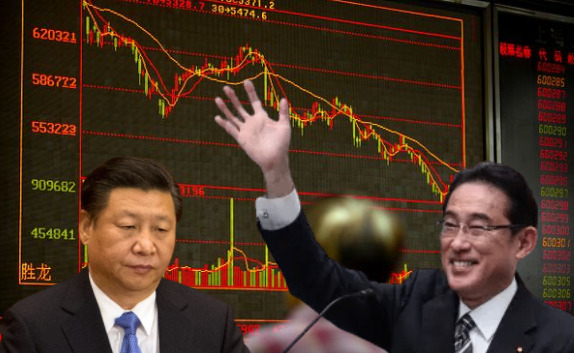 There was a time when Japan was expected to overtake the United States of America in terms of economic size. However, the Japanese economy moved into stagnation in the late 1980s and throughout the 1990s. Today, Japan is the third-largest economy in the world. Japan’s economic stagnation throughout the 1990s has now come to be described as the “lost decade”.

A few years ago even the Chinese economy was tipped to overtake the United States economy. And now, China is staring into a lost decade of its own. However, you can expect China’s lost decade to be far worse than Japan’s. At the end of the day, Japan was an advanced economy whereas, China is a middle-income country with widespread poverty and a developing economy. If China faces a “lost decade”, then it would certainly mean total obliteration.

Japan’s postwar economic growth was sensational. Japan ended up on the losing side at the end of the Second World War and, policymakers had to build its economy from the scratch.

Japan’s postwar miracle was powered by a free market economy and open trading with the West. Also, cultural changes in the postwar like easier migration of labour from farm activity to non-agricultural activity that offered higher productivity and per capita income powered Japan’s dramatic economic acceleration.

Between 1945 and 1956, Japan’s economy grew very quickly at the rate of 7.1%. The recovery phase was followed by rapid growth. By 1991, Japan’s economy was already 120% that of Britain and 85% that of the US. The rapid economic growth made Japan an electronics and automobile powerhouse. Brands like Suzuki, Toyota, Sony and Panasonic continue to dominate the world markets even today.

However, several decades of economic growth and boom cycle often creates a fragile bubble. This was also true in Japan’s case. Years of spectacular economic growth led to heavy speculation activity in the Japanese economy which artificially fuelled the stock market and real estate market in Japan and sent prices soaring throughout the 1980s. At one time, inflated asset prices led to a three square meter area near the Imperial Palace getting sold at $600,000.

Japan soon understood that it won’t be able to sustain growth levels matching up to the speculation activity in its markets. So, the Bank of Japan hiked interest rates to cool the bubble and derive speculative growth.

However, the higher interest rates led to tight liquidity and a credit crunch. The stock market crash and debt crisis meant that many borrowers failed to repay debts backed by speculative assets. This led to a banking sector crisis, which forced Tokyo to announce several bailouts.

Japan’s problems were further complicated by two factors-Stagnation in the working-age population, and Political instability started in the 1990s.

The 1990s are therefore characterised as a lost decade for Japan and the effects of the lost decade are still visible even though leaders like former Japanese Prime Minister Shinzo Abe have tried too hard to reinvigorate the Japanese economy.

Just like speculative activity had sent asset prices soaring in Japan throughout the 1980s, China too enjoyed an artificial housing boom in recent decades backed by heavy speculation. The real estate sector in China has witnessed artificial growth with prices per square meter quadrupling. China constructed hundreds of millions of dwellings to make it a home-owning country.

Local Chinese authorities deliberately encouraged the construction of entire ghost towns to pump growth numbers. Also, China relaxed minimum down payments for investment in properties from 2014 to 2016. This led to a surge in mortgage borrowing and much of this speculative growth in the Chinese real estate has been financed by Chinese banks and financial institutions and now China is staring into a deep real estate sector and debt crisis.

Again, China isn’t able to understand how it can cool its real estate bubble. Japan had raised interest rates which led to tight liquidity and a painful credit crunch. Similarly, China enforced “three red lines” last year to limit the borrowing limits of property developers like Evergrande. This has led to tight liquidity and a serious credit crunch in the Chinese property market, which is creating problems for real estate developers in the Communist nation.

Today, Evergrande, a heavily indebted Chinese real estate giant, is on the brink of default. This month, Fantasia Holdings, Sinic Holdings, and China Properties have all defaulted on offshore notes, while China Evergrande Group narrowly avoided defaulting last week by making a coupon payment on time.

Moreover, speculative investors in China are taking the economy just like bullish activity had slowed down Japanese growth. In the late 1980s, bullish Japanese investors had anticipated continued economic growth of 8 per cent a year, even though such growth levels were unattainable. However, higher share prices had pumped up the Chinese markets artificially which ultimately led to a disaster.

Similarly, Chinese stock markets have crashed due to an energy crisis and President Xi Jinping’s regulatory crackdowns against the private sector. Therefore, several local and overseas investors are exiting the Chinese markets. Yet, some bulls think that China has hit the rock bottom and that markets will go up once again.

However, Bloomberg quoted Peter Garnry, head of equity and quantitative strategy at Saxo Bank, as saying that it’s “too early to return to China.” Garnry explained, “It is not cheap given the risks in the housing market, debt markets, and changing supply chains. China’s zero covid policy will also continue to create roadblocks for the economy. Plus China’s “common prosperity” will create more distribution, equality, and a less-positive climate for publicly listed companies.”

Several bullish investors are ready to get their fingers burnt by still investing in a dead economy like China. This is going trigger a bigger downfall in the Communist nation, which will ultimately make the Chinese economy untouchable.

Also, the property sector in China cannot grow any further because it has already built almost as many houses as it needs. Policies like property taxes in megacities are only likely to force Chinese people to abandon big cities and move to towns that do not charge a property tax, which will turn more and more urban areas in China into ghost towns.

Why China’s lost decade will be worse

There is one big difference between late-twentieth-century Japan and twenty-first-century China. The people of Japan were rich, prosperous and happy, whereas the people of China are predominantly poor, unhappy.

Also, Japan was already an advanced economy in the 1990s, when its stagnation started. On the other hand, China remains a developing economy. Therefore, Japan could withstand stagnation and maintain its position as an invaluable ally for the United States and other parts of the free world.

China, on the other hand, won’t be able to withstand any such pressure on its economy. It is not indispensable like Japan and changing global supply chains imply that the free world is ready to throw an authoritarian China under the bus. Therefore, an economic crisis in China would imply a complete downfall and not mere stagnation.

Finally, Japan was a democratic nation that allowed people to vent their anger against the government. However, China is a rigid and authoritarian nation that doesn’t let the people speak their minds. Beijing’s rigidity and growing frustration due to a lost decade could lead to a major revolution which would mean that China ceases to exist as we know it.