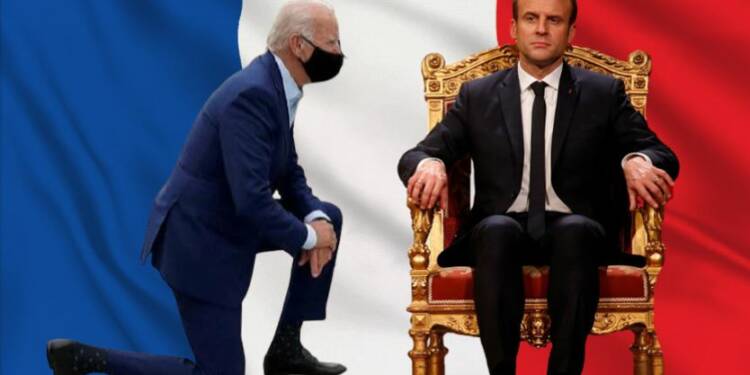 In an embarrassing demonstration of staggering levels of chaos in the US foreign policy, US president Joe Biden on Friday admitted to French President Emmanuel Macron that the signing of the AUKUS pact was a “clumsy” episode handled with a lack of grace.

Both leaders met in France’s Vatican embassy in Rome for the first time after a public fallout over the AUKUS security pact between the US, UK and Australia. The nuclear submarine deal between the US and Australia had resulted in the tearing up of a $66 billion contract between Australia and France, signed in 2016, to supply Australia with six diesel-powered submarines.

Biden on Friday revealed that he was under an impression that France has already been informed about the cancellation of the submarine deal with Australia. “I think what happened was to use an English phrase … clumsy, it was not done with a lot of grace,” Biden said. “I was under the impression that France had been informed long before, that the [French] deal was not going through,” he added.

In an attempt to dampen French fury over the matter, Biden also added that the US had no older or more loyal ally than France. Macron said that the two leaders had discussed the issue and “it was important to be sure that such a situation will not be possible for our future.”

This comes as Biden’s latest attempt to shore up America’s fast-plummeting cachet among the allies worldwide. After Angela Merkel departs from the office, Macron is slated to be the tallest EU leader in command of the EU’s foreign policy, especially in the Indo-Pacific.

Why ties between US and France matters the most to Biden?

For Joe Biden, preventing debilitation of ties between Washington and Paris holds utmost importance, given the latter’s key role in materialising trans-Atlantic objectives. France’s support is vital in realising closer co-operation between the EU and the US over issues like technology, climate change, trade and of course, China.

Not only that, but France could also press Brussels to take an unrelenting stance on policies concerning the US and the overall US-EU ties. The US was also worried that severing ties with France could lead to the destabilization of NATO, and could even push Paris to forge closer relations with Moscow.

When it comes to China, France’s role in the Indo-Pacific is beyond price. The French-US partnership is the one that the US can’t afford to relinquish. The severing of the French-American ties will not only weaken the global democratic campaign against China, but it will also shake the confidence of the US allies in the region.

“Like love, trust is something that is earned”, Macron had told Biden on Friday. The US allies were already left stunned at how the US brought devastation to Afghanistan in August this year. The hasty withdrawal had prompted even the UK to publicly criticise the US’s ill-thought move to withdraw troops without consulting the other NATO allies.

As the rift had widened between France and the US over the past two months, Macron focused on forging even closer ties with Indo-Pacific powers like India and Japan, to send out strong messages to Beijing and Washington. While Beijing remained an obvious target, France also intended to send a message to the US that it won’t refrain from outpacing the US in its campaign against China, by garnering support from the likes of New Delhi and Tokyo.

Washington seems to have very well received the message, as it now attempts to cool down the tensions running hot for weeks now. To keep the US’ interests afloat in Europe as well as in the Indo-Pacific, Biden has now rightly resorted to kneel before French President Emmanuel Macron.

The Last of Us 2 Ellie Tattoo: About the Game and Tattoo