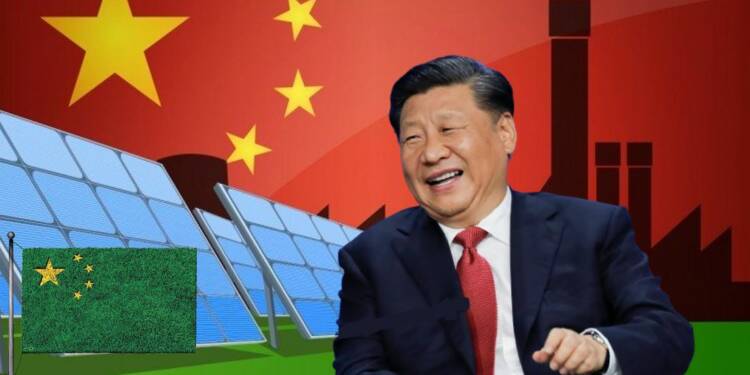 China is the biggest polluter in the world and releases more greenhouse gases than all other industrialized nations combined. Now, as the planet moves into a very difficult situation due to climate change and global warming, you would assume that China would act seriously. However, China has got some other plans- making money out of the climate crisis.

China is using a new misadventure to rob the west and global financial institutes. China is now focusing on green energy, as a part of President Xi Jinping’s flagship Belt and Road Initiative (BRI) that involves building connecting infrastructure from Asia to Europe. China is going through an economic crisis, due to which it doesn’t have enough funds to keep the BRI afloat. So, it is laying its eyes on the “Green Climate Fund” worth billions of dollars.

Xi Jinping launched the BRI in 2013. For the past eight years, China has used BRI as a foreign policy instrument. China has financed several infrastructure projects in eastern Europe, south Asia, central Asia, Africa and southeast Asia, under the BRI. The BRI investments were almost always made with preconditions and it forced recipient nations to make concessions in terms of trade and other areas.

China has had a history of making highly-polluting BRI investments since 2013. As per a March 2021 study published by the American research group ‘Council on Foreign Relations’ (CFR), about 90% of energy-sector BRI loans given by major Chinese banks were for fossil fuel projects and China was “involved in” 240 coal plants by 2016 itself. In 2018, 40% of BRI energy lending went to coal-fired plants. Those investments made the “promise to make climate change mitigation far more difficult”, as per CFR.

Not once did Xi Jinping think of the emissions that BRI investments worth $1.2 trillion created in the recipient nations, often leaving behind a layer of smog in parts of Eurasia, where the BRI projects operate. However, China suddenly wants to go green with BRI. The supposedly eco-friendly version of the BRI has now caught attention of around 70 nations involved with the BRI.

China trying to link up its Green BRI with the “Global Climate Fund”:

Interestingly, China launched its new form of BRI on October 18, coinciding with the 2021 United Nations Climate Change Conference (COP26) in Glasgow, Scotland. China could be looking to use the forum for pushing through its Green BRI and linking up its new kind of BRI investments with the global clean energy campaign.

China has every reason to shift from unclean energy to clean energy. The Chinese economy is presently embroiled in a deep crisis. China itself is facing a severe coal shortage crisis and even 25 overseas Chinese thermal projects were shut down by BRI countries since 2014 over lack of professionalism and ineffective implementation. This is a big setback for Xi, as the energy sector forms the very core of Xi Jinping’s flagship Belt and Road Initiative and forms 44 per cent of all BRI spending.

Moreover, the Evergrande crisis and the downfall of the highly indebted Chinese real estate sector has exposed banks and other financial institutions in the country to growing risks of some major debt repayment defaults. Chinese banks are bleeding and simply incapable of financing more BRI projects.

Therefore, China is looking at green energy. When it comes to green BRI, China has an easy target – “green climate fund (GCF)“, which was established in 2010 as “a unique global platform to respond to climate change by investing in low-emission and climate-resilient development”.

45 countries, 3 regions and 1 city, which predominantly consists of western and other advanced economies, pledged a total of USD 10.3 billion in the GCF by 31 July, 2020, and USD 8.31 billion have been confirmed as a part of the Initial Resource Mobilization (IRM) period. The US, Japan, the UK, France and Germany are top contributors to the fund and China is therefore looking to tap into billions of dollars being pumped into the GCF by the developed countries.

China has made up its mind. It can’t finance billions of dollars to fund infrastructure projects in developing and underdeveloped countries any longer. So, it wants to reduce the GCF into a cash cow catering to Xi Jinping‘s green BRI.