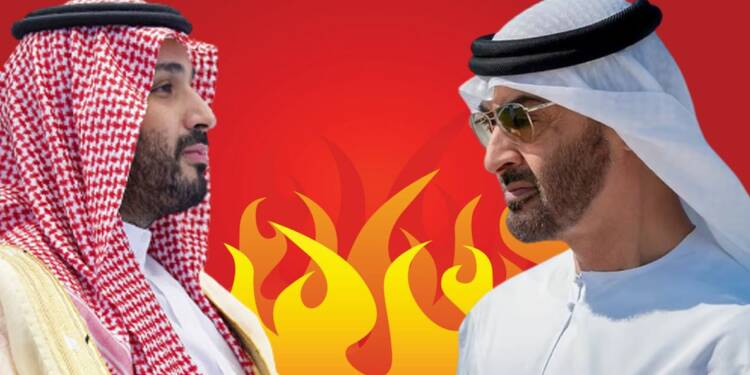 Saudi Arabia and the United Arab Emirates (UAE) are largely viewed as brothers in arms.  They seem like the France and Germany of Middle East, or perhaps even better, as France and Germany fought bloody wars in the twentieth century; but Abu Dhabi and Riyadh share no such bitter memories. However, the relationship between Saudi Arabia and the UAE is more complicated than you would think.

The UAE does accept Saudi leadership of the Muslim world, but the Emiratis are themselves growing into a big regional powerhouse which unnerves the Saudis. Now, in order to level things out, Saudi Arabia is looking to lure foreign capital and talent from places like the UAE.

Saudi Arabia has repeatedly given licenses to 44 international entities to set up regional headquarters in Riyadh. Multinational corporations like Samsung, Deloitte, Unilever, Baker Hughes and Siemens in sectors like technology, food and beverages, consulting and construction, are being invited by Saudi Arabia. De facto Saudi ruler Mohammed bin Salman is thus creating a neoliberal economy that reassures investors about Saudi Arabia and reduces the country’s dependence on oil. This essentially relates to the UAE.

History of Saudi Arabia and the UAE Relationship :

Saudi Arabia and the UAE share a good relationship since the days of Sheikh Zayed bin Sultan, who was the first President of the UAE. They just had so much in common – Arab culture, Sunni faith and active trade links which were already two centuries old. In fact, many UAE and Saudi families have common branches, which also encourages people-to-people ties.

Also, in the initial phase of their relationship, both the UAE and Saudi Arabia had a similar economic structure highly dependent on massive oil and gas reserves. The two countries cooperated on the oil embargo against the US over its support to Israel in the 1972 war.

In 1981, the formation of the Gulf Cooperation Council (GCC) brought the six Arab States closer, and the UAE and Saudi Arabia became the driving forces of the Arab world. The two countries have been military allies too – they were on the same side during the first Gulf War and committed troops for Kuwait’s independence. Later, they both condemned extremist movements like the Islamic State and the Muslim Brotherhood.

In terms of geopolitics too, Riyadh and Abu Dhabi have common interests. This is the reason why they have acted together in the Yemen war, pushed back against Iranian belligerence, and taken on Qatar.

Are Saudi Arabia and the UAE really good friends?

Also read: In 1996, UAE and Saudi were the first to support the Taliban. This time, they have a different plan

So, the UAE and Saudi Arabia rulers are sometimes affected by their personal interests in bilateral relationship. Take for instance the border dispute treaty in 1974. The UAE and Saudi Arabia signed the Treaty of Jeddah in 1974 to end forty years of conflict. Though the treaty was signed in 1974, the UAE argued that there were discrepancies in the formal text and the oral agreement preceding the signing of the treaty.

The treaty was signed at a time when Trucial States, consisting of Dubai, Abu Dhabi, Sharjah, Umm Al Quwain, Fujairah, Ras al Khaima and Ajman, had ceased to function as British protectorates and had come together to form the UAE. On the other hand, Saudi Arabia and Iran were US allies at the time and Washington D.C. supported both Tehran and Riyadh in a bid to safeguard its own regional interests.

A disgruntled UAE was therefore bound to feel that its border delineation was affected by American pressure. Till today, the UAE disputes Saudi claims over the Shaybah oil field to the south. It also claims a strip of coastline, bordering Qatar to the Northwest.

In 2004, the UAE also launched a public diplomatic campaign to persuade Saudi to revisit the Jeddah Treaty. In fact, the UAE-Saudi Arabia relationship has been affected by territorial differences. In 2009, Saudi officials stopped UAE citizens from entering the kingdom because they used identification cards that comprised a UAE map which included what Saudis claim to be a part of their territory.

After the death of UAE founder Sheikh Zayed al-Nahyan, the Saudi Arebia-UAE relationship got complicated for some time. Former Saudi Crown Prince Muhammad bin Nayef didn’t have a good relationship with the current UAE de facto ruler Mohammed bin Zayed, as the latter compared Nayef’s father to an ape.

In 2017, a series of leaked emails revealed that UAE’s ambassador to Washington had described Saudi leadership as “f***in’ coo coo!” in 2008. Yet, the steep deterioration in ties ended when Saudi Crown Prince Mohammed bin Salman (MBS) took over as the de facto leader of his country. Mohammed bin Zayed is regarded as Salman’s “mentor“, which allowed the two leaders to get along.

In the recent years, you won’t get to see any visible friction in the UAE-Saudi ties. The UAE seems to work under the broader umbrella of Saudi leadership, but still, some issues persist. The UAE has been getting really competitive and moving ahead quickly, while Saudi Arabia lags behind.

Also read: Forget Saudi Arabia, move over Iran and ignore Turkey – The UAE is the king of the Muslim World

On the diplomatic front too, the UAE was quick to evolve. Last year, it signed the Abraham Accord and normalized relations with Israel. Saudi Arabia, on the other hand, had no choice but to approve the development because of American involvement. By signing the Abraham Accord however, the UAE ensured that it became a leading American security partner in the Middle East. It also got hold of the most modern American fighter aircraft- the F-35, before Saudi Arabia. Over the past few years, the UAE has been already involved in military campaigns in Libya, Yemen and Syria, which brings it very close to the US.

The UAE did show one small sign of challenging Saudi leadership earlier this year, when it challenged a Saudi-led deal at a meeting of OPEC+ to raise production beyond the limit set for early next year. The UAE blocked the agreement, described it as “unfair” and demanded a rise in its own production.

Saudi Arabia too understands that the UAE will never rebel, but with its growing regional influence, Abu Dhabi can simply replace Saudi Arabia. So, MBS is doing what he can do to level things out.