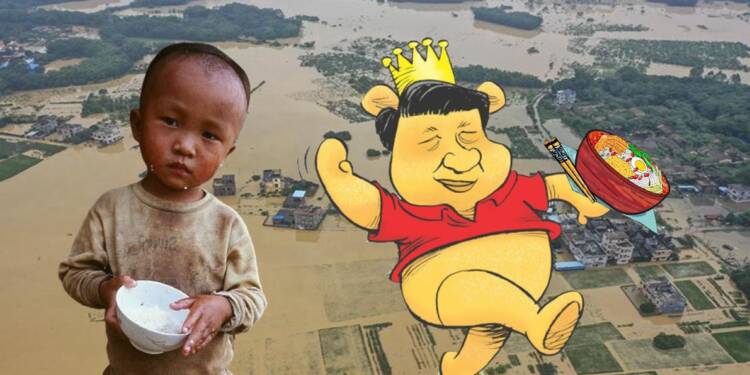 The Chinese government has issued a new directive – store as much food as you can. The Xi Jinping administration is also looking to cut the amount of food wasted in Chinese households and the sudden administrative actions have instilled panic in China about an impending food shortage crisis. There are four major factors at play:

Beijing has asked people to keep daily necessities in stock in case of emergencies, following COVID-19 outbreaks in the country and excessive rains that have sent vegetable prices soaring in the communist nation.

The latest directive by the Chinese Commerce Ministry has caused panic among the Chinese citizens. Social media users in the country have expressed concern about how the ongoing food shortage crisis may have been triggered by growing tensions with Taiwan.

The Commerce Ministry has asked local officials to ensure adequate supply and stability of prices. It also asked local officials to give early warnings in case of any supply disruptions. The prices of cucumbers, spinach and broccoli have more than doubled since early October. At $2.60 per kg, spinach was more expensive than some cuts of pork as per a vegetable price index in an important trading hub in Shandong.

Local authorities in China have also been asked to purchase vegetables that can be stored well in advance, in a bid to strengthen emergency delivery networks, and guarantee smooth and efficient distribution channels. Moreover, the Chinese State-planning body has also urged local governments to support fast-growing produce, while encouraging replanting of vegetables.

Meanwhile, the Economic Daily, a Chinese Communist Party (CCP) mouthpiece, asked netizens not to have “too much of an overactive imagination”. The CCP-backed newspaper claimed that the purpose of the latest directive was to ensure that citizens were not taken by surprise in case of an abrupt lockdown in their area.

China simply doesn’t believe that it can make enough food resources available to feed its citizens. Therefore, the Chinese government has decided to strengthen its efforts to reduce the amount of grain lost at harvest and food wasted in kitchens across China.

Xi Jinping has actually been looking to reduce food wastage as a part of his broader strategy to ensure food security during the Coronavirus pandemic. The Chinese government published a plan that states that “tangible results” have been achieved thus far, but more can be done to build a “high-quality, more efficient and more sustainable national food security system”. It called for higher seed standards to promote multi-resistance crop varieties, new technology for precision planting of wheat, and intelligent and efficient harvesters.

How China ran out of food?

There are two broad issues:

Food demand usually shoots up in China ahead of the Lunar New Year, which will fall in early February next year. The Chinese government also makes effort to bolster supply of fresh vegetables and pork, ahead of the most important holiday in China.

To worsen China’s crisis, diesel supply shortages have also hampered food supplies. As per another CCP mouthpiece Global Times, “Gas stations in many parts of China are running out of diesel after supply constraints posed by the booming demand for coal transportation and factories using diesel to generate electricity”.

Global Times added, “The latest diesel crisis has hit the cargo business, especially smaller operators with limited cash flow and bargaining power”. It further added, “An employee with a logistic company based in Qingdao, east China’s Shandong Province, said that they turned down new orders or those involving long distance transport, because of the high diesel price”.

It also quoted an analyst as stating that truck drivers are quite sensitive to diesel price hikes because they bear the brunt of any price change.

Truck drivers in China are simply not ready to carry on their business, which is creating a whole new type of bottlenecks in Chinese food supply sector. Chinese citizens are now bound to get hungry and this will send warning bells ringing for Xi Jinping, as loyalty can’t be extracted out of citizens with empty stomachs.