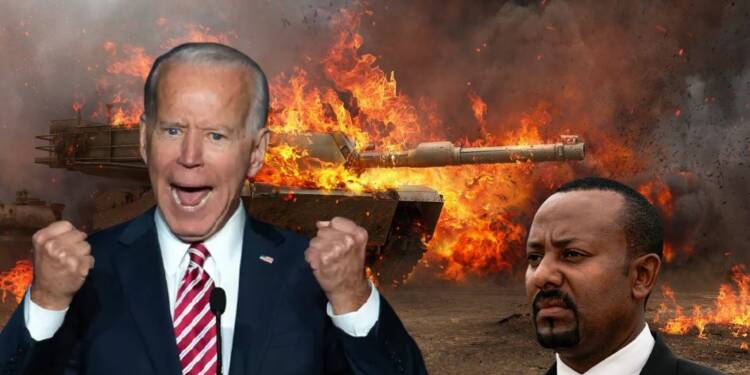 The Biden administration has lost another campaign, this time in Ethiopia, in East Africa. However, unwilling to realise or even accept the developments, it has increased diplomatic and counter mobilisation in support of the TPLF (Tigray People’s Liberation Front). The United States has been supporting militants from the TPLF, who have been fighting the Ethiopian government in Tigray’s northernmost province. Except for the United States, no one wants to back the TPLF fighters in their attempt to split up Ethiopia. Even a US ally, the United Arab Emirates (UAE), is supporting Ethiopia against the Tigray fighters.

Now, due to increasing security situations, the United States is encouraging all of its people in Ethiopia to leave “as soon as practicable.” The US embassy in Addis Ababa issued a security notice on Friday, advising Americans to leave the country as soon as possible and offering aid in securing plane travel from Bole International Airport. The kind of scare the US and its affiliates are creating regarding the Ethiopian government,  is sort of a psychological warfare, which could be followed by the US entering the fray in totality.

Reasons for US involvement:

The US has its reasons to do what it is doing. The US has a very limited presence in the Horn of Africa, a strategically crucial region that offers access to Yemen, the Gulf of Aden and the Red Sea, apart from serving as the source of the River Nile. As the Horn of Africa embraces an era of peace and prosperity, and Ethiopia and Eritrea marginalize the TPLF, the US is getting nervous, and Biden is increasingly trying to drum up support for the TPLF.

Since Ethiopian Prime Minister Abiy Ahmed sent soldiers in to subdue rebel rebels in the country’s Tigray region a year ago, fighting has raged in the north. According to the United Nations, all parties to the conflict have broken international humanitarian law, citing reports of killings, gang rapes, and ethnic cleansing.

Also read: To understand the Ethiopian war, one must understand Eritrea

The warning comes as Secretary of State Anthony Blinken urged all parties involved in Ethiopia’s conflict to begin peace talks. “The US is concerned by reports of arbitrary detentions based on ethnicity in Addis Ababa,” Blinken said, adding that heated language on all sides of the issue “pushed a peaceful resolution further away.”

He addressed a forceful message to all parties involved in the crisis, urging the Ethiopian government to end its military assault, Eritrea to withdraw its forces from Ethiopia, and Tigrayan rebels to halt their approach on the capital. While he was trying to be politically correct, it is amply ear that he is scared by the fact of stability in the region, as it will rove the US influence and interest in the Horn of Africa region. Now as the fighting intensifies and the US finds itself on the losing side, it is getting the ground ready for the end game, and to destabilize the region further.

Under Biden, the US is generously pumping dollars into the Chinese economy and keeping it alive