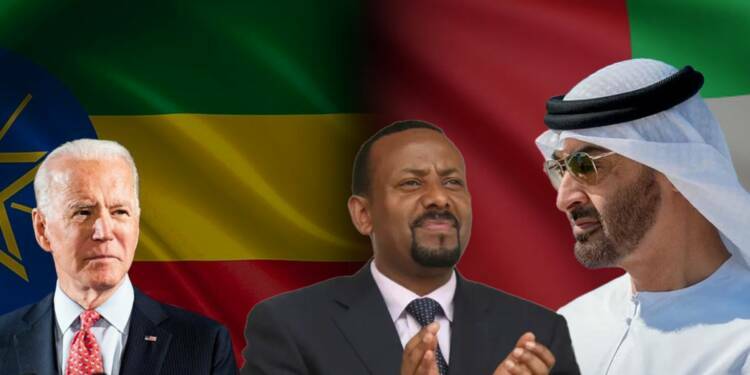 Obama’s legacy is painted as a rosy, revolutionary and absolutely utopic one by the American mainstream media. For them, Obama was the God of freedoms and humanity and they continue to push that belief down our throats even today. But what does the world think of Obama? What do American soldiers, who he used as pawns think about him? Well, the answer is a tough one to digest. Under Obama, the US promoted the Arab Spring in several Arab nations. The plan was to overthrow several regimes, like that of Gaddafi in Libya or Assad of Syria. But it led to the rise of numerous terrorist groups, the Muslim Brotherhood, and a greater influence of Turkey and Qatar. Once Obama’s deputy, President Biden wants to continue this legacy, this time in the horn of Africa. But he faces a problem. USA’s own allies are not with him. They know what he intends to do and they will not let it happen. The UAE is the biggest example of this defiance, and Ethiopia is the battlefield.

The Biden administration has again found itself on the losing side— this time in East Africa’s Ethiopia. The US has been backing the Tigray People’s Liberation Front (TPLF) insurgents who have been engaged in an armed conflict with the Ethiopian government in the country’s northernmost region of Tigray. However, no one except the US wants to support the TPLF fighters in their bid to break up the nation of Ethiopia. In fact, even a US ally like the UAE is backing Ethiopia against the Tigray fighters.

Backed by the UAE and even the African Union, Ethiopia has managed to decimate the US-backed Tigray fighters with relentless aerial bombardment. So, what makes Ethiopia so important that the UAE too decided to defy the US and back Addis Ababa?

As per Reuters, Ethiopian forces have carried out aerial bombardment in Tigray’s regional capital city of Mekelle for at least four days this week. On Friday, even a UN aid plane couldn’t land in Mekelle due to the ongoing airstrikes being carried out by the Ethiopian forces.

As the US threatens to add more sanctions on Ethiopia, the UAE is admittedly sending tons of medical and other aid supplies to Ethiopia. Mohamed Salem Al Rashedi, the UAE Ambassador to Ethiopia, said, “The UAE has a strong relationship with Ethiopia, and this assistance is part of the directives of the UAE’s wise leadership to provide humanitarian and development assistance to brotherly and friendly peoples.”

However, things may be going even further now. The Ethiopian National Defence Force (ENDF) is presently on a shopping spree. It needs new weapon systems to defeat the rapidly advancing TPLF-backed insurgents. The UAE is also allegedly supplying drones to Ethiopia.

Ethiopia is looking at Iran and the UAE for acquiring new weapons and it is the UAE that seems to be winning the race. In the future, these dynamics would decide which way Eritrea and Ethiopia, both working together right now, will tilt. And that may decide the winners of the Yemen war where the UAE and Saudi Arabia are fighting the Iran-backed Houthi rebels.

In the past 53 days or so, at least 51 suspicious cargo flights reportedly reached Ethiopia. Most of these cargo flights landed at the Harar Meda airbase in Ethiopia. 45 of those cargo flights originated in the UAE while only six came from the Shi’ite nation of Iran. The UAE hasn’t revealed what the cargo flights carry, but it is believed that they are being used to transport military equipment to Ethiopia.

The UAE reportedly uses a number of front companies for the delivery of weapons to a country in which it is not officially involved. This is how the Gulf nation is also known to support the Khalifa Haftar regime in Libya against the Turkey-backed regime. The frequent Emirati cargo flights to Ethiopia make it clear that the United Arab Emirates is not abandoning Ethiopia.

Meanwhile, the UAE seems to be further assuring Ethiopia about its support. Crown Prince of Abu Dhabi and Deputy Supreme Commander of the UAE Armed Forces, Sheikh Mohamed bin Zayed Al Nahyan, congratulated Ethiopia’s Prime Minister Abiy Ahmed, who got re-elected to lead his country for another five-year term.

Ethiopia winning despite US pressure

The Ethiopian forces are quite clearly winning the war against the TPLF despite the US imposing sanctions on the East African nation. This essentially relates to the geostrategic advantage that Ethiopia enjoys.

Ethiopia is strategically located in the Horn of Africa, which is a gateway to major world shipping flows via the Red Sea and the Suez Canal to the Mediterranean. Ethiopia itself is located close to war-torn Yemen. Therefore, Arab nations and Iran want to shore up their influence in Ethiopia in order to gain an advantage in the conflict-ridden nation. Finally, the landlocked nation of Ethiopia borders Djibouti, where many big powers like the US and China have established military bases.

So, despite US sanctions, the UAE feels the need to help and arm Ethiopian forces to take on the TPLF fighters. The UAE, being a regional powerhouse has shown willingness to get involved in different conflicts including the Yemen war, the Syrian civil war and the Libyan civil war. The Emiratis understand that they must prioritize their own interests over Biden’s ambition of destabilizing Ethiopia and establishing a puppet regime in the East African nation.

After all, the Yemen war may end any time and it will make sense for the UAE to be in the good books of Addis Ababa as Ethiopia is located in close proximity to wartorn Yemen.

On the other hand, Ethiopia is also getting a lot of support from Russia, which is itself looking to consolidate its position in the Horn of Africa. In Ethiopia, waving Russian flags has become a symbol of anger against the US ‘meddling’ in the East African country’s internal affairs.

Russia has even signed a military cooperation agreement with Ethiopia. Such clear support from Russia and the UAE is allowing Ethiopian troops to make rapid advances against the Tigray fighters.


Why US meddling can never succeed in Ethiopia

To put it simply, the Biden administration is desperate. It is pushing a misleading narrative that projects the Tigray fighters as victims and the Ethiopian Prime Minister Abiy Ahmed as some sort of an aggressor. The Biden administration talks of a ‘humanitarian intervention’ in Ethiopia, which really shows a desire to force a regime change in the East African nation.

However, the US narrative doesn’t really fit the Ethiopian National sentiment. Ethiopia is no small African nation that can be crippled by American intervention. It is the second-most populous nation in the African Continent and an ambitious one at that. While the US projects TPLF as some sort of a victim, the insurgent group actually enjoyed political power for over two and a half decades as a part of a TPLF-dominated coalition government from 1991.

The TPLF fell out of favour in Ethiopia because Ethiopians didn’t want it to stay. Ethiopia consists of three main ethnic communities:

The Oromo and the Amhara felt that they were being marginalized by the Tigray minority under the rule of a TPLF-dominated coalition, which funelled a large share of national resources into the Tigray region. This is why Abiy Ahmed, a man of mixed Oromo-Amharic parentage won favour with the two majority communities and came to power in 2018.

Today, the US may project Abiy Ahmed as some sort of a strongman but the fact remains that Ethiopians like him. He is the one who got the Ethiopia-Eriteria peace deal concluded, which even the US had to acknowledge and Ahmed was also bestowed with the Nobel Peace Prize for the historic deal. Today, even Eriteria is supporting Ahmed’s war effort against the TPLF.

Currently, Ethiopia seems to be in a comfortable position. Since the early 2000s, the Ethiopian economy has grown rapidly and has consistently clocked a GDP growth of over 10 percent. The country is looking to industrialise.

The Grand Ethiopian Renaissance Dam is the biggest symbol of Ethiopia’s growing ambitions. The megadam to be built on the Blue Nile River, which originates in Ethiopia, has been a point of controversy between Ethiopia, Egypt and Sudan. However, if and when it is built, the megadam will help Ethiopia in generating enough hydroelectricity to solve its own power problems and also those of its neigbours.

The US has abandoned Ethiopia. But the East African nation is clearly maneuvering its relations between big powers like China and Russia. Ethiopia is banking on Russia for defence needs and China for investment needs. At the end of the day, Ethiopia is avoiding becoming a client State of any nation and is maintaining its strategic autonomy.

Biden’s ‘humanitarian intervention’ in Ethiopia is thus a non-starter as Ethiopia pushes back against TPLF insurgents and also sustains its ambitious growth story.