Under Biden, the US is generously pumping dollars into the Chinese economy and keeping it alive 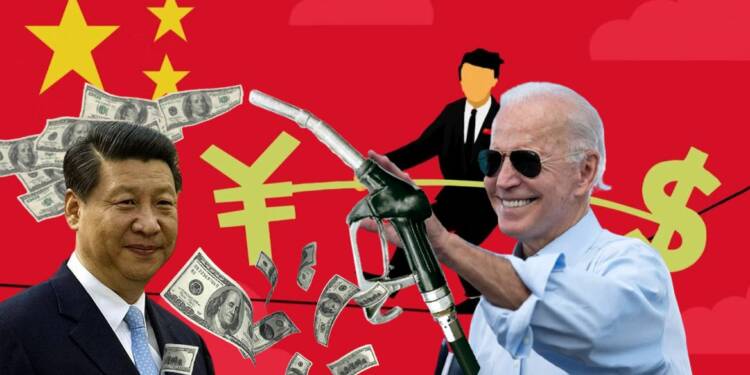 The Biden administration has failed on so many fronts, that even multiple volumes of research will not suffice the depth of stupidity this administration has delved in and unfortunately dragged the whole of US with it. Now, it has stooped to helping its adversary China out of the socio-economic crisis, which was the making of Chinese leader Xi Jinping himself. Be it the release of the Huawei CFO, betraying allies like Taiwan and toeing One China policy to placate Beijing, or restarting trade talks with the regime which is currently undertaking industrial scale genocide in Xinjiang. Now, the Biden administration has come to the rescue of a rapidly deflating Chinese economy.

As reported by Bloomberg, unprecedented trade surpluses and historic bond inflows have given China a dollar stockpile not seen since the ‘Asian savings glut’ was blamed for keeping US interest rates artificially low and stoking the subprime mortgage crisis. However, unlike back then, when China aggressively recycled its dollar assets into US treasury bonds, China’s massive stockpile of foreign exchange reserves has remained relatively constant. That indicates that the money is going somewhere else, although where exactly is proving to be a bit of a mystery.

The unprecedented inflow of dollars:

As per reports, while some of that flood of greenbacks is ending up as deposits at Chinese banks, the large ‘errors and omissions’ in the nation’s balance of payments is muddying the picture. Even if individual corporations like China Evergrande Group struggle to repay their debts, it is evident that the dollar provides China with a significant cushion against future global economic shocks. “Chinese macro policy has become a big bet on U.S. growth as it attempted to replace its credit impulse via the current account,” Jon Turek of JST Advisors wrote in a recent research. Jon added, “China tightened credit while the external-account surplus blew out. This allowed China to import the aggregate demand that it was ‘sacrificing’ from reducing credit growth.”

As reported by Bloomberg, Foreign currency bank deposits are just shy of a record $1 trillion, while the trade surplus in the first nine months of this year hit about $440 billion compared with the 2015-2019 average of $336 billion and 2020’s $325 billion, according to Morgan Stanley estimates.

The US capitulation to China under Joe Biden:

Earlier, Joe Biden spoke from a position of weakness in his first-ever speech as the President of the United States, at the United Nations. America’s fallout with France overshadowed the celebrations of the AUKUS initiative. Doubts are emerging over the US’ commitments, after Biden’s botched-up Afghanistan withdrawal. Hence, Biden could have very well used this opportunity to re-energize America’s allies through a charm offensive campaign against a belligerent China; instead, Biden chose to squander it.

Biden’s yielding at the UN also came days after he attempted to please Chinese President Xi Jinping over a phone call. In his first engagement with Xi Jinping after a gap of seven months, Biden vowed to avoid conflict with China. A White House statement read, “President Biden underscored the United States’ enduring interest in peace, stability, and prosperity in the Indo-Pacific and the world and the two leaders discussed the responsibility of both nations to ensure competition does not veer into conflict.”

Now with the dollars flowing in, analysts are not able to make sense of how Beijing is able to attract such inflow of forex, when it is going through such an economic crisis. As a result, we can see that the yuan’s continued success is a result of the influx of dollars; it has been Asia’s best performing currency against the dollar, this year. But that doesn’t explain what’s going on with all those greenbacks. However, we can be sure that Biden administration has eased the channels of transfer of money.

Singapore must untangle itself from China before it is too late