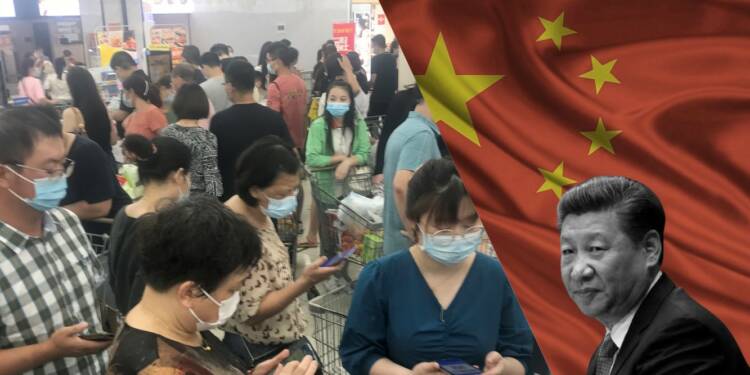 Social media in China is rife with rumours of war with Taiwan. With the energy and economic crisis bulking larger, hyping up tensions with Taiwan seemed a convenient idea to the CCP to shore up its fast-sinking fortunes. People’s Liberation Army or the PLA’s repeated aerial incursions aimed at intimidating Taiwan only fuelled the speculations on Chinese media that their country could soon go on a war with Taiwan. The CCP envisioned that tensions with Taiwan will help it materialise its “rally around the flag” strategy, and will nullify the existing resentment among the Chinese populace. However, the plan backfired spectacularly, causing widespread panic in China and Chinese markets.

A notification that stormed the CCP’s boat

Furthermore, a notification issued by the Chinese Commerce ministry set the cat among the pigeons by encouraging people to stockpile food and other necessary items. This was viewed as the CCP’s warning of an imminent war with Taiwan by the Chinese social media, sparking fears among the public and fuelling panic-buying and online speculations. Local media reported that there were scattered reports of runs on rice, noodles and cooking oil in some Chinese cities. Already ravaged by Pandemic, the war-mongering comments by Chinese state media and social media were enough to stir turmoil in the Chinese markets.

Widespread panic-buying and hoarding further aggravated the food crisis in the country, prompting people to go all out to secure food supplies. The chaos spread so much that the CCP had to deploy its state media to quash the rumours of war with Taiwan. On Tuesday, the Economic Daily published a commentary urging the public “not to over-read” a Chinese Ministry of Commerce statement. Later on, the PLA itself attempted to downplay the threats of war by denouncing the mobilization rumours as a “vile” and “malicious fabrication.”

The PLA-linked account stated, “It will not only cause negative impact to the state, the military and society, it could also lead to severe consequences.” The CCP, which was striving to fuel tension with Taiwan to force people to throw their weight behind the communist regime, eventfully found itself caught in the trap that it had laid down itself to rally the Chinese people. After fuelling Taiwan tensions for so long, the CCP and the PLA had to taste their own poison as they struggled to manage public sentiments over the Taiwan issue.

This raises serious questions over China’s capabilities of waging a war against even a weaker and much smaller neighbour like Taiwan. The episode shows how a mere rumour of war is enough to destabilise Chinese society in such a great deal. This also reflects Chinese people’s waning confidence in the PLA’s capabilities to successfully drive China out of such a military crisis.

Forget about PLA’s capabilities and readiness to take down an adversary in an all-out clash, even the Chinese people are not ready to bear the brunt of the consequences that would usher in as an immediate result of the PLA’s adventurism overseas. If the rumours can destabilise Chinese markets and supplies chain in such great proportions, we can only imagine the ramifications of a real war. This could even instigate a civil war in no time.

For the first time, the CCP is forced to acknowledge that destabilisation at home is a larger threat for the CCP than Taiwan. There is a lack of consensus even among the PLA to siege Taiwan by military force. PLA veterans believe that waging a military war against its “own people” will send a wrong message to the mainland Chinese.

Taiwan issue is a double-edged sword for the CCP. It can’t let Taipei cherish ambitions of seeking independence from the CCP; however, stoking anti-Taiwanese sentiments beyond a certain limit doesn’t bode well either. The CCP’s predicament stems from the fact that the communist regime is heavily disliked in China. And despite fierce pushback from almost all sections of the Chinese society, CCP’s only aim is to devise strategies to keep its reign afloat and running.

But sooner or later, every tragic story has an end to meet. Looks like CCP’s end is here.