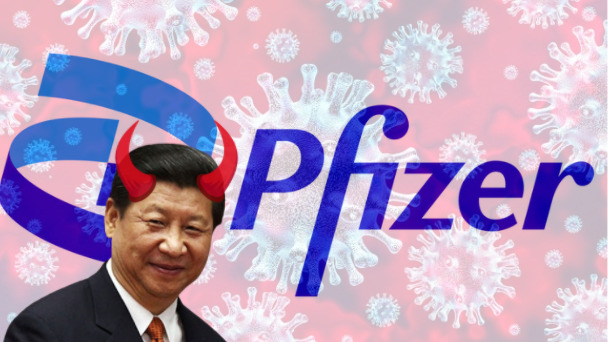 Who are the two biggest benefactors of the Covid-19 pandemic? One is of course China. The other is the American Biopharmaceutical company “Pfizer”, which is expecting its new jab to bring in revenue of a whopping $36 billion this year. Now as Pfizer faces allegations of falsifying data, unblinding patients about the trial and employing inadequately trained vaccinators; it becomes important to look into the iniquitous alliance of the CCP, which has allegedly engineered Covid-19; and the World’s first Covid-19 vaccine maker, Pfizer Biotechnology Corporation.

A partnership between CCP and Pfizer

The incipient signs of the budding partnership between the two began emerging in 2010 when Pfizer opened one of its Research and Development facilities in Wuhan. It was the first Fortune 500 Company to be located at China’s National Bioindustry Base in Wuhan, also known as “Biolake”. As of 2016, the American company employed around 500 people at the Wuhan Site, out of which 69 were the known members of the Chinese Communist Party. By 2015, Pfizer had started moving its “medicine safety business” from India to its R&D base in Wuhan.

Now let’s look at what role does the Wuhan base play in the development of the new vaccines for Pfizer. As head of Pfizer (Wuhan) Research & Development Co Ltd, Lan Zhanghua suggests, “We developed beyond expectation. Now the Wuhan team has comprehensive coverage in Pfizer’s medicine development. Every one of Pfizer’s new drugs has indispensable contributions from the Wuhan team.” He further adds that two of the twelve functions in the R&D process are exclusively performed at the Wuhan base and nowhere else in the world. Lan also tells that “No other but our Wuhan teams manage the clinical trial registry information and clinical trial master files for all Pfizer’s medicines.”

It is abundantly clear how Pfizer witnessed its exponential growth in China at the behest of the CCP and the local administration. As per a China Daily report, “Another boost for Pfizer’s success in Wuhan is the government’s support and efforts to amass bio-industry thought leaders, professionals and investment to consolidate Biolake’s leading competitiveness.” The fact that CCP members are employed at Pfizer’s research and training centres in China is itself explanatory of the two’s shrouded coalition.

Make no mistake, Wuhan is the place where the Corona Virus is believed to have made its way to Humans. Wuhan Institute of Virology is at the centre of all controversies, where the CCP has allegedly developed and engineered the Covid-19 causing Corona Virus, to use it as a bioweapon against the World. Even India’s National Security Advisor Ajit Doval recently hinted that Covid could be a Chinese bioweapon. Speaking at the Pune Dialogue on National Security 2021, NSA Ajit Doval had said that “The deliberate weaponization of dangerous pathogens is serious concern. This has heightened the need to build comprehensive national capabilities and bio-defence, bio-safety and bio-security.”

Meanwhile, China’s unrelenting attitude on preventing a transparent and thorough investigation into Covid-19 origins and its blatant propaganda to shift the blame of Covid origin onto other nations have only solidified the claims of Covid being a Chinese bioweapon. Interestingly, it was only the Chinese government and Pfizer who made the most out of this crisis. While the CCP earned billions of dollars by exporting masks, ventilators, drugs and vaccines to the suffering nations; Pfizer reported its earnings and sales more than double in the past quarter.

Pfizer reported adjusted earnings of $7.7 billion, up 133% from a year earlier. The company’s revenue soared to $24.1 billion, up 134%, and both easily cleared results were forecast by analysts. This year alone, the Covid-19 vaccine has brought in revenue of $24.3 billion for the company. Hence, it won’t be an exaggeration to say that Covid-19 came as a boon for the American biopharmaceutical company.

But that’s just the tip of the iceberg. The vaccines developed by Pfizer also lack credibility and effectiveness. The British Medical Journal (The BMJ) recently published an investigative report titled “Covid-19: Researcher blows the whistle on data integrity issues in Pfizer’s vaccine trial” that raises some really serious questions regarding the Pfizer vaccine trial data. As per the British Medical Journal, Brook Jackson, who was employed at the research organisation Ventavia Research Group, alleged that the Pfizer company falsified data, unblinded patients, employed inadequately trained vaccinators, and was also slow in responding to the adverse incidents reported in Pfizer’s pivotal phase III trial.

All these startling details lead us to some important questions—Were the CCP and Pfizer hand in glove not just in engineering the Coronavirus but also in developing the vaccine? The other important question is, did Pfizer know about the discrepancies in its R&D process of the Covid vaccine development program and what were its intentions behind employing CCP members at its Wuhan R&D site? The answers to these questions are just an transparent investigation away, and it’s the high time Americans hold this private corporation responsible for all its evil deeds.