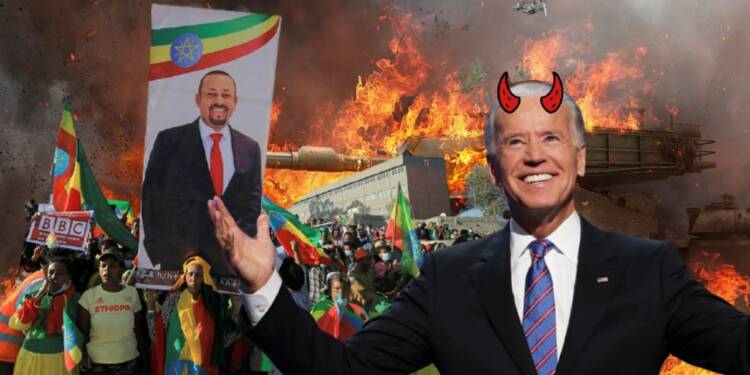 From Addis Ababa to Washington DC, thousands of Ethiopians are taking to the streets against the Biden administration’s blatant support to Tigray People’s Liberation Front (TPLF). People are livid at Biden’s attempts to turn their country to the likes of Afghanistan. With holding placards reading “Shame on you USA” and “Stop Sucking Ethiopia’s blood”, Ethiopians are accusing the US government of supporting the “terrorists” who want to destroy their country.

“They want to destroy our country like they did to Afghanistan. They will never succeed, we are Ethiopians,” said 37-year-old protester Tigist Lemma. Many Ethiopians are also angry at USA’s call to initiate negotiations between TPLF and the Ethiopian government, which they see as a betrayal to their homeland. With enormous support pouring in from Washington, separatist Tigray Forces have now started overwhelming the government-backed security forces, threatening the very existence of the Ethiopian state.

Start of the war in Ethiopia:

The TPLF is essentially a violent separatist group in Ethiopia led by the country’s former rulers, since decades. The Tigray’s People’s Liberation Front was ousted from the government in 2018, after nearly three decades of repressive rule, which prompted the TPLF members to wage a battle against the government forces from Ethiopia’s northernmost region of Tigray.

The TPLF fighters had launched an attack on the Northern Command headquarters of the government-backed Ethiopian National Defense Forces (ENDF) in November 2020, which augmented the conflict to an extent that has now pushed the entire country on the verge of an all-out collapse.

After having lost much of the country’s northern Tigray region and parts of the neighbouring Amhara and Afar regions to the rebels, Ethiopia’s Prime Minister Abiy Ahmed Ali in October decided to bring an end to the conflict by launching a massive offence against the Tigray forces. However, the campaign didn’t bide well for the government, which saw its forces losing one battle after another to the rebels. Resultantly, Ethiopia’s capital Addis Ababa is now vulnerable to any external threat, prompting the government to declare a state emergency this week, as troops struggle to fortify the vital transport routes and rail lines to Djibouti.

Government on a verge of collapse:

And it is not just TPLF that has wreaked havoc on the Ethiopians, but other Anti-Abiy forces have also joined hands to forge a united front against the government. For instance, Tigray forces have been cooperating with Oromo Liberation Army (OLA) that has vehemently intensified the conflict, with OLA closing in on the capital from the southwest.

Ethiopia is a culturally rich country, with scores of ethnic groups residing in harmony since decades. However, the internal conflict has turned Ethiopia’s this great asset into a liability, where the widening ethnic gaps are threatening the unity of the state. Propaganda war and hate speech campaigns emanating from social media, including Facebook and Twitter, have only exacerbated the problem.

And like this was not enough, foreign interventions have also played a huge role in aggravating the problem. For instance, the Biden administration in September announced sweeping sanctions against the Ethiopian government. Biden had then said that he is “determined” to halt the fighting. He had also vowed to “push for a peaceful resolution of this conflict”, while calling on warring parties to halt hostilities immediately. Instead of taming the conflict, the sanctions against the Ethiopian government greatly emboldened the TPLF and other rebel aggressors.

Also read: Hounded by US sanctions, Ethiopia is using China only to dump it later

Meanwhile, Russians are believed to have thrown their weight behind the Ethiopian government along with the UAE (United Arab Emirates). Russia is challenging the status quo in Africa, using insecurity and diplomatic disputes with western powers as a springboard to expand its presence on the continent. From Libya to Nigeria, and Ethiopia to Mali, Moscow has been building key strategic military alliances and an increasingly favourable public profile across Africa, in recent years. Ethiopia too has signed military cooperation agreement with Russia, indicating Moscow’s increasing influence over the country.

As the US threatens to add more sanctions on Ethiopia, the UAE is also admittedly sending tons of medical and other aid supplies to Ethiopia. Mohamed Salem Al Rashedi, the UAE Ambassador to Ethiopia, recently said, “The UAE has a strong relationship with Ethiopia, and this assistance is part of the directives of the UAE’s wise leadership to provide humanitarian and development assistance to brotherly and friendly peoples.”

Four roads to the solution with a single destination:

Behind the curtains negotiations between the two warring sides are believed to be undergoing in Kenya. However, any settlement is highly unlikely, given the unrelenting attitude of both sides.

The current situation in the war-torn country may lead us to any of the four conclusions, and alarmingly, all of them threaten the very existence of the Ethiopian state. Here are the four possible outcomes, and each of the mentioned conclusions may usher in a gruesome period of violence and instability in the region:

Ethiopia, a highly ambitious country having the status of the most developing nation in the region, is on the brink of a collapse. That explains the fury of Ethiopians living across the world, staging protests against the US and western media in major cities. Biden could easily have supported the democracy in Ethiopia by supporting the Abiy government and helping it eradicate the TPLF menace. But, for mere geopolitical gains, Biden chose to set the entire region on fire.

Today, Ethiopia is on the verge of a collapse, and Biden’s insanity is to be blamed for it.