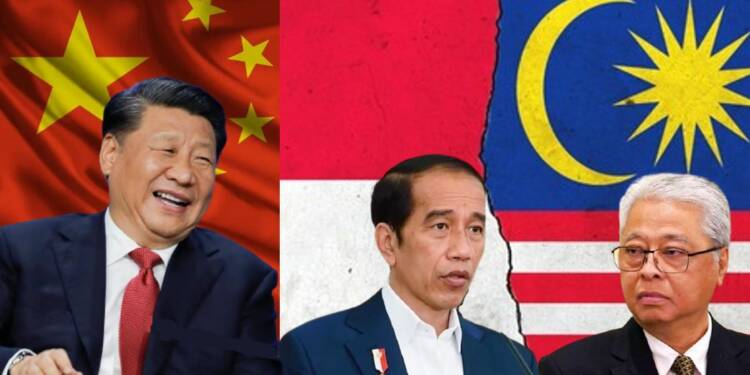 Apart from sharing language and culture, what Malaysia and Indonesia also share are the hostilities and historical confrontations with each other. Their differences trace their roots back to the colonial era, when the region was contested among European colonial powers, notably British and Dutch.

The Anglo-Dutch Treaty of 1814 and 1824 shaped the territories of Indonesia, Malaysia and Singapore. These treaties officially divided the archipelago into two parts: British Malaya, which was ruled by the United Kingdom (UK), and the Dutch East Indies, which was ruled by the Netherlands. The successor states of British Malaya and the Dutch East Indies are today called Malaysia and Indonesia, respectively.

Indonesia’s disapproval of the Malaysian state:

While the Dutch relinquished control over Indonesia much earlier in August 1945, Malaysia remained under the UK’s control until 1963. However, President Sukarno of Indonesia, who served in the office from 1945 to 1967, vehemently opposed the idea of the formation of a separate Malaya state. Instead, he wanted British Malaya to be included in Indonesia’s territories.

Interestingly, Indonesia’s Sukarno government got excessive diplomatic support from China, in attempting to stymie the formation of Malaysia. Sukarno later launched the “Crush Malaysia” campaign in 1963, which got actively aided by China’s myriad propaganda outlets. China’s People’s Daily called the Federation of Malaysia a “neo-colonialist product of British imperialism with Washington’s blessing”.

But despite the Sukarno government waging a war against the UK-ruled Malaysia between 1963 and 1966, the Chinese and Indonesians could not stop the proclaiming of the Malaysian state.

China joins hands with Indonesia to weigh down Malaysia’s sovereignty:

China’s support to Indonesia was deemed as a marriage of convenience, as both the states were largely ostracized on the world stage. On the other hand, China got itself enmeshed in various conflicts with the Soviets and the Americans. Thus, it desperately needed a partner to devise a “third-force strategy” against the imperial superpowers.

China feared that the west could use Malaysia as a hotbed for the anti-communist campaign in its neighbourhood. China’s anxiety reached a new degree in November 1964, when Malaysia announced the opening of the nationalist Chinese government Consulate General, in Kuala Lumpur. Beijing reacted strongly to the decision and accused Malaysia of extending its support to the Taiwanese separatists.

End of Indonesia’s confrontation against Malaysia in 1966:

However, the Sino-Indonesian co-operation on the Malaysian front came to an end, when the communist party PKI and leftist elements including the President got ousted in 1965-66. In 1966, Indonesia officially ended its confrontation against Malaysia, leaving China’s propaganda against Malaysia in the lurch.

After the fall of Sukarno, relations between Indonesia and Malaysia were restored under President Suharto, as both parties agreed to normalize the bilateral relationship and pursued peaceful co-operation and partnership. However, the setback did not stop China short of continuing the confrontation. Its diplomatic offence against Malaysia continued with the same vigour.

China welcomed the establishment of the “Permanent Mission of the Malayan National” (MNLL) in Beijing on January 12, 1966. MNLL sought to carry forward Sukarno’s “Crush Malaysia” campaign. Additionally, China also started accusing the west and Soviets of pressuring the Indonesian military and government to accept the Federation of Malaysia.

Malaysia and Indonesia shares hostilities and disputes, even today:

Make no mistake, various cultural and even boundary conflicts between Malaysia and Indonesia still exist, which provides China with an opportunity to cash in upon those differences. Currently, both nations are at odds over the oil-rich islands of Ambalat. Previously, they had locked their horns over the islands of Ligitan and Sipadan, which were later won by Malaysia.

The recent past has even seen the cultural differences between the two states. Disputes over the origins of a variety of dishes found in both countries is also a perpetual issue, from ‘rendang’ to ‘lumpia’ (known as ‘popiah’ in Malaysia) or even dishes as simple as ‘nasi goreng’ and ‘pisang goreng’.

And inconsolably, the bilateral disputes conveniently provide China a stick to beat both countries with. China, riding high on the faultiness between two countries, often gets to make the most out of regional boundary conflicts. Today, China is the top economic partner of both Malaysia and Indonesia, thus making them excessively reliant on Chinese partnership, and rendering them politically neutered to stand up against Chinese belligerence.

Today, Malaysia’s stance against Chinese hegemonic ambitions in the south China sea is quite confrontational, with Malaysia currently drilling in the contested waters, despite China’s objections. On the other hand, Indonesia is not drilling in any sensitive zone. Indonesia chooses to avoid confrontation by enduring Chinese hostilities.

Also read: Maphilindo: A failed experiment of the 60s but the need of hour today to stop China

How China cashes in upon differences between Jakarta and Kuala Lumpur:

Experts believe that Indonesia’s maritime disputes against Malaysia have prevented Jakarta from devising a clear China policy. South China Morning Post quotes Zachary Abuza, Professor of southeast Asia studies at the Washington-based National War College, as saying that “Indonesian President Joko Widodo appeared to have one policy while his coordinating minister for maritime affairs had another. The Armed Forces had yet another policy, which in turn differed to that of the navy. Indonesia’s response is all over the place, and China takes advantage of that.”

The shared tensions have led both Malaysia and Indonesia to focus more on the land-based armed forces, a primary reason behind the resource crunch of the two navies. This also helps China in a great degree, which finds itself in a better position to carry out intimidating activities even in the Exclusive Economic Zones of the two countries.

Without the rising China threat, southeast Asia would have been a much peaceful and prosperous region. What stands in the way of southeast Asia becoming a deterrent to the Chinese menace is a lack of consensus among ASEAN and bilateral disputes between countries like Malaysia and Indonesia.