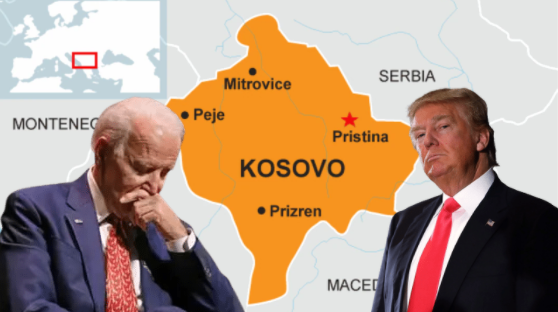 Joe Biden has failed as the President of the United States of America. He is not fit for the White House. His approval ratings are nosediving and confidence in his administration has plummeted. Biden has been trying to instigate violence across the world – be it in the Horn of Africa, the Middle East or between Ukraine and Russia. And now, he has been exposed by Donald Trump. It seems the only countries with which Biden wants peace are Iran and China – both of whom happen to be the United States’ top enemies. If that is not a statement of Biden’s cowardice, then we don’t know what is.

Apparently, not only has Biden been trying to stoke conflicts around the world, but he is also stalling the implementation of peace agreements between Serbia and Kosovo – which were mediated by Donald Trump last year. In September 2020, Donald Trump did the unthinkable, as he brought together two enemy nations of Serbia and Kosovo and made them agree to establish economic ties, allow airspace access to each other and run train services between them. With Trump out of office, and Joe Biden being made in charge, all hopes of a Serbia-Kosovo reconciliation have been dashed.

Trump Storms Back to Ensure Serbia and Kosovo Make Peace

Donald Trump might not be the President of the United States right now, but that does not mean he is out of the scene completely. Trump has started doing foreign policy himself, and he even has envoys to take his causes around the world. This is a major snub to the White House and Joe Biden, both of whom have been sleeping their bottoms off when it comes to restoring global peace.

In a statement on Thursday, Donald Trump said, “The great people of Serbia and Kosovo have overcome tremendous obstacles in their pursuit of economic normalisation. The agreements my administration brokered (in Washington, on 4 September, 2020) are historic and should not be abandoned, many lives are at stake.” He added, “Today, my envoy Ambassador Ric Grenell visited the Kosovo-Serbia border to highlight this important agreement. Just like we proved in the Middle East with the Abraham Accords, peace and economic normalisation is possible, but it takes a sincere effort and unwavering leadership. Peace is possible, don’t give up – long term prosperity for those two nations is at stake!”

Read more: Sworn enemies Kosovo and Serbia have almost patched up. Thanks to Trump

Richard Grenell is a former US ambassador to Germany, special envoy to the region, and a staunch Trump partisan. He was deputed by Trump recently to ensure that Serbia and Kosovo make progress with the agreements that Trump has mediated last year. Donald Trump’s parallel diplomacy efforts, meanwhile, have sent the White House in a tizzy.

In his statement, Trump referred to Grenell as “my envoy” – a reference that drew criticism from the White House. According to a senior White House source quoted by Bloomberg, “Donald Trump is no longer President and doesn’t have any ‘envoy ambassadors’ representing the United States.”

During his visit to the Serbia-Kosovo border, Grenell said, “I come here because we are frustrated. Former Trump administration officials and many American people are frustrated because we saw the historic economic agreement, four economic agreement that were negotiated for the people of Kosovo and for the people of Serbia. This was not done for the government; this was not political. It was solely for economic development.”

Donald Trump is making sure that the progress his administration made in ensuring peace between Serbia and Kosovo is not allowed to die a cold death during Joe Biden’s tenure as President. So, he is keeping efforts to make further progress between the two countries.

The Serbia-Kosovo dispute is rooted in historic tensions between Kosovo’s Albanian and Serb communities that had ultimately led to the Kosovo war in 1998 and 1999. The US and the European Union have both been in favour of an independent and sovereign Kosovo. Led by the United States, NATO had bombed Serbian military targets for 78 days starting March 24, 1999. On the other hand, Russia has been the dominant influence in Serbia, due to historical and cultural reasons. And Moscow has traditionally remained a key supporter of Belgrade over the Kosovo issue.

Finally, in 2008, the Muslim-majority State of Kosovo declared independence from Serbia. But Kosovo today remains a partially recognised State only. 97 out of 193 countries in the world recognise Kosovo as an independent, sovereign country. Serbia has, of course, refused to recognise it as a sovereign state. It is not recognised by several powers such as India, China, Russia and Brazil.

The Serbia and Kosovo conflict was considered as one which was simply too hot to handle. No world leader, except Trump, even tried brokering peace between the two sides. Trump was successful but was unfortunately forced out of office. But that is not stopping the man from doing the right thing, even though the same may outrage the wits out of the Biden administration.