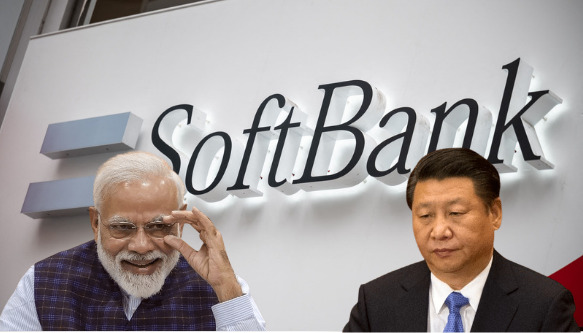 China’s crackdown against business enterprises from multiple domains seems to continue for a while. As things stand all those who were bullish on the ability of Beijing to bounce back are in panic mode trying to salvage their investments in China, which are in a free fall. One of the world’s most prolific investors who focus on tech firms, Masayoshi Son, founder and CEO of SoftBank has learnt his lessons the hard way. He is trying to make up for the humongous losses incurred by his vision fund among others. India looks like the opportunity for the same.

On 8th November, the conglomerate is stuck in a “big winter snowstorm.” SoftBank posted a loss of 397 billion yen ($3.5 billion) for the July-to-September quarter. Son said that the company’s net asset value fell by 6 trillion yen ($54.3 billion) to $187 billion. In this background, SoftBank Group is planning to make up for these losses and wants to further propel SoftBank into the profitable territory by investing in India’s first wave of startup IPOs. This wave began in July and is expected to continue until early next year.

According to estimates from Tracxn, a startup data tracker, the Tokyo-based company, two Vision Funds have invested approximately $11 billion in Indian startups, the public listings of financial services companies One97 Communications, known as Paytm, and PB Fintech, known as PolicyBazaar; logistics startup Delhivery; and hospitality company Oravel Stays, known as Oyo, will generate at least $7 billion in notional gains.

On Wednesday, the three-day subscription period for Paytm shares came to a close. Paytm is looking to raise 183 billion rupees ($2.48 billion) at a valuation of up to $20 billion. While Delhivery and Oyo are expected to list this year. In addition to this, as reported by Asia Nikkei, PolicyBazaar’s offering closed last week oversubscribed by 16 times, allowing the provider of insurance products to raise $750 million at a valuation of $6 billion.

According to Tracxn, SoftBank’s $3.35 billion investments in the firms, in which it has double-digit shares, are now worth nearly $10.6 billion. When Paytm goes public, its 18.5 per cent share is projected to be worth $3.7 billion. SoftBank owns PolicyBazaar shares at $942 million and Delhivery stock worth $1.4 billion. It invested $1.25 billion in Oyo for a 46.6 per cent stake, valued at $4.6 billion to $5.6 billion at Oyo’s $10 billion to $12 billion IPO valuation.

“If we find the right companies, we could invest $5 billion to $10 billion in 2022,” said Rajeev Misra, chief executive officer of SoftBank Investment Advisers. Japan Times has reported how investments in India have so far yielded better-than-expected results for the company. These statistics coming from investments in India have become a saviour for SoftBank, whose investments in China have been hit hard due to the stringent regulatory measures and even more extensive crackdown on any and every success story in the Tech domain. Needless to say, India is emerging as the top destination for investors fleeing China.

SoftBank’s China bet has failed royally, costing it a fortune

Over 20 years ago, Masayoshi Son invested $20 million in Alibaba, turning that bet into worth $60 billion when Alibaba went public in 2014. Since November last year, however, Alibaba has lost roughly $400 billion in market value. Alibaba’s share price fell 35% in the July-September quarter. Speaking about the massive $10.5 billion Vision Fund loss, Son said that Chinese firms, including ride-hailing giant Didi, played a major part in the poor performance of the fund.

Read more: SoftBank hit by $10 billion Vision Fund loss, a precursor to the fate of all the investors who are bullish on China

Essentially, SoftBank’s investments in China are turning sour and becoming liabilities. Why is that? Because Xi Jinping has launched a wide-ranging and unforgiving crackdown on all aspects of Chinese life. It just so happens that Softbank’s major investments are in the Chinese tech sector, and this is among those areas of the Chinese economy which has been beaten black and blue by the Chinese Communist Party over the past year. The CCP’s assault on businesses in China has led to investors fleeing the Communist nation. However, there were some – like SoftBank, who simply refused to read the writing on the wall, and ended up losing billions of dollars just because of their optimism regarding China.

Earlier this year, SoftBank Group Corp.’s attempts to sell Arm China Ltd. to Nvidia Corp and diversify its investments were blockaded by the CCP in a devious manner. Out of the blue, lawsuits aimed at holding Arm Ltd.’s controversial chief executive in power complicated SoftBank’s plan to sell the company to Nvidia. While then SoftBank was attempting diversification of its funds and increase the profitability of the existing investments, now it has realised that China has become a black hole for investors.

China is now a dark chapter in SoftBank’s history. And as the Chinese investments turn into sour grapes for SoftBank, it has become extremely bullish on India. Masayoshi Son said that the fund has plenty of “golden eggs” for this year, referring to a slew of companies from its portfolio that are planning to go public. SoftBank will benefit from the gains from the Indian IPOs, as it battles investor uncertainty about falling share prices. IPOs are critical to the Vision Funds’ business model because they allow them to profitably sell shares in their investments while keeping a portion of the revenues as a performance fee. The fact that SoftBank has decided to move away from China and invest in India, it will be able to recover its losses and come back in the share market’s green territory.