Eritrea is what Biden really wants, Ethiopia is just a pit-stop 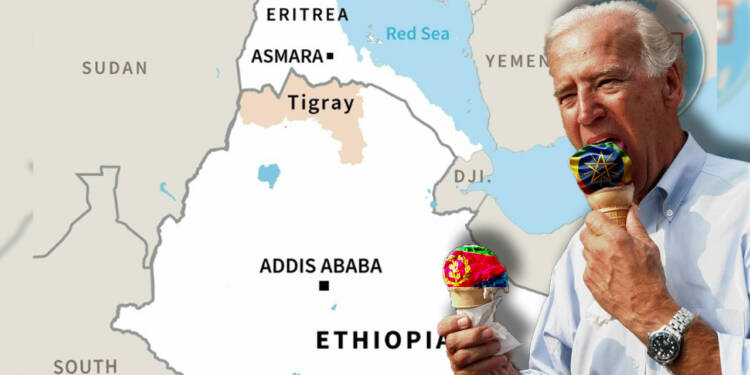 Ethiopia and Eritrea, being in close proximity to the Red Sea and Bab al-Mandab strait, are strategically located countries in the Horn of Africa region. Both nations share friendly relations under present governments, and that’s what driving the US’ urge to intervene in the region. The other factor behind the USA’s involvement in the region is its limited presence in the region.

Hence, banking on its blatant attempts to further destabilize the region, the US is hoping to ratchet up its connivance in the Horn of Africa. That explains why the US is now going all guns blazing against Eritrea after imposing sweeping sanctions on the Ethiopian government, which is battling the secessionist army of the US-backed Tigray People’s Liberation Front.

As we mentioned above, the friendly relations between Eritrea and Ethiopia are what stands in the way of the US becoming the most influential player in the region. So, the US went ahead with sanctioning the Eritrean army and the country’s ruling party for “contributing to the crisis and conflict” in Ethiopia.

“We condemn the continued role played by Eritrean actors who are contributing to the violence in northern Ethiopia, which has undermined the stability and integrity of the state and resulted in a humanitarian disaster,” Director of the Office of Foreign Assets Control Andrea M Gacki said in the statement.

All in all, the Eritrean Army’s involvement in Ethiopia’s fight against US-backed TPLF is what prompting the USA’s sanctions against Asmara. This is a clear indication of the USA’s hidden agenda of driving a wedge through the friendly Ethiopia-Eritrea relations.

Why is the US rattled on Eritrea?

In April this year, Eritrea had formally acknowledged its military involvement in the country. Ethiopia is fighting TPLF forces to rein in its ambitions of carving out another sovereign out of Ethiopia’s territories under its Prime Minister Abiy Ahmed. The US fully backs TPLF forces and has so far imposed hefty sanctions on Ethiopia.

But Ethiopia is not alone in fighting out the Tigray forces. TPLF is a shared enemy of both Ethiopia and Eritrea. Eritrea and TPLF have had even fought a war back in 1998 when Ethiopia used to be ruled by TPLF. TPLF governed the country till 2018, and relations between both the countries remained strained till the current Prime Minister Abiy Ahmed was not in the office.

Read More: To understand the Ethiopian war, one must understand Eritrea

With Abiy Ahmed’s blistering streak to the helm of the affairs in Ethiopia, relations between Eritrea and Ethiopia again became friendly nations. He replaced the TPLF and also and got the Eritrean-Ethiopia peace deal concluded, for which Ahmed was given the Nobel Peace Prize. He even promised to accept the 2002 boundary commission, which got vehemently welcomed by Eritrea.

Therefore, when TPLF went to war with Ethiopia, Eritrea decided to back Ethiopia and sent in its troops. This was also a result of Eritrea’s history of betrayal with the TPLF and a desire to consolidate its position in the region. The TPLF, on the other hand, is not backing off because of its ultra-nationalist ideology. For years, TPLF has evoked sentiment of ultranationalism and ethnic pride combined with a false notion of victimhood amongst the Tigray people. TPLF thus effectively gets reduced into a militant group perpetually in war to ‘protect’ its people.

What does the USA want by debilitating ties between Eritrea and Ethiopia?

The USA is now making Eritrea’s involvement in Ethiopia a point to set a foothold in the region. The US has its reasons to do what it is doing. The US has a very limited presence in the Horn of Africa, a strategically crucial region that offers access to Yemen, the Gulf of Aden, and the Red Sea, apart from serving as the source of the River Nile

The US is fast losing ground to its rival Russia in the region. Russia has become a major arms supplier to the region, while China has become a leading investor. Saudi Arabia and the UAE too are enjoying close ties with the Horn of Africa nations. Also, Eritrea seems to be firmly in control of its leader Isaias, who is a long-time dictator.

Similarly, Ethiopians back their leader Abiy Ahmed who saved the country from civil war and is introducing staggering reforms to tackle ethnic conflict and the Christian-Muslim divide in Ethiopia. Meanwhile, regional conflicts are also dying down with Eritrea’s leader Isaias normalizing ties with Somalia and Ethiopia.

Read More: Ethiopia enters endgame as the US goes all out to destabilise it

Isaias is also looking to mediate the Nile dam dispute between Egypt, Ethiopia, and Sudan. Eritrea’s efforts thus threaten to side-line the US. As the Horn of Africa embraces an era of peace and prosperity, and Ethiopia and Eritrea marginalize the TPLF, the US is getting nervous, and Biden is increasingly trying to drum up support for the TPLF.

Hence, the US’ anxiety and unnerving are understandable. If the US manages to stymie Eritrea’s efforts to usher in an era of peace in the region, it will help the US shore up its stakes in the Red Sea and the region around the Bab al-Mandab strait. Unlike Ethiopia, Eritrea shares its border with the vital trade route between Asia and Europe; hence the US is striving to take Eritrea back in its influence by further destabilizing the region.

Is the US all set to get a new Vice President?