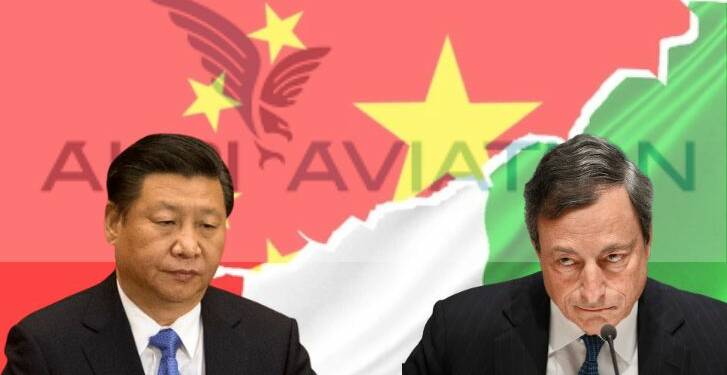 Italy, in recent times, has emerged as a country that is in no mood to take Chinese excesses lying down. To be fair, China managed to hide its misdeeds for at least three years. But now that it has been caught, its fortunes in Italy are in peril. It has lost the confidence of Italy, which was, in any case, growing uneasy with Chinese interests in its territory. If one observes, Italy has been taking constructive steps to counter China. Whether it be Italy’s Lavazza Espresso brand making an entry into Chinese markets, or Rome going all-out in its efforts to secure a semiconductor manufacturing facility for itself by the end of this year – the country has been strategically trying to hurt Beijing’s interests for quite some time now.

China overstepped this time. Imagine this – you develop a product. You have a copyright over the product. But a thief with significant muscle power manages to illegally get hold of your product design and technology. How would you feel? Most definitely, you’d like to land a solid punch on the thief’s face. China is the thief, and in 2018, it set in motion a plan to usurp Italy’s drone technology. Now, Rome is livid, and it is going all-out against Beijing.

On Monday, the Wall Street Journal reported two Chinese state firms took control of an Italian military drone maker more than three years ago via an offshore company — without the knowledge of authorities in Italy and Europe. The shell company through which the sale was made, called Mars (HK) Information Technology, in July 2018 bought a 75% stake in Italian drone maker Alpi Aviation for 4 million euros, or $4.6 million. Additionally, Mars invested an unnatural amount of 1.5 million euros in Alpi — an amount Italian police said was a significant overpayment.

It then turned out that Mars was a shell company linked to two Chinese state-controlled firms – China Railway Rolling Stock Corp or CRRC — a large Chinese state-owned rail company — and an investment group controlled by the Wuxi municipal government. Therefore, it would suffice to say that the CCP made the deal to illegally obtain drone technology from Italy and begin production within China. The Journal has reported that Mars (HK) Information Technology has already started the process of transferring Alpi’s technical and intellectual property to a new production site in China.

Now, according to Reuters, Rome has opened an inquiry into the 2018 sale of a 75% stake in Alpi Aviation, to see whether it should have been notified about the transaction under the golden power regulations for strategically important assets. Three sources directly involved in the case told Reuters the Italian government is preparing a formal notice to be sent to all involved parties asking for clarifications. This is a formality Rome must complete before invalidating the sale in toto on grounds of national security.

The Golden Power is the special power of the Italian government to limit or stop foreign direct investments and corporate transactions involving Italian strategic assets. The sectors in which the Italian government can intervene and use these powers are defence, national security, infrastructure, high technology, fintech, insurance, and others.

Golden Powers Wielded Most Against China

Since they came into being in 2012, the Golden Powers of the Italian government has been brought into use four times. The best part is that these powers were invoked by Rome three times to ward off Chinese deals. Out of the four times that the powers have been used since 2012, two have been since Drgahi’s government took office nine months ago. This is an indication of how the government of Italian Prime Minister Mario Draghi is using its special powers to counter a predatory China.

Read more: In a major jolt to China, Italy puts its Belt and Road projects on an indefinite hold

In June, Mario Draghi said during the G-7 summit in Britain that China’s expansionist “Belt and Road plan” will be thoroughly scrutinised. He minced no words while taking down China, and said, “It’s an autocracy that does not adhere to multilateral rules and does not share the same vision of the world that the democracies have…We need to cooperate but we also need to be frank about things that we do not share and do not accept. The U.S. president said that silence is complicity.”

Italy is set to kick China out of yet another shady deal that Beijing made with a company of national importance to Rome. Here on, ties between the two countries are expected to go for a nosedive. More and more countries are finally realising the risks that come along with mere association with Communist China.