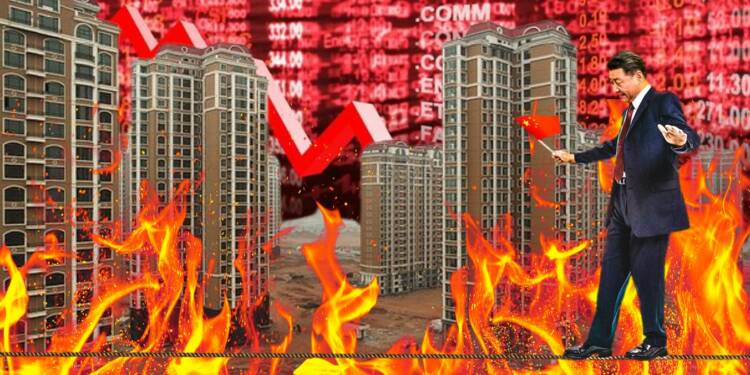 We at TFI Global have been saying this for quite some time now – China has got rich but it is hardly as rich as it claims to be. The latest Bloomberg report has revealed how much of Chinese wealth could get evaporated due to artificially high real estate prices.

A dramatic rise in Chinese wealth over the past twenty years:

Chinese wealth has skyrocketed over the past two decades. While net worth worldwide rose to $514 trillion in 2020 from $156 trillion in 2000. China is the main power driving this rise in global wealth and has accounted for almost one-third of the increase.

According to a report by the research arm of consultants McKinsey & Co. which examines the national balance sheets of ten countries representing over 60% of the global wealth, Chinese wealth went up to $120 trillion from a mere $7 trillion twenty years ago. In 2001, China joined the World Trade Organization (WTO), which led to a spectacular increase in Chinese economic growth.

Effectively, China has overtaken the United States of America in terms of net wealth and has grabbed the top spot in the world. Yet, in both the US and China, the distribution of wealth remains highly unequal. The richest 10% of the households in the two biggest world economies hold two-thirds of the total wealth and their share is increasing even further.

How the ongoing real estate crisis can evaporate Chinese wealth:

The Chinese ascent has however been powered by widespread speculation in its property market and surging real estate prices backed by heavy debt provided by Chinese financial institutions for unsustainable projects. On the other hand, the United States of America has not witnessed such spectacular growth in its real estate market. Lukewarm increases in real estate prices in the US saw its net worth double over the last twenty years to $90 trillion.

In fact, the steep rise in global wealth itself is attributed to real estate development. As per McKinsey, 68% of global net worth is stored in real estate. The balance wealth is stored in other sectors like infrastructure, machinery and equipment, and intangibles like intellectual property and patents.

As per McKinsey, the dramatic growth in net worth over the past twenty years has outpaced the steep rise in global Gross Domestic Product (GDP). The mismatch is being attributed to ballooning property prices encouraged incessantly by declining interest rates. As a result, asset prices are around 50% higher than their long-run average relative to income. This means that the ongoing wealth boom isn’t really sustainable in character.

Let us tell you what it means. Your net worth is estimated in terms of the liquid and fixed assets that you own. Now, if most of your wealth is stored in property assets, then any knee-jerk reactions in the real estate market could evaporate most of your wealth. This is exactly what is bound to happen in China’s case too.

The ballooning real estate prices, low-interest rates and high debt in the global markets are bound to reinvent the horrors of the 2008 global financial crisis. A housing price crash in 2008 and the collapse of Lehman Brothers in the United States had led to a contagion effect destroying the American and global financial markets.

This time around China is going through a similar turmoil. The China Evergrande Group was, of course, the first one to go down. The Chinese real estate giant is suffering under more than $300 billion in debt and Evergrande’s downfall has led to a broad crisis in the Chinese real estate market with many other firms like Modern Land China, Fantasia Holdings, Sinic Holdings, and China Properties too defaulting on debt repayments.

Read More: ‘Don’t invest in China,’ Evergrande sends a beautiful message to investors all over the world

The Chinese real estate turmoil means that the Chinese financial markets that were already ridden with unsustainable debt are facing even more pressure because the overstretched real estate sector is further straining leading private firms, State-owned enterprises and regional banks.

From a Chinese perspective, the real estate sector becomes a critical driver of economic growth and prosperity. The Communist nation has traditionally relied on the real estate market for its economic development, fuelling wealth generation and improving investor sentiment. Even when the Chinese economy was confronted with sluggish growth or the stock markets tumbled, Beijing relied on real estate development to stimulate growth.

However, the Chinese real estate sector is now well past its saturation levels. The housing bubble of China is set to burst as 65 million apartments in the country are empty, which is also why a property giant like Evergrande Group has landed in a precarious situation.

Ultimately, most of the Chinese wealth stored in real estate is bound to get eroded. We are actually talking about the impoverishment of the world’s second-largest economy as Beijing seems set to lose a lion’s share of its wealth amidst the ongoing turmoil.