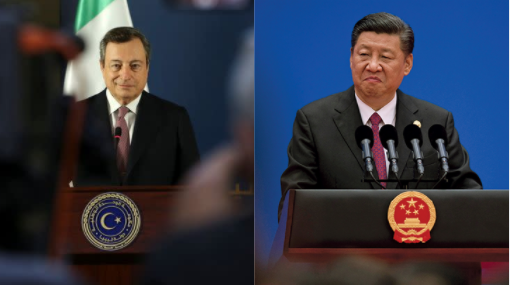 Italian Prime Minister Mario Draghi said during the G-7 summit in Britain on Sunday (June 13) that China’s expansionist “Belt and Road plan” will be thoroughly scrutinised. It should be noted that, in order to revitalise its economy, Italy approved China’s plan in 2019.

While speaking about China, Draghi emphasised, “It’s an autocracy that does not adhere to multilateral rules and does not share the same vision of the world that the democracies have…We need to cooperate but we also need to be frank about things that we do not share and do not accept. The U.S. president said that silence is complicity.”

While Italy’s participation in China’s expansionist programme was not discussed during the G7, the agreement would be thoroughly examined, according to the Italian Prime Minister. During the summit, the G7 countries provided assistance to poorer countries in order to oppose China’s Belt and Road Initiative. Italy was a proponent of China’s stance before Mario Draghi’s inauguration as Prime Minister.

The United States, together with other G7 partners, has suggested a new global infrastructure programme called Build Back Better World (B3W) to counter China’s Belt and Road Initiative’s expanding impact. A US official said, “This is not just about confronting or taking on China. But until now we haven’t offered a positive alternative that reflects our values, our standards, and our way of doing business.”

In a post-summit declaration that chastised Beijing on topics ranging from human rights to the origins of the coronavirus, Draghi also said the Group of Seven countries had to be candid about disparities between the West and China.

Hitting back at the world’s richest democracies that are desperately looking for a blueprint to take on Beijing, a spokesperson for the Chinese embassy in London said, “The days when global decisions were dictated by a small group of countries are long gone…We always believe that countries, big or small, strong or weak, poor or rich, are equals, and that world affairs should be handled through consultation by all countries.”

The G7 leaders — the United States, Canada, the United Kingdom, Germany, Italy, France, and Japan – are currently meeting in the English seaside town of Carbis Bay to demonstrate to the world that the world’s richest democracies can provide an alternative to China’s expanding dominance. The G7 has also further taken a united stance against China has definitely sent alarm bells ringing in Beijing and with Italy now scrutinizing the Chinese BRI, it could be very soon that China bids adieu to its BRI projects in Italy as well.

Do not interfere with the post-election audit or you’ll go to jail. Arizona state senator warns the US attorney general trying to stall the audit