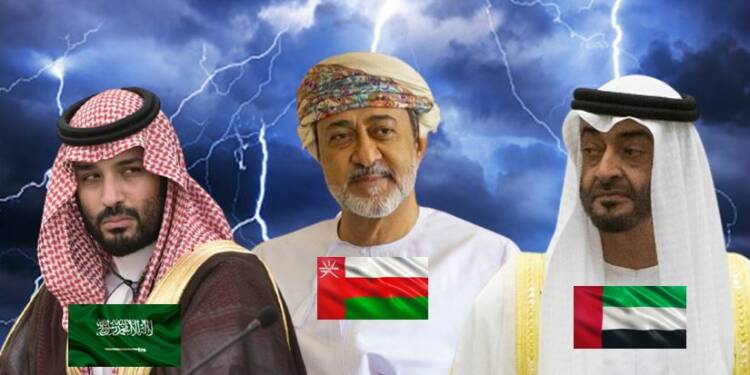 Every country is focused on maximising its interests which are in line with the country’s primary objectives in a certain time span. And the current realignment of alliances in the Middle East region has made smaller yet strategically placed countries reassess their interests and the best possible approach to achieve the same. In the season of UAE-Saudi Arabia rivalry, a cash-strapped Oman is attempting its own leap of faith, as it intends to utilize its strategically located ports and container terminals to expand its logistics sector. Oman wants to carve its own space in the shipping and logistics sector, hoping to serve as a prime gateway to Gulf markets.

The UAE does accept Saudi leadership of the Muslim world, but the Emiratis are themselves growing into a big regional powerhouse which unnerves the Saudis. Now, in order to level things out, Saudi Arabia is looking to lure foreign capital and talent from places like the UAE. Oman could turn the nascent Saudi Arabia-UAE economic competition into an opportunity.

Also read: Forget Saudi Arabia, move over Iran and ignore Turkey – The UAE is the king of the Muslim World

In July 2021, Saudi Arabia changed its import rules to exclude items produced in Gulf free zones from intra-GCC preferential tariff concessions, a major driver of the economy for the UAE. A Saudi delegation led by Investment Minister Khalid al-Falih visited Oman a month later to look into investment prospects and expressed interest in developing economic ties.

In recent years, you won’t get to see any visible friction in the UAE-Saudi ties. The UAE seems to work under the broader umbrella of the Saudi leadership, but still, some issues persist. The UAE has been getting really competitive and moving ahead quickly, while Saudi Arabia lags behind. The UAE has progressively reshaped its economy.

Also read: Brothers in arms? Saudi Arabia and UAE fight it out for greatness

On the diplomatic front too, the UAE was quick to evolve. Last year, it signed the Abraham Accord and normalized relations with Israel. Saudi Arabia, on the other hand, had no choice but to approve the development because of American involvement. By signing the Abraham Accord, however, the UAE ensured that it became a leading American security partner in the Middle East. It also got hold of the most modern American fighter aircraft- the F-35, before Saudi Arabia.

Over the past few years, the UAE has already been involved in military campaigns in Libya, Yemen and Syria, which brings it very close to the US. The UAE did show one small sign of challenging Saudi leadership earlier this year, when it challenged a Saudi-led deal at a meeting of OPEC+ to raise production beyond the limit set for early next year. The UAE blocked the agreement, described it as “unfair”, and demanded a rise in its own production.

Saudi Arabia’s Oman option and an opportunity for Oman to diversify its economy:

As Oman’s crude oil reserves dwindle at current production levels, reserves could be depleted in the next 25 to 30 years, the country is focusing on five sectors, including logistics, to re-energize its economy and diversify government revenue, which currently accounts for 40% of government revenue. By 2040, Oman’s logistics sector could employ 300,000 people, as it capitalises on its strategic location at the crossroads of global maritime lines to become the Gulf’s gateway. Oman ruled over a massive maritime trading empire that spanned most of the western Indian Ocean for centuries.

Oman’s location outside of the Strait of Hormuz is now one of its strategic assets. The UAE, the Gulf‘s current logistics superpower, is connected to the rest of the globe through this small strait. In addition to this, Oman maintains cordial relations with the Islamic Republic of Iran, with which, it shares the Strait of Hormuz. “Oman might function as a logistic hub for the area, rather than a market in and of itself,” said Mahmood Al-Wahaibi, an urban planning specialist who worked for the Oman National Spatial Strategy from September 2016 to September 2021.

Oman’s aim to be the Gulf’s entrance point clashes with the UAE’s logistical dominance. DP World, an Emirati port operator, moves roughly one out of every ten containers in the world. It owns and operates ports, terminals, free zones, and logistical hubs on six continents, including its flagship Jebel Ali Port in Dubai, which contributes to about a quarter of the emirate’s GDP. The current diplomatic and economic competition between the UAE and Saudi Arabia has provided Oman a once in a lifetime opportunity to capitalise on the situation and attract Saudi Arabian investments as well as companies, to utilize Oman’s ports.