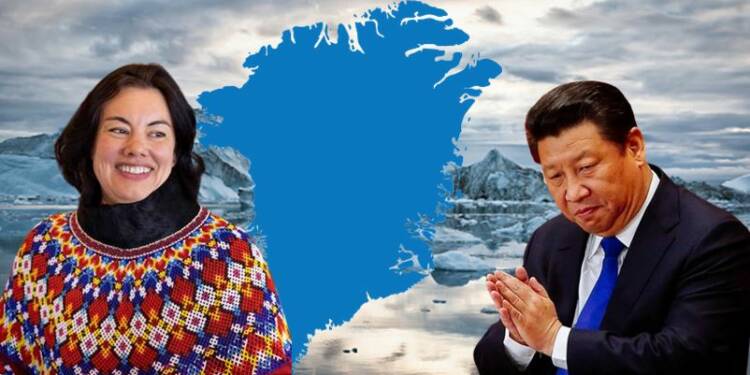 The last time Greenland hit the headlines was when former US President Donald Trump had floated the idea of buying the world’s largest island, an autonomous territory within the Danish realm. It was a manifestation of the growing geopolitical importance of the territory.

China, which ostentatiously calls itself a “near Arctic” nation, has also been eyeing the vast ice-capped swathes of Greenland. However, a communist country that has no qualms in tossing around business norms and sacrificing nature to meet its own commercial interests, has now been shown the door by the island’s new government.

Reuters reported on Tuesday that Greenland has stripped a Chinese mining company of its license to an iron ore deposit near the capital Nuuk, dealing a huge blow to attempts by Chinese companies to gain a foothold on the resource-rich Arctic island.

Climate change has tamed the deadly winters in and around the Arctic, making the resource-rich territory more accessible and mining operations in the region, more lucrative. In 2015, China’s coal and iron ore importer, General Nice, had become the first Chinese company to set its foothold in the region by taking over the Isua mine project, previously owned by London Mining.

The government is also requiring the soon-to-exit Chinese company to submit all the geopolitical data collected during years of operations, deposit remaining payments of 1.5 million Danish crowns, and clean up the mining area.

Back to back setbacks for China in Greenland:

With the new government at the helm after April this year, Greenland has made it a priority to support environmentally responsible mining.

This year alone, the new government has banned uranium mining in the region, effectively halting the development of the Kuannersuit mine, one of the world’s biggest rare earth deposits, which is partly owned by a Chinese company.

Several Chinese companies have attempted to make inroads in the highly sought-after island territory; however, it has hardly gained any success in its pursuit. In 2016, for instance, General Nice had also attempted to buy an abandoned naval station in Greenland from Denmark, but Copenhagen vetoed the offer because of security concerns.

Similarly, in 2018, Greenland rejected an offer from a Chinese state bank and a state-owned construction company to finance and build two airports in Greenland

Why is China eyeing Greenland?

China’s repeated attempts to cement itself as a key player in the region have yielded no results so far; however, lay bare the geopolitical importance of the region. Greenland’s strategic importance is tightly tied to the opening up of new North Atlantic shipping channels helped by melting polar ice caps. The new lanes have drastically reduced the trade travel times to circumnavigate the globe, which usually involves passing through the Panama or Suez canals.

China, which cherishes ambitions of developing a “Polar Silk Road” through North Atlantic shipping lanes, has made it a foreign policy agenda to get the island under its sway. A Pentagon report in 2019 had warned that “Denmark has publicly expressed concern about China’s interest in Greenland.”

“Civilian research could support a strengthened Chinese military presence in the Arctic Ocean, which could include deploying submarines to the region as a deterrent against nuclear attacks,” the report had said.

How China’s presence in Greenland is a threat to the US?

China’s ambitions of taking over mining operations and infrastructural projects in Greenland also pose a major threat to the US armed forces stationed in the region. Since World War II, the United States and Greenland have had an arrangement to house American military assets on the island. Thule Air Base in Greenland, America’s northernmost Air Force base, has been operational since 1943, and is equipped with a ballistic missile early warning system as well as a satellite tracking system.

So, in the face of heightened cold-war like tensions between China and the US, Denmark’s move to chase out Chinese mining companies from Greenland holds extreme importance for the democratic world. Even countries like Russia have shown reluctance in welcoming Chinese involvement in the region, and now Denmark’s move to ostracize China in the Arctic are sure to make Chinese dreams go up in smoke.