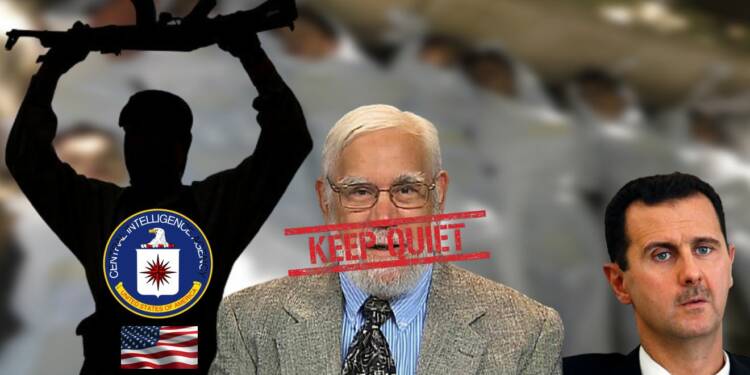 The story of Syria and Bashar Al-Assad has started to take a new turn, with the governments in Egypt, UAE and Israel working at different levels to bring Syria back into the political mainstream in the Middle East.  Now, the latest revelations by Theodore Postol, one of the world’s leading authorities on warfare and weaponry, have shed light on how the chemical weapons attacks in Syria were not conducted by the Assad regime, but by CIA trained Jihadists. If true, it is quite reminiscent of how the USA used the Taliban to remove USSR from Afghanistan. However, speaking the truth comes at a price, as the scientist was cancelled.

Professor Postol, who also served on the senior editorial board of the Princeton-based Science & Global Security journal for nearly 30 years, resigned in protest of the journal’s reluctance to publish a piece he produced that embarrassed the CIA and the US government. The article revealed irrefutable proof that on April 4, 2017, the sarin gas attack on Syrian civilians was a false-flag operation carried out by US-funded jihadists to make it appear as if Assad was to blame.

Revealed the truth and got cancelled as a consequence:

To prevent Professor Postol’s article from being published, a campaign of character assassination was launched against him in order to damage his reputation and ruin his credibility. Select members of the scientific and academic community—who had long suckled at the government teat and thus obediently ganged up on their former colleague with defamatory articles and scandalous letters circulated behind his back—put pressure on the journal’s editors (many of whom Postol had mentored) to refuse the article. Surprisingly, Gregory D. Koblentz, a fellow of the Council on Foreign Relations (CFR), compared Postol to a Holocaust denier in one of these letters.

Also read: After a decade-long war, the West finally surrenders and Assad emerges as the giant slayer

Following the First Persian Gulf War in 1991, Postol wrote an article in Science & Global Security, disputing US government’s assertions regarding the Patriot missile defence system’s capability in intercepting Iraqi Scud missiles launched over Israel. Postol became a modest scientific celebrity with a good reputation for integrity as a result of the paper, which spurred a congressional probe. Until Postol spoke up, the Patriot missile system was praised for shooting down Iraqi Scuds after the Gulf War. Postol is still doing what he does best, deconstructing government myths with cutting-edge scientific study and analysis, some 30 years later.

However, as the political environment has shifted in the US, from being critical to the government to now sheepishly following whatever tonic the government shoves down people’s throats, he has been forced to shut up. Postol is now forced to undergo dishonest personal attacks in which he is characterised as a mental basket case, conspiracy theorist and a crank, in addition to not being able to get his findings published in top scientific publications.

As reported by the CovertAction Magzine, “Computational Forensics for the Alleged Syrian Sarin Chemical Attack on April 4, 2017: What Actually Happened?” he wrote alongside Goong Chen, a mathematician from Texas A&M University, and five other scientists. Modelled the crater that was identified as the source of sarin purportedly released at Khan Shaykhun, an al-Nusra front-controlled town in the Idlib province, using forensic computer simulations and three-dimensional picture analysis.

The crater and accompanying pieces were probably certainly created by a vehicle-launched improvised rocket-propelled artillery round with a high-explosive warhead—which the rebels could have possessed—rather than an aerial bomb from a Syrian plane, according to Postol and his co-authors. There were no fragments typical of an aerial bomb, such as tail fins, and the crater was too small to be generated by a bomb. This conclusion, which was validated by a senior intelligence source with experience analysing bomb damage, cast doubt on the attack scenario outlined by the US intelligence community and the Joint Investigative Mechanism of the Organization for the Prohibition of Chemical Weapons (OPCW) (JIM).

However, as the partisan interests and the policy choice of the deep state, as well as the military-industrial complex, remains supreme, the report had to be shut down and the dangerous scholar who brings out the truth was needed to be cancelled.