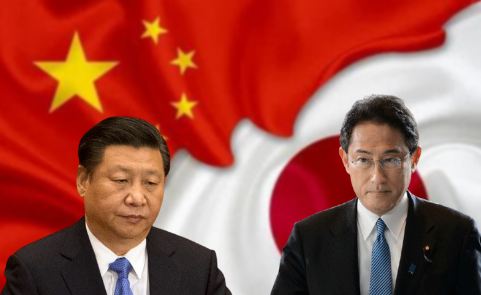 Entangled in the World War 2 era pacifist constitution, Japan is increasingly realizing the fact that its abilities to counter the rising security threats stemming from China and North Korea are extremely limited. So, Japan seems to be following the maxim that “attack is the best form of defense”, as Japanese PM now hints at developing capabilities to strike the enemy bases in the face of an imminent missile attack.

Currently, Japanese territories are shielded by two-tiered defence apparatus, designed to destroy only those missiles that don’t change their trajectory after being launched. While outside the atmosphere, an attacking missile is shot down by the sea-based Aegis missile shield. If the missile manages to re-enter the atmosphere, then Japanese Self Defense Forces use Patriot Advanced Capability-3 missiles to eliminate the flying threat.

But both China and North Korea are now developing missiles that can change their trajectories even after being fired, complicating defence deliberations in Tokyo. The new missiles would be harder to track, that too with lesser accuracy.

Japanese Prime Minister Fumio Kishida on Saturday highlighted Japan’s complexities in front of 800 SDF troops at Asaka camp. He said, “To strengthen defense capacity, we will not rule out options such as having enemy base strike capabilities”, adding that he has already ordered a review of Japan’s Medium Term Defense Program as well as its national security and defence guidelines.

Make no mistake, Japan is only allowed to engage in defensive military activities under its pacifist constitution. However, the Kishida administration may empower its SDF troops to undertake pre-emptive missile strikes on enemy bases once it has been determined that Japan is being attacked.

Under similar provisions, Japan had earlier empowered its SDF coast guard to have strike-first capabilities if a foreign vessel intrudes into the Senkaku Islands.

It is interesting to note the ritual of re-interpreting the binding norms of Article 9 by successive administrations in Japan. Through reinterpretations and tweaking the definitions and scope of defensive activities, Japan is making sure to fortify its territories without exceeding the law of the land.

Kishida’s signals of developing pre-emptive strike capabilities also muddle China’s Taiwan-unification ambitions. That’s because Japan has vowed to link the issue of Taiwan’s sovereignty to its national security. And to deter China from laying siege on the island nation, Japan may very well choose to respond with missile strikes on China’s attacking naval bases.

This development reinforces the Kishida administration’s resolve to red-ink the pacific constitution. Japanese voters have now woken up to the burgeoning threat emanating from China. The rise of the right in Japan perfectly embodies their realization. Conservative parties now hold 345 seats in the 465-seat strong lower house of the parliament, thus making it easier for Kishida to set in motion the historic move of revising Japan’s pacifist constitution.

Read More: All hail the Samurais – Japan is changing its pacifist constitution, finally

Japan prepares for a war

Japan’s defence budget is going up. Japan is rapidly militarizing its islands close to China. Interestingly, Japan is also looking more than willing to shoulder more costs for hosting the US troops stationed within its territories. Japan believes that shouldering more cost will help the country have a greater say in the management of the strategic assets of the nation.

Japan doesn’t want to be caught off guard even if it is left in the lurch by the US should Beijing wage an all-out war against Tokyo or Taiwan. So, it is now preparing for an all-out war against China, a war that would make Jinping meet the new realities of his life; a life full of humiliation, losses and embarrassment.