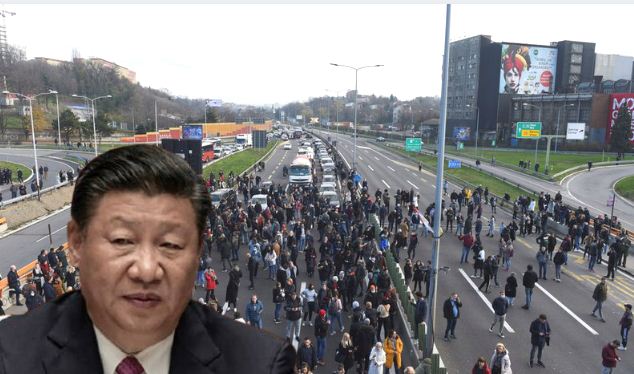 China has bought the Serbian government, or what can rather be called the dictatorial regime of President Aleksandar Vucic. The man has sold Serbia to China. Serbia shares a closer cultural affinity with Russia. However, it is also inkling to join the European Union. Simultaneously, the Vucic regime is in bed with China. China has pumped in billions of dollars into Serbia and has practically bought off the country. Chinese companies operate in Serbia and exploit their workforce and resources without any checks and balances. Beijing has been given a free hand by Belgrade to do as it pleases, but the people of Serbia are beginning to stand up to their government as well as China.

Hundreds of people on November 27 appeared simultaneously in the capital Belgrade, the northern city of Novi Sad and other locations to block main bridges and roads for one hour in what organizers described as a warning blockade. The Serbians were protesting against laws on property expropriation. The laws allow for swift expropriation of private property if deemed to be in the public interest. Activists argue this will pave the way for foreign companies to circumvent popular discontent over projects. Essentially, the laws passed by Serbia are aimed at squarely benefitting China.

China is also specifically targeting Vietnamese workers in Serbia. These workers are mostly trafficked and lured into Serbia with the promise of being shifted to European countries. However, upon arrival, their passports are seized by the Chinese and they are made to work as slaves at Chinese factories in Serbia. Now, these workers have decided to stand up to China’s blatant human rights abuses, and they are going to expose the dangers posed to Serbians by China.

In the small northern city of Zrenjanin, considered a centrepiece of Beijing-backed investment in Serbia, a Chinese tyre company called Linglong employs forced labour and uses them as slaves. The situation at the factory and the alleged deception used to lure employees has made headlines in Serbia after Nguyen and hundreds of other Vietnamese went on strike this week.

According to one such Vietnamese worker, “We are living as if we were in jail… all our passports were kept by the Chinese when we arrived at the airport.” On Friday, China forced the workers at the factory to sign a declaration under duress. The statement they signed said they had “voluntarily and consciously” agreed to work at the site. However, this is a brazen lie, as one of the workers at the factory said, “Everybody became anxious and scared, without knowing what the Chinese would do to us. We don’t want to work in the Chinese company. We want to leave. Please help us.”

The Serbian President is a shameless man. So, in response to the strike at the Chinese factory and the intimidation of Vietnamese workers therein, he said, “What do you want, to destroy an investment worth $900 million? If the Vietnamese need to be helped, we will help. But we will not chase the investors away.”

Aleksander Vucic said Chinese investments will continue to be a priority for him. During the early days of the Covid-19 pandemic, Vucic kissed the Chinese flag after receiving medical supplies sent by Beijing. Also, last year, Vucic said, China’s leader, Xi Jinping, is “not only a dear friend but a brother.”

Read more: China wants a prenup before marriage with Russia

While the government of Serbia has surrendered to China, the people are beginning to stand up against Beijing. Despite China buying out out the government, it has failed to impress the people of Serbia and bring them under its control. Serbians and foreigners alike are now beginning to push back against China. One will not be surprised to find out in the near future that the new anti-China protests are funded and supported by Russia, which would view the current discontent in Serbia as a golden opportunity to kick China out of the country for good.