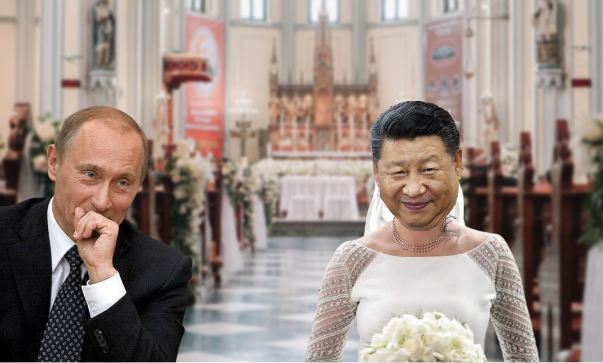 It is no secret that Russia is using China for its own needs. In fact, Russian President Vladimir Putin is playing a mighty game with China. In the short term, he is using China as an export market and is simultaneously also working towards expanding Russia’s influence around the world once again. Russia is well aware of China’s devilish designs to eat into its exclusive sphere of influence. China, meanwhile, is beginning to realise that Russia is treating it like a rag doll – with which Putin plays when he is bored.

China Wants Alliance with Russia to be Codified

China fears its axis of convenience with Russia, which is riddled with faultlines, could be shattered at any time, leaving Beijing exposed to a number of crises. Therefore, Xi Jinping is now pushing for a legislative agreement with Russia, which secures the partnership between the two countries forever. The head of China’s legislature has called for closer ties with Russia’s lawmaking bodies to lay a legal foundation for greater economic integration and political security.

Li Zhanshu, head of the National People’s Congress and a member of the seven-member strong Communist Party Politburo Standing Committee, said China and Russia should support each other’s core interests with legislation. According to the South China Morning Post, Li is the third most powerful man in the CCP and is a long-time protégé of President Xi Jinping.

According to Zhang Xin, who is an associate professor of international relations at Shanghai’s East China Normal University, China’spush for the formalisation of an alliance with Russia, especially in the economic realm, underlined Beijing’s impatience over the progress of ties with Moscow.

Interestingly, Li Zhanshu made a reference to the Cold War while calling on Russia to formalise its alliance with China. He said, “We must work closely within the international multilateral framework. We must resolutely oppose starting a new ‘cold war’, bullying and interference in domestic affairs.”

Why the Cold War Reference?

China wants a prenup with Russia for a variety of reasons. The most important among them, however, is avoiding a direct military confrontation with Moscow, as was seen during the Cold War. In 1969, Russia and China came to the brink of war, as the Sino-Soviet conflict escalated. The Sino-Soviet border conflict was a seven-month undeclared military conflict between the Soviet Union and China in 1969, following the Sino-Soviet split.

Read more: Russia could arm Vietnam with Nuclear Submarines and that will be catastrophic for China

China is scared. It wants a written agreement where the alliance between Russia and China is made a non-negotiable and non-redactable condition. This document would guide relations between the two countries for decades. Therefore, China would feel a sense of security and will be able to call Russia its official ally. However. Putin is not going to give in to such Chinese demands.

Russia kicked China out of Belarus. In the face of an import ban by China on Russian seafood, Moscow found markets around the world to export to. Moscow is also rubbing its copper independence on China’s face. In Southeast Asia, Russia has been arming China’s enemies. It is also India’s most important defence partner. Vladimir Putin, Russia’s president, is a realist. He wants to re-establish Russia as a powerhouse. The man is all too aware of Xi Jinping’s ambitions, which is why he will not commit to China like Jinping wants him to.