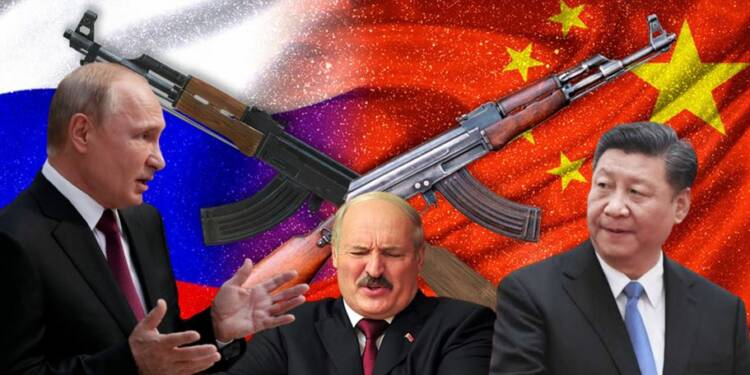 The stereotypical narrative spun is that of Russia and China being brothers in arms. Well, they are not. In fact, Russian President Vladimir Putin is playing a mighty game with China. In the short term, he is using China as an export market, but is also working towards expanding Russia’s influence around the world. As a matter of fact, a trade war is ongoing between China and Russia, and now, tensions between the two Asian giants have spilled over to Belarus.

Belarus is fast becoming the centre of geopolitical muscle flexing by the Russia-led bloc on one side, and the U.S.-led European Union on the other. China finds itself getting ground in Belarus, and Russia is making sure Beijing suffers great pain.

If Russia is to start a Soviet Union reunification, Belarus would be the first country it puts into its basket. Now many think of Belarus and Alexander Lukashenko as allies of Russia. Sure, they are. However, Lukashenko and Vladimir Putin do not exactly have a very rosy relationship. In fact, they have a rocky past. Belarus was rocked by massive street protests last year, which Russia instigated. Why did Moscow instigate protests against Alexander Lukashenko? Because the Belarusian leader had grown very close to China, and was allowing the communist nation to walk all over his country.

Also read: China could be the biggest casualty of the war-like tensions between Poland and Belarus

Belarus becoming a Chinese client state, or even a country which is heavily indebted to Beijing, would be a nightmare for Moscow. So, Putin instigated anti-Lukashenko protests in Belarus, and then helped the Belarusian leader get rid of them as well. In the process, he turned Alexander Lukashenko into a pro-Moscow leader, and made him dissociate from China.

What is happening now?

In 2015, during Xi Jinping’s visit to Belarus, the Chinese Development Bank agreed to provide Minsk with a $1.4 billion credit, guaranteed by the Belarusian government. Between 2000 and 2014, Minsk received more than $7.6 billion of Chinese financial support in the form of aid and loans. So, China was having a field day in Belarus. It was debt-trapping the country. Then, Vladimir Putin happened. And now, China has stopped transferring loans to Belarus and is also sacrificing a project which is vital for its own potassium supplies, but which is located in Belarus.

China has not paid yet another tranche of credit, amounting to $103 million, for the construction of the $2 billion Slavkaliy potash mining and processing plant in Lyuban, Belarus. The project has been stalled since June, and now, even subcontractors have begun leaving the construction site, dashing all hopes of an imminent revival. The Slavkaliy project is owned by the Russian oligarch Mikhail Gutseriyev, and this might be one of the reasons why China has stopped funding the project.

According to data from the PRC customs office, in 2020, Belarus sent 1.38 million tons of potassium chloride to China, which is 16% of total Chinese potassium chloride imports. China is currently reeling under a shortage of potash fertilizers. Yet, it seems to have stopped payments for the potash plant in Belarus. Needless to say, Beijing is very irked.

Also read: Belarus could soon be a part of Russia and there is a whole history behind it

Western and Belarusian media have reported that China is afraid of western sanctions, and that is why it is not going ahead with the loans. Western media has just been reading the lines, not between them. The reality is that China wanted to debt-trap Belarus as a whole, and turn it against Russia. That endeavour having failed due to Russian President Vladimir Putin’s intervention, China now has no interest to fund a potash factory in Belarus. Now that Minsk has fallen back in Moscow’s lap, Beijing is not willing to spend a single penny on it.

This underlines the massive fault lines between Russia and China. These two countries are not allies. They are not friends. They are enemies. Russia is all too aware of China’s devilish designs to eat into its exclusive sphere of influence. And China, having faced successive defeats, setbacks and humiliations, is now falling back.