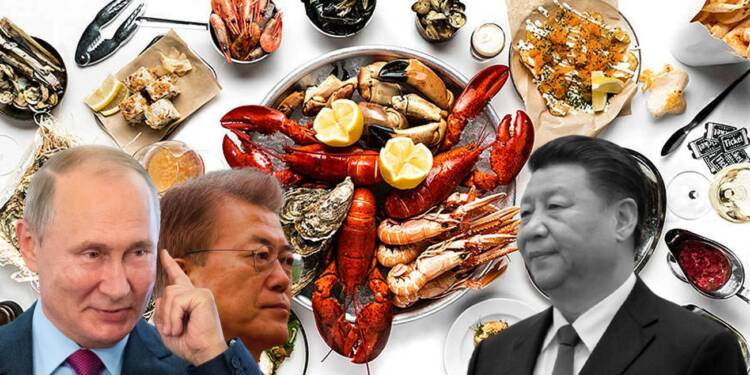 Did you know, a trade war is on between Russia and China? It has been for quite some time now. However, it is not part of daily news waves and intellectual conversations – because the stereotypical narrative spun is that of Russia and China being brothers in arms. Well, they are not. In fact, Russian President Vladimir Putin is playing a mighty game with China. In the short term, he is using China as an export market but is also working towards expanding Russia’s influence around the world. The very first signs of a growing acceptance of Russia by the world has come in the form of Moscow’s seafood exports to countries other than China recording historic highs.

Late last year, China had tightened its inspections and controls on imported seafood, after it claimed traces of COVID-19 had been found on the packing of imported seafood products. This was just an excuse of telling Moscow who the boss was, and also convince the world that Covid-19 did not originate in China. As a result of China’s decision to practically stop importing Russian seafood, Russian seafood shipments to China decreased 83 percent by volume in the first half of 2021 as compared to 2020. They also declined by half in total value. During the first half of 2021, Russia’s seafood exports totalled just 160,000 MT, worth USD 442 million.

China thought it was the goon. It considered itself the bully. But Russia has slapped China in the face now. It has roped in South Korea, and Seoul has now emerged as a major export destination for Russian seafood. According to SeaFoodSource, China is no longer the top export destination for Russian seafood. South Korea has claimed the top spot, as its Russian seafood imports have increased by 48 percent to 459,200 MT so far in 2021. Russia and South Korea have some differences. But they seem to have decided to keep them at bay in order to teach China a lesson.

It has been a hectic year for Russia and South Korea. Russia is reengaging with the Korean Peninsula after its normally active diplomacy in the area came to a screeching halt in 2020. In March this year, Russian Foreign Minister Sergei Lavrov visited South Korea to uplift ties between Moscow and Seoul. Then, the Russian and South Korean vice defence ministers also met in Seoul, where they inked an agreement on bilateral defence cooperation and resolved to collaborate on denuclearising the Korean Peninsula. Importantly, during Sergei’s visit, Russia and South Korea even discussed the possibility of Russian President Vladimir Putin making a state visit to Seoul.

Russian seafood companies have been very successful in finding new markets around the world. While South Korea has replaced China, other countries are also contributing to Russia’s success. Statistics show that Nigeria has imported 21,500 MT of Russian seafood in 2021 – an increase of 116 times year-over-year. Exports to France also jumped, by 3.7 times, to 4,500 MT, and exports to Norway jumped a multiple of 2.6, to 11,700 MT. SeaFoodSource added that Portugal has purchased 2.5 times more Russian seafood than it did in 2020, at 1,360 MT; and Poland increased its Russian seafood imports by 2.4 times, to 5,800 MT. That’s not the end. As a matter of fact, a record level of Russian seafood is also flowing into Spain, Uzbekistan, Germany, the United Kingdom, Thailand, Kazakhstan, and Belarus. Furthermore, Russia is in talks with countries like South Africa, Namibia, India, Cuba, and UAE to increase its seafood exports there.

Russia Takes a Leaf from Australia’s Book of Handling China:

Mind you, China has a massive and voracious diet for seafood. Such is China’s hunger for seafood that the Communist nation runs a global fishing mafia that engages in illegal and unregulated fishing across the world, especially in the South and East China Seas. The actual reason why China stopped importing seafood from Russia is that it had demanded fishing rights from Moscow in Russia’s exclusive economic zone in the Russian Far East. Russia declined. And therefore, China thought it would punish Russia.

Read more: After waging a trade war for over a year, China now begs Australia for its entry into CPTPP

However, Russia has learnt from Australia, that the best way to deal with Chinese trade excesses is to find alternative markets, become self-reliant and work quickly to decouple from the paper dragon. A trade war is ongoing between China and Australia, and Beijing has stopped importing coal and iron ore from down under. However, Australia has found new markets to export such minerals to, and it is feeling minimal pain inflicted by China.

As far as Russia is concerned, it has waged its own trade war on China. As reported by TFI, last year, Russia emerged as the biggest source of billet. A billet is a small, semi-finished piece of metal that is rectangular, circular, or square in shape. It is a semi-finished casting product that needs further processing before becoming a finished good. Russia is a major exporter of steel billet, exporting millions of tonnes each year to Asian markets such as China, the Philippines and Indonesia.

Russia has understood the ground realities. It knows China has grown an unending appetite for territorial expansion and world dominance. As a superpower right next to China, it has become unfeasible for Russia to put up the charade of ties between the two countries being strong and rosy, when in fact, they are not.