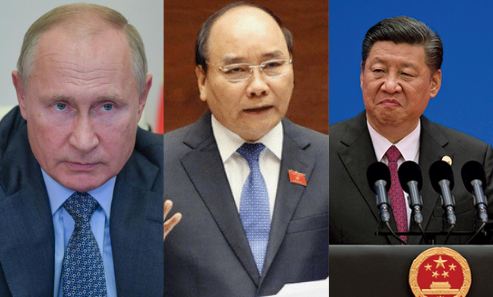 The announcement of AUKUS – a strategic alliance between the United States, United Kingdom and Australia is having quite a number of ripple effects – none of which are remotely positive for China. In order to establish himself as a decisive leader who is committed to counter China’s growing aggression around the Indo-Pacific, Joe Biden led a crusade to form an additional alliance with Australia, with the goal of sending shivers down Xi Jinping’s spine. As it turns out, the United States has also initiated a competition with Russia, and Moscow is keen to participate. One would think that such a competition would calm the nerves of China, but that does not seem to be happening.

Consider the fact that Australia will soon get its hands on nuclear submarines – which in any case was a magnanimous setback to China’s geostrategic considerations and interests in the Indo Pacific. Now, if an analysis by The Conversation is to be believed, Russia could be looking to expand its own nuclear submarine technology around the world, beginning with the Indo-Pacific. That would naturally entail arming China’s enemies in the region, thus making life all the more miserable for Beijing.

According to The Conversation, some Russian diplomatic officials joined their Chinese counterparts in expressing concerns that Australia’s development of nuclear-powered submarines (with American and British help) would undermine the Nuclear Non-Proliferation Treaty and “speed up an arms race” in the region. But who would such an arms race hurt the most?

The answer is China. Should Russia decide to market its nuclear-powered submarines to other nations, it would have no shortage of interested buyers. As one military expert quoted by the publication suggested, Vietnam and Algeria are potential markets for Russian nuclear submarines — but there could be others too. The expert said, “Literally before our eyes, a new market for nuclear-powered submarines is being created. […] Now we can safely offer a number of our strategic partners.”

Essentially, Vietnam could soon find itself an interested party in the acquisition of Russian nuclear-powered submarines, as this would spell doom for China. Vietnam and China have overlapping claims over the South China Sea. In fact, such is the disgust for China in Vietnam, that Hanoi refers to the South China Sea as the ‘South Sea’ alone. Furthermore, China is looking to counter Vietnamese influence in the region – by trying to buy out Hanoi’s immediate neighbours like Cambodia and Laos.

However, Vietnam is pursuing a fine strategy to ensure that China does not come to control both these countries, which is why it is capitalising on the growing anti-CCP sentiment in these nations. Imagine a country like Vietnam having nuclear submarines. Where would it use them? Surely, such submarines would be deployed in the South China Sea. Now, add that with Australia’s upcoming nuclear-powered submarine fleet – and what you have in the region is nothing short of a nightmare for China.

China’s Woes Only Worsen Here On

There is simply no way in which China can ensure that its interests in the Indo-Pacific do not suffer as collateral in the grand arms race which is erupting between the United States and Russia. In fact, with every show of strength by either the United States or Russia – which will follow a tit-for-tat pattern in the future, it is China which will end up suffering the most.

Mind you, the AUKUS alliance has also infuriated France, which is livid at the United States and Australia for blindsiding it with the nuclear submarine deal. France was supposed to supply several conventional submarines to Australia. However, with the announcement of the AUKUS alliance and Washington’s generous offer to give Canberra nuclear submarines, the down under country’s deal with France stood tanked.

As a result of the same, France and India have come even closer. India has swooped in to strengthen its partnership with France, in the backdrop of Paris getting disenchanted with the US. On Saturday, Foreign Minister Dr S Jaishankar spoke with his French counterpart, Jean-Yves Le Drian and reaffirmed India’s commitment to France. Jaishankar and Le Drian agreed to deepen their strategic partnership, “based on a relationship of political trust between two great sovereign nations of the Indo-Pacific”.

France is India’s strategic partner. France is a major defence exporter and has really helped India for many years now. While India’s partnership with Russia and the United States usually steals all the limelight, it is France which has actually delivered India with the best of friendship in strategic terms. Now, the deepening of ties between India and France is no good news for China. Both Paris and New Delhi have high stakes and interests in the Indo-Pacific, and an enhancement of their partnership means China will yet again find itself at the receiving end of geostrategic blows which come as a consequence of the two countries’ ties.

All in all, things look pretty grim for China. It has entangled itself deeply in so many conflicts across the Indo-Pacific that every other global development with strategic and military overtones has begun directly impacting China’s interests in the region. China was sitting around and poking every country of the Indo-Pacific in the face. Now, its actions have come back to bite it very hard.