“Run for your lives,” China tells its citizens to flee Congo

The Chinese Embassy has run into panic mode 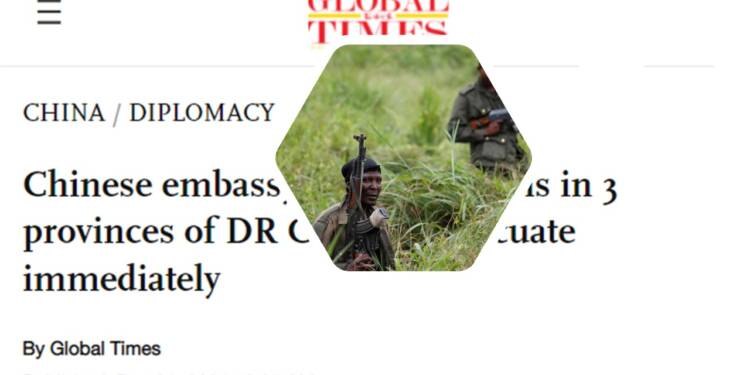 The Chinese State has been committing some ghastly crimes in the Democratic Republic of Congo and now the people of China living in the African nation seem to be paying for the misdeeds of their country. In fact, the Chinese Embassy in the DRC is asking Chinese people to leave behind everything except the shoes on their feet and clothes on their bodies and run for their lives.

​The Chinese Embassy has run into panic mode, after a huge leak of 3.5 million documents exposed how the Chinese State was looting Congolese wealth by digging up the African nation’s mines and surreptitiously transferring all its wealth to China, without any proceeds going to the Congolese people.

Chinese State-owned publication Global Times has reported, “The Chinese Embassy in the Democratic Republic of Congo (DRC) issued an urgent notice requesting Chinese nationals in the three eastern provinces of DRC — Ituri, North Kivu and South Kivu — to report their information to the embassy and evacuate immediately after a number of vicious cases of armed robbery and kidnapping of Chinese nationals took place in the region.”

Global Times added, “Chinese nationals in the area around Bunia and Djugu in Ituri, Beni and Rutshuru in North Kivu, and Fizi, Uvira and Mwenga in South Kivu are requested to evacuate to other safe areas in the DRC as soon as possible, said the embassy.” The Embassy has also stated that those who refuse to report their personal information and insist on staying in the three provinces will be personally responsible for the consequences that ensue.

The Chinese Embassy has created an entire code of conduct for Chinese interests located in the DRC that involves paying close attention to the local situation, strengthening safety precautions and emergency preparedness, and venturing out only it is absolutely unavoidable.

The Chinese Embassy has issued the latest warning in the midst of recent reports that two Chinese nationals were killed and five kidnapped during an armed attack on a goldmine in the Democratic Republic of Congo.

Chinese State Councilor and Foreign Minister Wang Yi himself urged the DRC to secure the release of Chinese nationals held captive by local attackers and to take effective measures for protecting Chinese citizens in the African nation. He also expressed concern about the kidnapping and killing of Chinese citizens in the DRC during the 8th Ministerial Conference of the Forum on China-Africa Cooperation (FOCAC) with Christophe Lutundula, Deputy Prime Minister and Minister of Foreign Affairs of the Democratic Republic of the Congo (DRC).

Explosive report exposes how the CCP was trying to usurp Chinese wealth:

It is not as of the people of the Democratic Republic of Congo are turning against China for no good reason. A latest Bloomberg report has revealed that a Chinese-run company moved millions of Dollars to former DRC President Joseph Kabila’s cronies.

Money flowed through to Kabila’s allies via a bank partly owned by his sister and run by his brother, Selemani Francis Mtwale. The Congo Construction Co. (CCC), which was founded by a Chinese national Du Wei, also facilitied transactions tens of millions of dollars that benefitted people and companies close to former President Kabila.

According to the expose, over five years, tens of millions of dollars flowed through CCC’s accounts to people and companies associated with Congo’s then-president, Joseph Kabila, all at a bank partly owned by his sister and run by his brother, Selemani Francis Mtwale.

The investigation found that at least $138 million was transited through the BGFI Bank by the Chinese to stuff President Kabila and his family. It helped in the takeover of much of the Congolese mining industry by Chinese companies.

It was, of course, in a sharp reaction to the exposed loot that Chinese nationals in the DRC started getting attacked. As the Congolese people started getting aware about how the Chinese were bribing Congolese leaders and trying to transfer their wealth back home to China, they reacted with sheer force and coercion. Now, the Chinese government, which is itself cognizant of the magnitude of its ghastly crimes in the African nation is asking its citizens to flee the DRC even if it means giving up all the wealth up for grabs in the resource rich country.