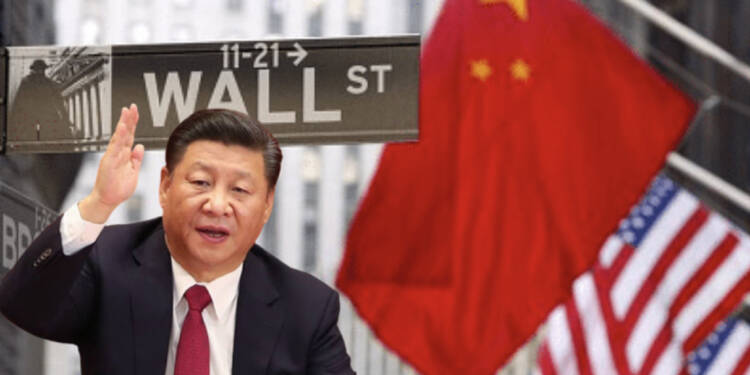 The romance between China and Wall Street is coming to an end. It has been a very expensive romance, worth trillions of dollars. The breakup will obviously have economic ramifications for both China and the United States, since Wall Street was so deeply and madly in bed with Chinese companies and the CCP. But China no longer requires Wall Street. The primary reason why China invested so heavily in Wall Street was to gain access to Washington DC and the powers that be. Now, that access has become redundant, as ties between both the countries are in a deep freeze. China can no longer use its influence over Wall Street to influence political considerations in Washington.

So, the umbilical cord between Beijing and Wall Street has been snapped. Leading the crusade to decouple from Wall Street is Didi Chuxing, a $39 billion company that is China’s answer to Uber. On Friday, Didi said that it would delist its shares from the New York Stock Exchange. Didi will now be moving to the Hong Kong stock exchange, six months after the Chinese ride provider’s bombastic Wall Street debut made global headlines. In June this year, Didi was able to raise billions of dollars from US pension funds and international investors in a splashy New York initial public offering (IPO).

However, immediately after Didi’s debut at the New York Stock Exchange, the CCP cracked down hard on the ride provider. Chinese regulators banned Didi from app stores in China, saying it broke data privacy laws and posed cybersecurity risks. Subsequently, its share price collapsed. That is when Chinese companies realised, they could no longer exploit a loophole in Chinese law to go public overseas, especially in the United States of America.

Wall Street giants such as Goldman Sachs Group Inc. and JP Morgan Chase & Co. have tens of billions of dollars at stake in China. Five big US banks had a combined $70.8 billion of exposure to China in 2019, with JP Morgan alone ploughing $19.2 billion into lending, trading, and investing. As reported by TFI last year, Goldman Sachs and Morgan Stanley have taken major control of their Chinese securities ventures. HSBC acquired full control of its Chinese life insurance venture. Citi received a coveted custody license to serve institutional investors in China.

Read more: The umbilical cord that extends from USA’s Wall Street to Beijing is a major threat to America

China has a three-decade-old association with Wall Street. Now that the CCP has decided it no longer requires Wall Street, firms like Goldman Sachs, Morgan Stanley, and investment banks of all colours and hues will see their fortunes in China collapsing, apart from Chinese companies no longer helping these firms make big money. As early as last month, Goldman Sachs Asset Management was buying one of the world’s most distressed assets – Chinese real estate debt, even as other investors shied away and ran for their lives.

It is not as if China is alone in destroying the fortunes of Wall Street. The United States has woken up to the threat posed by Chinese companies owned by CCP as well and is beginning to crack down on them. The Securities and Exchange Commission (SEC) on Thursday announced the adoption of a rule allowing them to delist foreign companies from Wall Street exchanges if they fail to provide information to auditors. The move is aimed squarely against Chinese companies.

Wall Street managed to dodge the carnage of the U.S.-China trade war, but it could be among the biggest losers from the ongoing developments.

What zone is Virginia for plants: everything you need to know