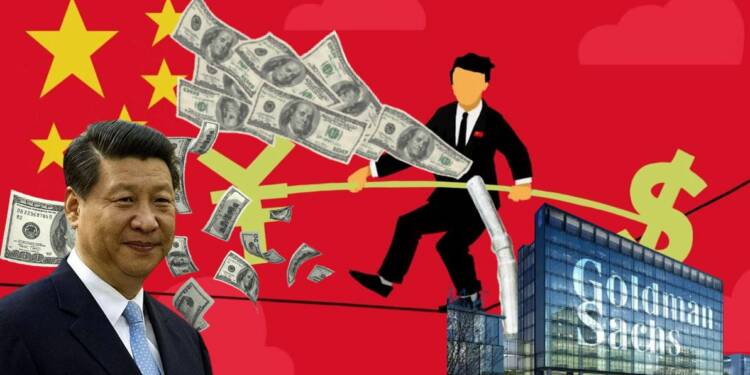 In September, China’s trade surplus with the USA rose to a monthly record of $42 billion — exports surged by about 30% from a year ago, while imports climbed by just under 17%. It is almost as if Joe Biden is trying save China from running its economy into the ground. And the Democrats are not really alone in their efforts. They have mobilised Wall Street in a big way, and together, these behemoths aim at rescuing China from imminent collapse. We all know China’s real estate sector is crashing, right? With it, the Chinese economy has begun unwinding. But do you think that it is a good news for either the Biden administration or Wall Street giants? No. It’s a nightmare for them. Wall Street giants such as Goldman Sachs Group Inc. and JP Morgan Chase & Co. have tens of billions of dollars at stake in China, as political tensions between Washington and Beijing risk derailing the communist nation’s opening of its $45 trillion financial markets.

Five big US banks had a combined $70.8 billion of exposure to China in 2019, with JP Morgan alone ploughing $19.2 billion into lending, trading and investing.

Goldman Sachs to the rescue!

Now that we have established the heavy interests of Wall Street hegemons to keep the Chinese economy alive, it would only be prudent for us to also tell you how a major Wall Street player is actively using American money to rescue China’s falling real estate sector. We are talking about Goldman Sachs here. According to Bloomberg, Goldman Sachs Asset Management is buying one of the world’s most distressed assets – Chinese real estate debt, even as other investors shy away.

The Bloomberg report shed light on how Goldman Sachs is going out of its way to help China during its time of crisis. At a time when the United States should be capitalising on China’s miseries and defanging the communist nation, Goldman Sachs is actually filling up the enemy nation’s poison tanks. According to Angus Bell, a member of Goldman’s portfolio-management team, the firm has been adding a “modest amount of risk” through high-yield bonds issued by China property developers, denominated in US dollars.

Goldman has also added Chinese government local currency bonds to its investments, in what Bell described as a “risk-off” trade. Additionally, Goldman Sachs is desperately trying to convince the world that China’s economic woes are temporary, and that the CCP will intervene soon, and that it will all get back to normal, in no time. According to Goldman Sachs, the market is overestimating the contagion risk posed by the imminent downfall of the Evergrande Group in China.

Angus Bell from Goldman said, “Ultimately, the property sector has been the key driver of Chinese growth over the past two decades. It’s unlikely the government will tolerate the impact on growth that would come about if it were to allow such a large number of developers to fail. The breadth of distress that the market is now pricing, it’s starting to look significantly out of alignment with the true extent of distress.”

Goldman Sachs has a rather colourful history of remaining optimistic on China. Only last month, Goldman Sachs’ Timothy Moe said that there are pockets of opportunities in China’s stock markets, despite an increasingly challenging investment backdrop. He added, “There are certainly a host of challenges that China is facing right now — but we would push back quite vigorously on the sweeping statement that China is uninvestable.”

The Biden administration has come to the rescue of a rapidly deflating Chinese economy. According to a separate report by Bloomberg, unprecedented trade surpluses and historic bond inflows have given China a dollar stockpile not seen since the ‘Asian savings glut’. As per reports, while some of that flood of greenbacks is ending up as deposits at Chinese banks, the large ‘errors and omissions’ in the nation’s balance of payments is muddying the picture.

Also read: Under Biden, the US is generously pumping dollars into the Chinese economy and keeping it alive

It is almost as if the USA’s current administration and Wall Street is providing China with a significant cushion against future global economic shocks. However, they are being exposed while at it, and their dirty secret is out for the whole world to see. Needless to say, the Biden administration and its lackeys in Wall Street will not be able to get far with their unpatriotic racket.