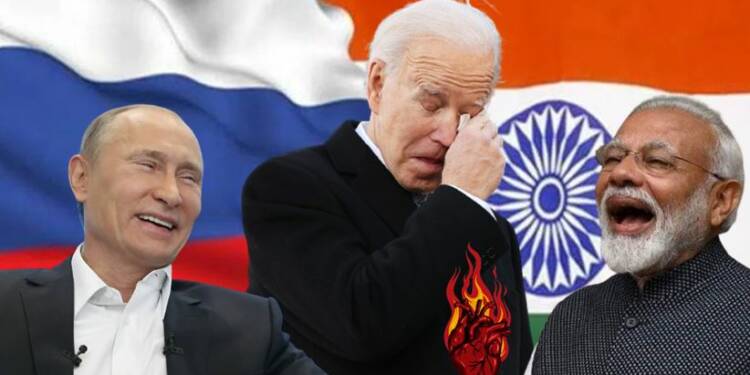 Tensions between the United States of America and Russia are running high. Russia has placed close to 175,000 of its troops on the borders of Ukraine, and US intelligence suggests that Moscow could be preparing to invade the country early next year. In return, the Biden administration has warned Vladimir Putin with strong economic sanctions, although the use of American military force has been kept off the table for now, and in the foreseeable future as well. Washington has threatened to take Moscow off the SWIFT (Society for Worldwide Interbank Financial Telecommunication) financial system, which could wreak havoc for ordinary citizens and even have its own set of consequences for a recovering global economy.

Russia needed an immediate image booster. Importantly, Vladimir Putin has not stepped out of Russia ever since the Covid-19 pandemic set in, except for when he flew to Geneva for a summit with Joe Biden. On Monday, Vladimir Putin flied down to India for a five-hour visit, during which he met his friend, Prime Minister Narendra Modi, and oversaw the inking of at least 28 bilateral agreements. This was Putin’s only second visit out of Russia ever since the pandemic began. So, it caused a lot of heartburn in Washington.

On Monday, the bonhomie between Narendra Modi and Vladimir Putin was put on grand display, and the whole world watched as India and Russia embraced each other. At a time when the US and NATO are pushing for Russia to be alienated, India took an independent foreign policy decision by welcoming Putin with both arms wide open. This came despite the US trying to pressurise India with the subtle threat of CAATSA (Countering America’s Adversaries Through Sanctions Act) sanctions for its purchase of Russian defense equipment.

In his televised opening remarks at the summit, Putin described India as a “great power” and a time-tested friend, and said Russia works with India in the military-technical field “in a way that we do not work with any of our partners”.

On his part, Prime Minister Modi said that this was Putin’s only second foreign visit since the start of the Covid-19 pandemic, and that it reflects his personal commitment to bilateral relations. Modi also said that the India-Russia friendship has “remained a constant” despite many fundamental changes on the world stage, and the two countries have cooperated closely while paying attention to each other’s sensitivities.

As is widely known, Russia has begun delivering the formidable S-400 air defense systems to India this month. As deliveries begin, the threat of Washington DC imposing sanctions on India under the Countering America’s Adversaries Through Sanctions Act (CAATSA) remains, although chances of Biden actually growing a pair and imposing them are bleak.

Also read: India may give another heartburn to Biden as it plans to buy Russia’s S-500 and S-550 anti-missile systems too

Nonetheless, Russian foreign minister Sergei Lavrov said the US tried to strong-arm India into opting out of the pact but New Delhi went through anyway. Lavrov was quoted as saying by news agency ANI, “We witnessed attempts on the part of the United States to undermine this cooperation and to make India obey the American orders, to follow the American vision of how this region should be developed”.

In light of the USA’s concerns regarding the bonhomie between Russia and India, one would have expected Putin’s visit to India to be a low-key affair which would be kept away from the media glare. However, the five-hour visit of the Russian President was orchestrated to be a grand event which global media is now talking about.

The consensus between Moscow and New Delhi seems to have been clear – make the United States uncomfortable and jealous. The US would want for Russia to be isolated internationally. India, however, is spilling ice-cold water on such plans of Joe Biden, while making it clear to Washington DC that its foreign policy remains sovereign and independent.