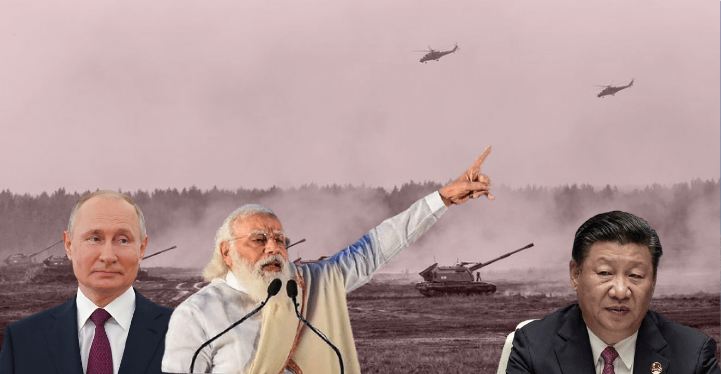 Russian President Vladimir Putin carries a ‘strongman’ image. But notwithstanding his tough image, the former KGB spy does understand the subtle art of diplomatic soft-signalling. With the Zapad military exercise, the Russian President has used the opportunity to signal that the Kremlin isn’t going to support the Taliban, rather it is readying a strong pushback against the China-Taliban nexus.

India in, China out

Meanwhile, India has unexpectedly chosen to send a small contingent for the Zapad exercise though the Indian forces will be using Russian tanks and infantry vehicles while participating in the military exercise. India’s participation is surprising, as New Delhi doesn’t have any significant interest in the venue of the exercise that focuses on Russia’s Western Military District and Belarus.

Therefore, China’s exclusion and India’s inclusion in Zapad is more symbolic than strategic for Russia. Putin is signalling his desire to collaborate with anti-Taliban forces like India, while sidelining the Taliban’s biggest supporter, China.

Putin’s many warnings to the Taliban

The West has been adamant on projecting Russian President Vladimir Putin as one of the global leaders who support the Taliban. However, Putin is repeatedly showing his aversion towards the Taliban. In fact, Russia is tacitly warning the Taliban and its supporters against any misadventures.

In fact, China’s exclusion from a strategic military exercise in Russia can actually be interpreted as a punishment for Xi Jinping’s perceived proximity to the Taliban. Beijing believes that it can create a security threat for Central Asia, Russia and India by empowering the Taliban but Putin has impliedly suggested that if China joins hands with the Taliban, then other regional powers can easily get together to sideline China in Eurasia.

Earlier, the Kremlin gave a cold shoulder to the Taliban by making it clear that Russia will not take any part in the inauguration of the Taliban government in Afghanistan.

Meanwhile, Russia continues to refuse any imminent possibility of recognising a Taliban government in Afghanistan. Russian envoy to India Nikolay Kudashev was quoted as saying, “Recognition (of government in Afghanistan) is too early to say. Is any government or any governing structure officially available in Kabul now? Not yet. It is admitted by Afghans themselves. After decades of war, it hasn’t come as a surprise to us.”

Putin bats for ‘peace’ in Afghanistan

Moreover, Putin has himself signalled great aversion towards the Taliban. Addressing the 15th anniversary of BRICS virtually on Thursday, the Russian President said, “We are all for Afghans living in peace.” He added, “We have to ensure non interfere into the internal affairs and respect their sovereignty.”

“The citizens of Afghanistan have fought for decades and deserve the right to define what they will look like. I am sure that we can ensure development and co-existence while maintaining traditions.”

Putin’s remarks were quite clearly aimed at the threats posed by the Taliban. By expressing the desire of ensuring “peace” in Afghanistan, respecting “sovereignty” and emphasising “co-existence”, Putin is making it clear that Russia won’t stay quiet if the Taliban gets brutally assertive in Afghanistan.

Russia has already stepped up military cooperation with its Central Asian allies like Tajikistan and Uzbekistan who face a very real danger of infiltration by Taliban fighters and Mujahideens from neighbouring Afghanistan. Now, Moscow is also collaborating closely with a significant military power like India in a clear pushback against the China-Taliban nexus.