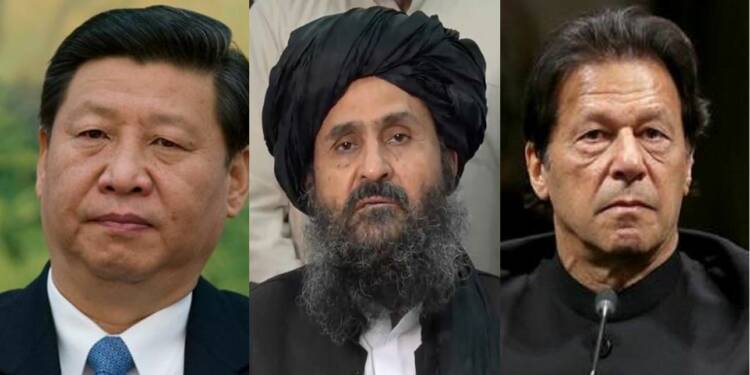 In ten years, if the Taliban-China-Pakistan axis is not broken, the world will stare at many changes – radical ones no less, in not just South Asia, but all across the Middle East, Central Asia and the larger Indo Pacific. To break the axis of these three evil entities, the spines of all of them must be broken individually. The Taliban, Pakistan and China must all be disempowered. Ideally, China should disintegrate into bits and pieces in the next ten years. The Taliban should be driven back to their caves, or even better, exterminated. Pakistan too should be broken up into bits and pieces.

However, if this utopic scenario fails to pan out, the world will have a serious problem to deal with in the form of the Taliban-Pakistan-China axis. This axis would be disruptive, expansionist, violent and pure evil in nature. All three entities of the axis are genocide enablers. For their alliance to be strengthened would simply be terrible for the world, especially for the immediate neighbourhood of Afghanistan, Pakistan, and China. There are quite a number of impacts which this axis can have on the world.

Afghanistan will emerge as a full-fledged and booming narco-state, and it is entirely possible that the Afghan economy under the Taliban becomes dependent on one sector, which would be the opium and narcotics sector. It has been seen that drug lords, opium field owners and traders are usually the ones who support the Taliban in Afghanistan since under their reign, the drug business in the country booms.

Opium from Afghanistan will find its way across the world and will definitely be smuggled in large quantities across South Asia and Central Asia. So, India, Russia, Central Asian nations, and some Gulf states too would end up in a problematic situation, wherein large quantities of Afghan opium would make its way into their territory, courtesy the help extended to the Taliban by both China, as well as Pakistan.

Once an Afghan economy is reconstructed and financial systems come up in the country, the Taliban would be approached by clients from around the world to launder money and clean dirty cash. The Taliban has been known to indulge in such acts in the past and needs no incentive to launder dirty money other than being able to fund its own pockets and nefarious activities across Asia. Along with drug money, the Taliban will make a fortune out of laundered money as well.

A Taliban regime in Afghanistan, aided by Pakistan and China for the next ten years could spell trouble for India, especially in Kashmir. Afghanistan could well become a net exporter of terror along with Pakistan, while both get funded by China. Terror activities across Asia, and even the world will witness a spurt. For India, the Taliban, along with Pakistan could try spelling trouble in Kashmir, although New Delhi is well prepared to handle any number of contingencies in the valley.

Pakistan will find itself to be idle, and in control of a near-puppet regime in Kabul. This would embolden Islamabad to try its luck against India, although, like the many wars it has lost in the past, Pakistan would end up receiving a humiliating bloody nose once again. All said and done, India will be facing a headache if the axis of China, Taliban and Pakistan is not put down soon.

For Russia, the rise of the Taliban and its allies – China and Pakistan, is no good news. Despite assurances by the Taliban that it is a changed organisation and one focussed on the welfare of Afghanistan alone, the reality is that the Taliban’s toxic, hateful and violent Islamist ideology will make its way into Central Asian nations – all of whom are former Soviet states and ones which have an Islamic character already. Therefore, the ideology of the Taliban will definitely end up penetrating into Central Asian states and eventually making up its way into South Russia – which would be quite a problem for Moscow.

Trouble will also mount for Iran – which is a Shi’ite nation, while the Taliban is a hardcore, orthodox, and extremist Sunni organisation. This would result in the classic Shia-Sunni conflict between Afghanistan and Iran.

The continuance of a Taliban regime in Afghanistan will result in the widening of the Sino-Russian rivalry. China will be using Afghanistan to fulfil its Belt and Road ambitions, connecting itself to Europe, in the event that Beijing’s BRI dreams completely collapse in Central Asia at the behest of Russia. So, China will be using Afghanistan and Iran to connect itself to the Middle East, the Mediterranean and Europe. Meanwhile, Russia and India are working together on the International North-South Transport Corridor, which connects India’s Mumbai directly to Russia, via Iran, Azerbaijan, and the borders of Central Asia. Therefore, at some point, Russia and India’s INSTC and China’s BRI will intersect, and this might just become the point of some very big conflicts in the long term.

Read more: China has bitten off more than it can chew in Afghanistan

Another major impact that the China-Pakistan-Taliban axis will have would be on the Middle East and Arab states therein. Unlike the 90s, Gulf states do not seem very enthusiastic about recognising the Taliban this time round. Until Saudi Arabia and UAE do not recognise the Taliban, no Muslim country in the region would. Given how both Saudi Arabia and UAE have come to view Pakistan and China, the Taliban might run into a roadblock with its Middle East outreach. In the process, Saudi Arabia and Iran could come closer to each other since they would need to put to bed their own hostilities to deal with a Sino-Taliban alliance. Pakistan, of course, is a comical entity for the Arab countries.

But all of this is just phase one.

Phase II includes the Taliban ditching Pakistan, backstabbing it, and forming an alliance with the Pakistani Taliban – comprised of Pashtuns too, to take over regions of Pakistan that have a sizable Pashtun population, or which the Afghan Taliban considers as Pashtun land. This plan is definitely in place, which is why the Pakistani Taliban is celebrating their Afghan counterparts’ victory in Kabul more than the government of Pakistan itself. This might sound hilarious, but if Pakistan thinks that a bunch of radicalised tribal monkeys of the Afghan Taliban are now going to sit back in Kabul and administrate Afghanistan for the rest of their lives, Islamabad is in for a big surprise. The Afghan Taliban loves fighting, and it will continue doing so for as long as it is around. What will be achieved by this alliance of Afghan and Pakistani Talibs is a Greater Afghanistan, or Pashtunistan – resulting in the disintegration of Pakistan.

All, or some of these events could unfold before the world’s eyes in the next ten years, and if they are to be prevented, the only antidote is the dismemberment of the Pakistan-China-Taliban axis which currently exists and is thriving.