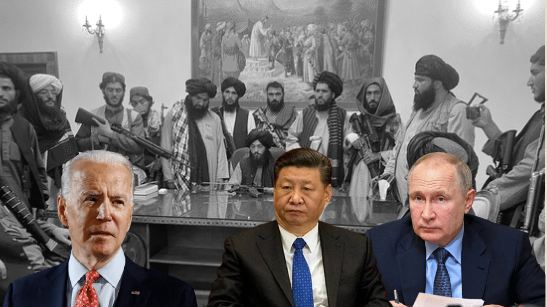 China under the leadership of Xi Jinping has developed some self-destructive habits. Be it jumping the gun and making the worst possible foreign policy decisions or being so proud that they cannot accept wrong decisions making it all the more difficult to do course correction. After trying to replace the US in Afghanistan eyeing the mineral wealth of the war-torn country, Beijing has realised that it has bitten off more than it can chew in Afghanistan. Recently, China was pleading with Russia for help in the garb of cooperation vis-a-vis Afghanistan. And now Beijing is trying to force the USA to come together and cooperate in Afghanistan citing moral responsibility.

Chinese Communist Party mouthpiece Global Times citing Chinese analysts mentioned that they warned if the US wants China’s assistance, it must demonstrate adequate sincerity by correcting its shortcomings, such as double standards in counter-terrorism and confrontation with China in other domains. They also stated that if Afghanistan fails to achieve long-term peace and once again becomes a breeding ground for terrorism, terrorist groups around the world targeting the United States as their primary target will have an opportunity to prepare for another 9/11 attack.

China is, thus, making such concerning remarks so that the USA finds it better to cooperate with China in Afghanistan. This has become imminent given the fact that China finds itself economically, diplomatically and militarily stretched with its attempted entry into Afghanistan. And while being led by a stubborn megalomaniac, Beijing cannot accept weakness and is trying to coerce the Biden administration into working together.

For China, the problem is that a flare-up in Afghanistan can move beyond its borders and enter the Xinjiang region of China, where CCP is committing industrial-scale brutalities on the ethnic Uighurs. China also wants to secure its CPEC project and is even trying to extend it into Afghanistan. All these objectives are making the communist autocracy enter the country what is very rightly referred to as the graveyard of great powers, and thus these objectives will only pull Beijing deeper into the abyss. While Beijing was earlier trying to portray a strong image, it has now realised that it has bitten off more than it can chew.

Read more: Congratulations world. China is officially entering Afghanistan to never come out of it again

Taliban has the ability to use the ETIM (East Turkestan Islamic Movement) and other terror groups in Afghanistan as a bargaining chip to ensure that China does not pretend to be the alpha male in their bilateral dynamic and with the latest developments, it has already started to utilise that position. As the Taliban agrees to tame the ETIM, the terror organisation and Taliban would have found a mutual benefit by cooperating with each other. While China will help the Taliban build and reconstruct the war-torn country that Afghanistan has become, the Taliban will make sure that no extremist or militant groups threaten China’s brutal hold over the Xinjiang province.

As per Global Times, late Monday, Chinese State Councilor and Foreign Minister Wang Yi spoke over the phone with US Secretary of State Antony Blinken about the situation in Afghanistan and bilateral ties at the request of the US side. During the phone discussion, Wang stated that China is willing to engage with the US in order to strive for a gentle landing in Afghanistan, so that a new civil war or humanitarian disaster is avoided, and the nation does not revert to becoming a hub and refuge for terrorism. While China also has its fair share of problems and knows it needs the US presence and commitment to save itself from humiliation, it is trying to force the Biden administration into compliance.

The desperation is visible by the fact that China is also trying its best to bring Russia to its side and deal with Afghanistan together. Chinese foreign minister Wang Yi on Monday urged Russia to strengthen its strategic dialogue with China on the Afghanistan situation. Wang Yi also pleaded that Russia and China should work together to save each other’s interests in the region and both the countries should pursue “friendly relations” with the Taliban. China has resorted to pleading with Russia to go soft on the Taliban so that its own interests in Afghanistan can be kept intact. China knows that Russia’s President Vladimir Putin can go all guns blazing after the Taliban in the same way he went after the ISIS in Syria in 2015.

For the USA, China is employing a different method. Beijing is trying to guilt-trip the US into helping it, by preaching morality and responsibility to the Biden administration. Why else would they be showing that it was the US that requested China’s help to stabilise the region? Xi Jinping knows that he has overstepped by jumping into the Afghanistan fiasco and given the flawed pride, instead of accepting the problem and course correction, he is trying to guilt-trip the US into cooperating vis-a-vis Afghanistan.