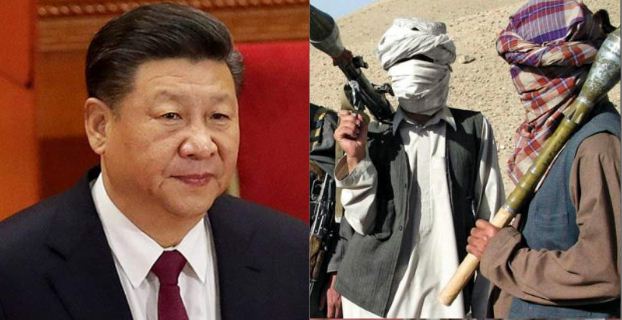 The Chinese President is playing with fire and is putting his country in harm’s way, quite literally. As per a latest report published by US News, China is ready to recognise Taliban as the legitimate ruler of Afghanistan if it is successful in toppling the democratic government in Kabul. So, it is now official that China totally supports Taliban in Afghanistan and Beijing is no longer hedging its bets. It has chosen Taliban over the civilian regime established in Afghanistan.

According to many U.S. and foreign intelligence sources familiar with the Chinese intelligence assessment of the situation in Afghanistan, the Chinese Communist Party (CCP) leaders are being prompted to formalise Beijing’s relationship with Taliban. However, any such step by China is bound to backfire badly and expose the Communist nation to Afghanistan-based groups like the East Turkestan Islamic Movement (ETIM) who want to wage insurgency in China’s far-West Xinjiang province.

Beijing’s desperation is actually quite clearly visible. When Taliban had invaded Afghanistan in the 1990s, only three countries had recognised it, namely Saudi Arabia, the United Arab Emirates (UAE) and Pakistan. But this time around the Arabs are showing no signs of embracing Taliban. Turkey, another claimant of the leadership of the Muslim world, too is miffed with Taliban’s offensive in Afghanistan.

Amongst the Islamic countries, Pakistan is the only one that wants to legitimise, and recognise Taliban. Pakistan’s Prime Minister Imran Khan is actually acting as a despicable broker for Taliban, while supporting the militant group’s attempts to undermine and topple the civilian government in the country led by Afghan President Ashraf Ghani.

Meanwhile, China feels that it can ride on Pakistan’s influence and linkages with the Taliban, in order to curry favour with the militant group. A lot is actually at stake for China in Afghanistan. Firstly, Beijing wants to secure benefits of prior economic investments that it has made in Afghanistan including mineral rights in the war-ravaged country and ultimately, China wants to loot Afghanistan’s natural resources and mineral wealth.

Secondly, Beijing fears that over a million Uighur Muslims who are being tormented by Chinese authorities in Xinjiang might find support and provocation from certain groups like ETIM operating from Afghanistan. China wants a tacit understanding with Taliban against any groups that might be looking to instigate insurgency in Xinjiang.

Thirdly and finally, China wants security of access into the Indian Ocean Region (IOR) through Afghanistan. In fact, China aspires to reach Iranian ports through a network of BRI projects in Afghanistan, which won’t be possible without Taliban’s cooperation. This is a part of China’s strategy to avoid the “Malacca dilemma” and reach the Indian Ocean. Apparently, this was also a driving factor behind the China Pakistan Economic Corridor (CPEC) whereby China wanted to access Pakistan’s Gwadar port.

China’s BRI interests in Afghanistan become that much more important, because the CPEC is going to the dogs with frequent attacks on Chinese interests by the Baloch Liberation Army and Tehreek-e-Taliban Pakistan (TTP).  Moreover, four of China’s six so-called Silk Road networks, including the China-Pakistan Economic Corridor (CPEC), emanate from or pass through Xinjiang. Therefore, any kind of insurgency by Afghanistan-based militant groups can spell trouble for Xi Jinping’s flagship Belt and Road Initiative (BRI).

China is obviously getting trapped in Taliban’s web. And ultimately, this is going to be suicidal for Beijing. Taliban is, of course, going to take a lot of money from China for any level of understanding against instigating insurgency in Xinjiang. However, Beijing cannot expect any goodwill gesture on Taliban’s part. At the end of the day, it is a militant group that never disowned any terror or extremist group, be it al-Qaeda or the Islamic Movement of Uzbekistan (IMU) or TTP. So, why would it completely disown ETIM?

In fact, no matter what deal China strikes with Taliban leadership, it is difficult to accept that ground-level commanders would actually abide by the terms of such an understanding. China is giving away too much of leverage to Taliban. Taliban is going to hold Xinjiang ransom because it is fairly easy for it to enable militants to enter the Chinese province via the narrow Wakhan Corridor. If the Taliban starts encouraging ETIM or similar groups, it will resurrect an armed insurgency in Xinjiang in no time.

From here on, China is going to face continuous blackmailing from the Taliban and it seems that by preparing to recognise it, Beijing is taking a suicidal step.