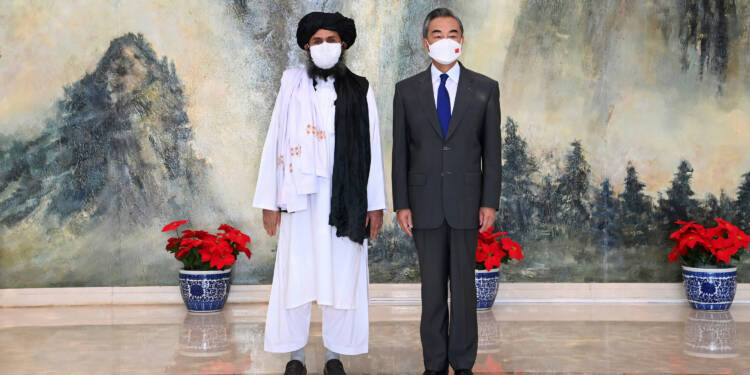 The entire world seems to think that China and the Taliban have become friends. People see an unnatural relationship thriving between the Islamist-Jihadist group called Taliban and the Communist regime of China. There is supposedly a deal between the two- the Taliban will not harm Chinese projects in Afghanistan and China will continue the inflow of money into Afghanistan which will help the Taliban. However, the main deal between them concerns Uyghur Muslims in Xinjiang.

China is paying a lot of money to the Taliban, in return for a promise that the Taliban will not support Afghanistan-based ETIM, a militant organisation that seeks to fight against Chinese excesses and human rights violations in the Xinjiang province. China also wants the Taliban to deport any Uyghur Muslims found in Afghanistan. This is a part of China’s strategy to avoid an armed insurgency by Uyghur Muslims in Xinjiang, but the Taliban seems to be exploiting China’s fears for trapping it.

The East Turkestan Islamic Movement (ETIM) based in Afghanistan wants to stop at nothing short of liberating Xinjiang from the clutches of the Chinese Communist Party. It envisions the formation of an independent State called “East Turkestan” and recognises the fact that much like Tibet, Xinjiang is also a territory that was annexed by China.

Presently, China has dumped over 1 million Uyghur Muslims into internment camps and it is speculated that a Taliban takeover in Afghanistan will lead to groups like ETIM recruiting and radicalising more Uighur youth, many of whom are already deeply disaffected by reports of Beijing’s “vocational camps” and authoritarian control of Muslim religious practices in Xinjiang. This is why China fears ETIM and other such groups based in Afghanistan.

China and Pakistan have already blamed ETIM and Tehreek-e-Taliban Pakistan (TTP) for colluding with each other to carry out a bomb blast, killing nine Chinese engineers working on a CPEC-related dam project in Pakistan’s upper Kohistan region. So, ETIM might be looking to attack Chinese interests whenever and wherever possible.

In order to avoid the rise of pro-Uyghur groups in Afghanistan, China has been cooperating with the Taliban for quite some time now. However, for the Taliban, the deal of not supporting ETIM and deporting Uyghur Muslims found in Afghanistan is a mere monetary agreement. For the Taliban, it is a bargaining chip to secure China’s assistance and money.

So, the big question is for how long will the Taliban refuse to support ETIM? After all, the Taliban’s cooperation in not upping the ante in Xinjiang is not really a goodwill gesture on its part.

In fact, China is being fanciful in thinking that the Taliban would disown ETIM. Asia Times quoted Afrasiab Khattak, a politician, intellectual, and Pashtun rights activist as saying, “Taliban haven’t done it (breaking away) on al-Qaeda, Islamic Movement of Uzbekistan (IMU), TTP, etc. Why would they do it on ETIM?”

Farhatullah Babar, a Pakistani leftist politician and former lawmaker, also thinks on similar lines. He said, “China has drawn the line and the Taliban need to expel all terrorist groups who took shelter in the areas controlled by their forces. However, taking a cue from their previous record of breaking promises, they are unlikely to adhere to their commitments and promises.”

In fact, the top leadership of the Taliban may be giving China the impression of cooperation, but the ground-level leadership and commanders of the jihadist organisation do not really share the sentiment of breaking ties with groups like ETIM.

For China, the Taliban’s cooperation is critical. It has some serious Belt and Road Initiative (BRI) interests rooted in Afghanistan, and Beijing aspires to reach Iranian ports through a network of BRI projects in Afghanistan. This is a part of China’s strategy to avoid the “Malacca dilemma” and reach the Indian Ocean. Apparently, this was also a driving factor behind the China Pakistan Economic Corridor (CPEC) whereby China wanted to access Pakistan’s Gwadar port.

However, China understands that just like the Baloch Liberation Army and TTP have shattered its CPEC dreams, ETIM can damage China’s BRI projects in Afghanistan. Moreover, China fears if ETIM is also joining hands with TTP to further damage CPEC by attacking Chinese interests in Pakistan.

And finally, the intrusion of ETIM militants into Xinjiang is China’s biggest fear. An estimated 500 ETIM militants are presently operating in the Northern and Northeastern regions of Afghanistan. From here, the ETIM militants can easily enter China via the narrow Wakhan Corridor and infiltrate into Xinjiang. If the Taliban starts promoting ETIM, it will resurrect an armed insurgency in Xinjiang in no time.

We are talking about a full-fledged fight in Xinjiang if ETIM militants are able to enter the region. Xinjiang has experienced armed insurgency in the past, with China blaming ETIM for having orchestrated many attacks in the province in the past.

For China, stopping ETIM militants without Taliban support isn’t really possible. We are talking about the Wakhan Corridor, a geographically remote location situated at an altitude between 3,000-4,900 meters. Xinjiang is itself a mountainous, remote region and it is not possible to monitor its borders despite the use of high-tech surveillance of Uyghur Muslims by the CCP authorities.

China can never discount the possibility of infiltration into Xinjiang via the Wakhan Corridor or the Central Asian nations, which makes it very nervous. Taliban knows this and therefore, it is practically extorting Beijing, and securing China’s money and support.

Presently, China feels that it is dealing with the Taliban. But the Taliban is simply exploiting China’s compulsions. Once it is done milking China, it will reduce China into a slave in the region by holding the entire region of Xinjiang to ransom.