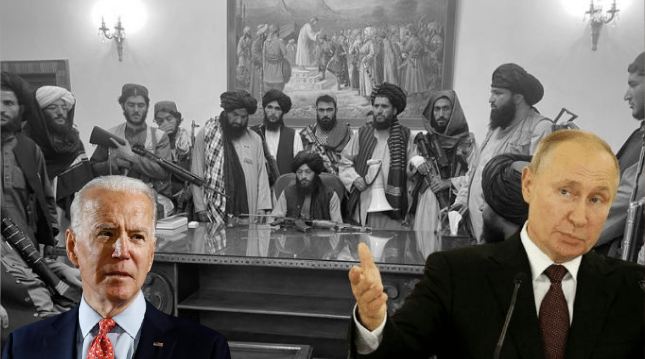 Russia is an inscrutable player. Its policies are unfathomable. Vladimir Putin is still pretty much an enigma despite four Presidential terms and one term as the Prime Minister. Hence, too many things get attributed to Russia and Putin. And often, there is no retort from the Kremlin. However, a Democrat-led Washington has been engaging in brazen anti-Russia propaganda, which simply has no truth to it. It is a concoction of lies, falsities and unrealities. This propaganda is imaginative in nature, and the White House is trying to sail through tumultuous times in America using this propaganda. This propaganda is that of Russia supporting the Taliban alongside China.

Russia Supporting Taliban? Is this True?

Let us come to the fundamental question – Whose side is Russia on in Afghanistan?

So, where did the “Russia backs Taliban hence it backs Pakistan” theory come from?

This theory strengthens the Democrats’ narrative that Russia is evil. It intends to save Biden from the Afghan disaster and save his political boat from sinking before the 2022 mid-term polls.

But the problem with intelligent ones is that they consider everyone else fools.

Anti-Russian Propaganda from the West

Radio Free Liberty – Radio Liberty (RFLRL), which has been designated as a NATO Info-war platform by Russia published an article on July 17, 2021, titled “In Welcoming The Taliban, Kremlin Opens Door To A Host Of Criticisms, Diplomatic Uncertainties”. It was the first time Russia was deemed a friend of the Taliban, subsequent to which there has been a barrage of articles trying to cement the same narrative.

Russian Foreign Ministry Spokeswoman Maria Zakharova slammed the West for this concerted campaign. She categorically said that Washington used RFLRL to malign Russia. She said, “Approximately two months ago, practically a meme was launched, a thesis, that it was not important who was guilty of what but that Russia was acting in an unauthorized way because it maintained contacts with the Taliban.”

Zakharova added, “You recall how both the head of the Russian Foreign Ministry and the special presidential envoy were mentioned in every way possible, and the allegedly secret photographs of contacts were being produced although they were all published on the ministry’s website.”

Russia is working alongside Tajikistan to hit the Taliban

TFI has been at the forefront of reporting how Russia, Tajikistan and other Central Asian states are strengthening anti-Taliban forces in Afghanistan. Russia is actually playing the good cop/bad cop game with the Taliban. While it is saying that any future recognition of the violent organization would solely depend on its behaviour and actions, it is also helping Tajikistan take on the Taliban.

Recently, Tajikistan awarded two deceased Afghan political and military leaders, former President Burhanuddin Rabbani and legendary Afghan guerrilla leader Ahmad Shah Massoud, with the ‘Order of Ismoili Somoni’, Tajikistan’s highest honour. Tajikistan is the leading country in helping the Northern Alliance fight against the Taliban. There were reports about Tajikistan openly arming the resistance front which is fighting against the Taliban. The Northern Alliance led by Ahmad Massoud and Amrullah Saleh was said to have received military equipment, weapons, and other supplies from Tajikistan.

For Tajikistan to take such an anti-Taliban line is simply not possible without Moscow’s nod. Therefore, all propaganda linking Russia to the Taliban falls flat on its face, since those who are well aware of the happenings in Asia will know that Russia is, in fact, taking strategic steps to discount the influence of China, while also securing itself against Islamist terror which is bound to emerge from Afghanistan, now that the Taliban is in power in the country.

Yet, Washington fails to read the writing on the wall, or rather, deliberately chooses to ignore it.

During 1989 and 1990, the Berlin Wall came down, borders opened, and free elections ousted Communist regimes everywhere in eastern Europe. But for Russians, the cold war ended only in late 1991 when the Soviet Union itself dissolved into its component republics. Interestingly though, for the United States of America, the cold war never ended.

Read more: The Afghanistan invasion and botched up retreat is a western conspiracy to destabilise India and Russia

Even when Donald Trump won in 2016, American Liberal Media peddled the ‘Russian Collusion’ narrative. The Democrats’ election agenda has always been about containing Russia, stopping Russia, neutralizing Russia, and sanctioning Russia. Russia is projected as the United States’ eternal enemy, and this obsession with Russia has fueled China’s growth, making Beijing America’s number one enemy today. Still, Democrats continue to be fascinated with the idea of taking on Russia.

For Obama and his social media army, Russia was a special target. Between February 20, 2014 – March 26, 2014, Russia annexed Crimea. It was followed up with a referendum in which 97 per cent of Crimeans wished to stay with Russia. The writing was on the wall, but the Obama administration turned Russia into a global pariah with harsh sanctions.

The result of it was Russia’s complete detachment from the West and over-dependence on China. The narrative of the Russia-China nexus (New Red Bloc), which is a figment of imagination of the Western Media, began being pushed day in and day out, convincing the uninitiated that the two nations are all-weather allies.

The world got to know about Biden’s Afghanistan failure only in August, but his administration knew that it was going to be catastrophic and a global PR disaster. So, the “Russia backs Taliban” myth was invented and pushed through the aforementioned portal right after the US troops vacated the Bagram airbase in Afghanistan, which served as the nerve centre of all war operations in Afghanistan. Democrat lapdogs in the US and liberal journalists elsewhere did the rest.

The Democrats’ anti-Russia propaganda has its own purposes. It intends to save Biden from the Afghan disaster and save his political boat from sinking before the crucial 2022 mid-term polls. Joe Biden’s approval ratings have gone into freefall. Just 37 per cent of voters say they would vote for Biden today, while 13 per cent of Democrats say they would vote for Trump today. As such, the Democrats desperately require a scapegoat. And they are trying to make Russia the sacrificial lamb, although a majority of Americans today know that the Afghan debacle is the doing of Joe Biden and his inept administration alone.