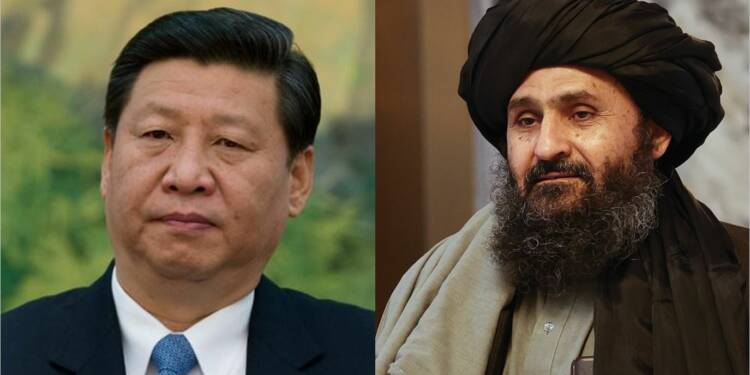 Taliban is now the de facto ruler of Afghanistan. But it lacks one important asset to run a nation – money. Taliban has none of it and this means that the terror group needs a hostage. Guess what, the Taliban has found one and it is the second-largest economy in the world- the People’s Republic of China.

So, we are essentially looking at a situation where China will be forced to fund the Taliban, in order to protect its far Western province Xinjiang from any adverse action by the Afghanistan-based East Turkestan Islamic Movement (ETIM). Chinese President Xi Jinping thinks he will make certain strategic gains by empowering the Taliban and creating security threats for Russia, India, and other regional stakeholders. But the reality is that Beijing is becoming a hostage of the Taliban itself.

Taliban is desperate for money

At the outset, it has become clear that the Taliban cannot rule Afghanistan for very long unless it gets some money. Foreign aid has dried up since the Taliban took over the war-torn nation, prices are surging, the Afghani currency is facing a free fall in its value and Afghan reserves worth $9.4 billion stands frozen.

Make no mistake, the Taliban needs a lot of money. We are talking about at least $5.5 billion a year. This is what the civilian government was spending in its budget before the Taliban took over Afghanistan. Then, the Taliban also needs money to maintain its own expenditure as a terror group, apart from funding its expansionist dreams.

Taliban to rely on Chinese funds:

Taliban spokesman Zabihullah Mujahid has expressly told an Italian newspaper that the extremist group will rely on Chinese money to finance itself following the withdrawal of American troops from Afghanistan and refusal of the Western world to fund a Taliban-ruled Afghanistan.

Mujahid said, “China is our most important partner and represents a fundamental and extraordinary opportunity for us, because it is ready to invest and rebuild our country.”

The Taliban spokesman further explained that there are “rich copper mines in the country, which, thanks to the Chinese, can be put back into operation and modernised. In addition, China is our pass to markets all over the world.”

Why China is forced to fund the Taliban:

China is actually becoming a slave of the Taliban and things can actually fall out of its control at any moment. The Taliban has a strong extortion tool against China called the ETIM, which the extremist group is definitely going to use.

China pays a lot of money to the Taliban and expects that the Islamist terror group won’t say or do anything about Xinjiang, where Chinese authorities torture one million Uighur Muslims in concentration camps. In late July, Beijing even secured a public pledge from the Taliban that it won’t allow the use of Afghan soil to attack China.

So, Beijing wants two things – firstly, the Taliban shouldn’t say anything about what Chinese authorities do to Uighur Muslims in Xinjiang. And secondly, the Taliban should rein in the ETIM that comprises Uighur fighters, who have one goal in their lives – to liberate Xinjiang from the clutches of the Chinese Communist Party.

Simply put, the Taliban is using the ETIM fighters to hold unlimited leverage over China and extract as much money as possible out of the world’s second-largest economy.

Why the people of China are angry:

If you look at it objectively, Xi is actually doing something quite gullible – he is spending billions of Dollars on an Islamist terror organisation and literally taking its word when it comes to China’s national security.

The people of China are offended by their President’s stupidity. When the Chinese State-owned media tried to humanise the Taliban, Chinese social media users hit back on Weibo and questioned why the Chinese State media was trying to exonerate the Islamist terrorist group. The people of China can’t fathom that their President deals with a group that beheads people and torments women.

And then, it’s not just about the lack of morality in dealing with the Taliban. At the end of the day, the Taliban remains a terror group without any properly organised structure. The top Taliban leadership might agree with Beijing when it comes to reining in the ETIM, but what is the guarantee that ground-level commanders or any splinter groups won’t support the Xinjiang-focused militia?

China is effectively becoming a cash cow for the Taliban and also Pakistan, a Chinese stooge that actively supports and guides the Taliban. The Taliban will never stop blackmailing Beijing with the ETIM threat and will continue to milk it for decades to come.

China is used to debt trapping countries like Sri Lanka and Nepal. But when it comes to Taliban-ruled Afghanistan and Pakistan, China is getting entangled in a creditor trap. Taliban admittedly looks forward to China for rebuilding infrastructure and therefore the Xi administration will have to inject loans into Afghanistan.

However, with the Taliban perpetually holding the Xinjiang card, any money that China sends into Afghanistan as loan money is never going to come back. Just like the China Pakistan Economic Corridor (CPEC) worth $62 billion has become a headache for China due to Islamabad’s incompetence to repay debt and a constant threat of insurgent groups, China’s Afghanistan investments are also going to go down the drain.

China is therefore becoming the Taliban’s slave, which is going to cost the second biggest economy in the world heavily.