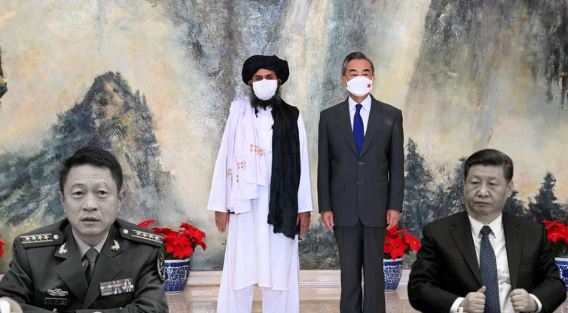 Under the rule of Xi Jinping, China is continuously creating geopolitical blunders. This time the country is trying to play the “good cop, bad cop” role with the Taliban. While it was not long ago when the Chinese welcomed a delegation of the Taliban, Beijing has now sent a veiled warning to the Taliban by appointing a new military chief in Xinjiang who is known for overseeing the Sino-Vietnamese war in the early 1980s.

While China is doing it secretly to make sure not to antagonize the Taliban, but the message is loud and clear, that if the Taliban fails to reign in anti-China activities of the East Turkestan Islamic Movement (ETIM), the PLA could very well carry out cross-border counter-terrorism operation to nullify its threats.

Lt. Gen. Wang Haijiang will be in charge of a major military presence in the northwest region which shares its borders with some unstable Central Asian states, along with Pakistan and Afghanistan, from where the US and NATO troops are withdrawing. Beijing is particularly concerned about the US exit from Afghanistan, as China fears a rise of Islamic extremism along its border, which may later destabilise the Xijiang region. The Xijiang region is where China has been committing human rights abuses on the industrial level, on the ethnic Uighur people. However, this step can backfire given, this disguised Chinese warning to the Taliban will further strengthen an aggressive Taliban and ETIM to spread the menace in Western China.

Lt. Gen. Wang Haijiang’s transfer from Tibet to the Xinjiang Uyghur Autonomous Region comes five years after Chen Quanquo took over as Communist Party chief of the Xinjiang (XUAR) and imprisoned 1.8 million Uyghurs and other Muslim minorities in a network of internment camps in the name of fighting terrorism and extremism.

Because Tibet and Xinjiang are two of China’s most politically sensitive regions, military commanders are usually appointed by the central government, which chooses soldiers who are hard-line authoritarians, according to Jamphel Monlam, a former Tibetan political prisoner now living in the United States.

The East Turkestan Islamic Movement (ETIM) is a militant organization, which seeks to fight against Chinese excesses and abuse of human rights in the Xinjiang province. The ETIM comprises of Uighur fighters, who have one goal in their lives – to liberate Xinjiang from the clutches of the Chinese Communist Party. Over 1 million Uighur Muslims have been dumped like cattle by China in what it calls “internment camps”, which bear an eerie resemblance to Hitler’s concentration camps.

China fears the ETIM. It has accused the organization of carrying out multiple attacks in Xinjiang, while also claiming to have busted a bombing conspiracy at the 2008 Beijing Olympics. The ETIM is also active in Syria’s civil war, where battle-hardened fighters have largely been grouped in Idlib and other northern regions. Back in 2002, The United Nations had classified the ETIM group as a “terror organization”. Interestingly, the Trump administration in 2020 removed ETIM from America’s terror list, saying there was “no credible evidence” that the organization still exists.

According to the UN Security Council, the ETIM has around 3,500 fighters, some of whom reside in the part of Afghanistan that shares a border with China. However, the ETIM’s goal to liberate Xinjiang and carve out a separate East Turkestan is not what entirely worries China. The more concerning factor is the impact a strong ETIM can have on the Chinese BRI not just within China, but all across the region.

These factors have made China follow a dual policy of appeasing the Taliban to act against the ETIM while sending veiled threats for consequences if the Taliban is unable to handle it. Only last week, Chinese Foreign Minister Wang Yi welcomed a delegation of the Taliban, which has been rapidly gaining territory in Afghanistan and is currently fighting for control over major towns. Yi expressed the CCP regime’s expectation that the Taliban will “deal resolutely” with the East Turkistan Islamic Movement (ETIM), which the CCP alleges is leading a separatist movement in Xinjiang.

This kind of dealings and actions which are contrary and tries to place all the checks and balances may sound good in theory but going ahead, it may turn out to be a disaster for the Chinese Communist Party. It may further encourage the Taliban to work with the ETIM and make life hell for PLA troops in the North-Western borders with China.