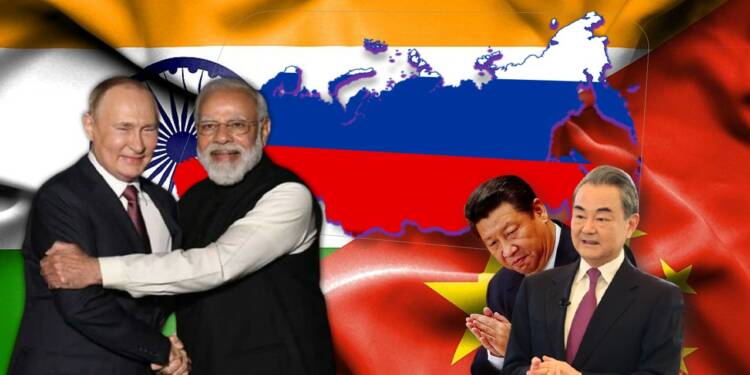 Russian President Vladimir Putin visited India on Monday for the 21st Indo-Russia summit. Both Prime Minister Narendra Modi and Putin looked fresh as ever and hit it off right away as the bubbling camaraderie between the two was caught on camera throughout their meeting. A rattled China took close note of the success of the bilateral meet and instantly recalibrated its plans. Beijing is now trying to placate India by penning and enunciating beautiful, honey-glazed prose pieces.

Reportedly, Chinese Foreign Minister Wang Yi recently held a virtual meeting with the outgoing Indian Ambassador to China Vikram Misri, who is nearing the end of his term. In the meeting, Wang Yi, taking a rather 180 on his government’s stance, waxed lyrical about the relationship between the two countries and stated that how the Himalayas could not even move it.

According to a press report, Wang Yi said, “China and India are two ancient civilizations, two emerging economies, and neighbors that cannot be moved away. When we build mutual trust, even the Himalayas cannot stop us from friendly exchanges.”

He further added, “Without mutual trust, it is difficult to bring the two sides together, even if there are no mountains in the way. China and India should become partners and friends. The important consensus that China and India should not be a threat to each other, but an opportunity for each other’s development, which reached by the leaders of the two countries, should continue to be adhered to.”

It’s rather curious that Wang used Wuhan in his statement when the Chinese province has been under the microscope for its infamous Virology Lab. India on several fronts has openly batted for an independent investigation into the origins of the virus and pointed towards the Virology Lab as the ground zero for the virus.

Perhaps, Wang thought that playing the emotional card by using an Indian state would have got New Delhi to drop its demands for the investigation. However, New Delhi is immune to such romantic attempts.

Moreover, Wang’s statements come at the heels of Indian Defence Minister Rajnath Singh raising the issue of Chinese military aggression in eastern Ladakh in a bid to isolate Beijing.

During the 2+2 Ministerial dialogue held alongside the Modi-Putin summit, the union minister said, “The pandemic, the extraordinary militarisation and expansion of armament in our neighbourhood and the completely unprovoked aggression on our northern border since early summer of 2020 have thrown in several challenges.”

Without naming China, Singh further said, “India is confident of overcoming these challenges with its strong political will and inherent capability of its people. Recognising that its development needs are colossal and that its defence challenges are legitimate, real and immediate, India seeks partners who are sensitive and responsive to India’s expectations and requirements.”

By criticizing Chinese aggression and also making it clear that India expects its partners to understand its sensitivities, New Delhi has asserted that it plans on reaching a broad understanding with Moscow against Beijing’s militarism.

Read More: India and Russia— Best friends forever and an answer to the West

Despite harbouring dreams of annexing the Far east, Beijing has been trying to bring Putin in its corner but the decades-old relations with India continue to prove to be a major hindrance. As is widely known, Russia has begun delivering the formidable S-400 air defence systems to India this month. China certainly hasn’t been able to come to face the present reality of the situation.

In a piece titled, “Russia, India eye finalizing S-400 deal as Putin visits Modi,” Xi Jinping’s mouthpiece, Global Times, feeling hurt, tried to put up a brave front by remarking that the S-400 systems would not do India any good.

The self-consoling, teary-eyed piece read, “Some Indian media outlets reporting the meeting hyped the fact that the Russian weapons system could help India counter China in border areas, with the aim of driving a wedge between China and Russia, but Chinese observers called it a “low ploy” and said that in military terms, the Russian weapons system will not give India an advantage with China, and the high confidence in China-Russia relations cannot be stirred up by just a few reports.”

Beijing is being sidelined and it fears the thought of it:

Additionally, Russia and India have signed and shook hands on the deal to manufacture over 6 lakh AK-203 assault rifles, which will become the standard piece of equipment for the Indian army – thereby gifting another body blow to China.

Russia and India have been friends forever and China cannot change it. It appears to be extending an olive branch, but it is simply an emotional outburst after seeing the flurry of deals signed in the last two days.

Trying to serenade India with fancy words and statements is not going to work. If it is indeed serious of forging relations that even the Himalayas cannot move, it should start by adhering to India’s demands on the border areas.